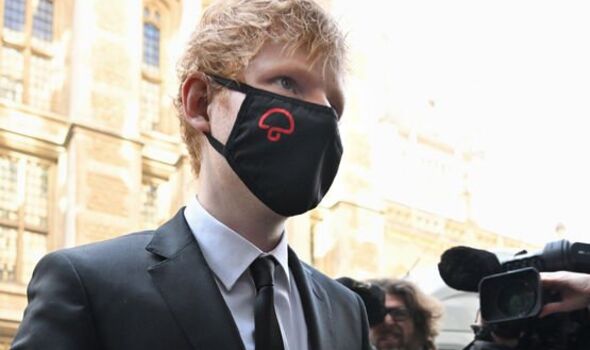 He insisted he was not a “magpie” ripping off other artists, revealing he creates most of his smashes in less than two hours.

The singer-songwriter, 31, is fighting a High Court claim by Sami Chokri and Ross O’Donoghue that he copied part of their song Oh Why for his 2017 hit. They claim the melody of the famous hook “oh-I-oh-I-oh-I-oh-I” was their creation.

Ed told the court: “Prior to this litigation, I was not aware of either Sami Chokri or Ross O’Donoghue and had not heard of the EP Solace on which Oh Why apparently featured.”

About his own songwriting he said: “As I hear a beat, I hear a song and melody comes out.

“I write a lot of songs and if I haven’t written a song within two hours, I see it as a failure.

“If it sounds good, I keep it, I frequently write and record a number of songs in a day.”

“Almost all of my songs are written in under two hours. I think of them as sort of ‘excitement bottles’ – if a song is working, the excitement pushes it to the point where it’s finished; if it’s not, then I’ll leave it and move on to something else.”

Mr Chokri and Mr O’Donoghue, suggested that Sheeran regularly “borrows ideas and throws them into his songs, sometimes he will acknowledge it but sometimes he won’t”.

Ed replied: “If Mr Sutcliffe would have done his research”, he would have known there were “lots” of artists he had cleared parts of songs with.”

He also said did not recall ever meeting Mr Chokri despite the songwriter’s claim they did so at a Nando’s in central London.

Ed, who has had more than 40 hit singles, later told the London hearing he approaches writing without a “premeditated thought process” and “makes things up as I go along”.