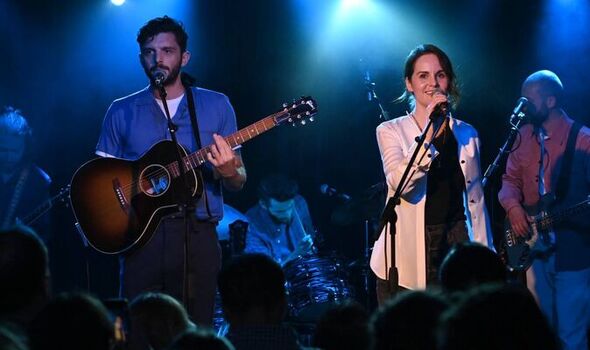 The pair – billed as Michael and Michelle – wowed 300 fans at a sell-out show at one of London’s trendiest underground music venues.

A casual off-set jam led to practice sessions before the pals took to a recording studio in Los Angeles last year to record EP The Watching Silence.

After its recent release, the pair took to the stage of Omeara in London Bridge on Monday night.

Michelle, 40, looked worlds apart from her Downton character as she rocked the mic, while Michael, 33, sang and accompanied on acoustic guitar.

The singer cut a stylish figure in dark trousers and a black top worn beneath a white blazer, while her bandmate, who is in a relationship with another Downton star, Laura Carmichael, 35, sported black jeans with a grey shirt.

The happy pair kissed at the end of the set.