Demi Rose is well-known for her raunchy Instagram outings and she really ramped up the temperature with her latest offering.

The bombshell, 25, took to the social media platform to share an eye-popping clip of herself posing topless.

Demi oozed sex appeal as she basked in the sunshine with her enormous assets on show – with just her long brunette locks protecting her modesty.

The babe was seen perched above the crystal clear waters and finished her jaw-dropping look with a dusting of makeup.

Frank Sinatra's classic 1950 song You Make Me Feel So Young playing in the background as she turned her camera to show the glimmering Indian Ocean. Wearing her lustrous tresses in a sleek blowout with a centre-parting, the Birmingham native wowed as she posed up a storm.

Earlier this week Demi left little to the imagination as she poured her hourglass curves into a daringly plunging gold bikini and black bottoms.

Demi, 25, let her famous figure do the talking while she struck a pose alongside her equally stunning friends.

The brunette bombshell put on an eye-popping display as her assets threatened to spill out of the daringly plunging neckline of the gold bikini top, sending her fans wild.

Demi's hourglass proportions stole the show under the clingy and sparkly gold top, which she paired with a pair of high-waisted black bikini bottoms.

Wearing her dark hair in sleek waves as it cascaded arrow her body, she added a subtle slick of lipgloss and lashings of mascara to enhance her looks.

One video also showed her sipping a cocktail as she pouted for the camera, no doubt leaving her fans very hot under the collar. 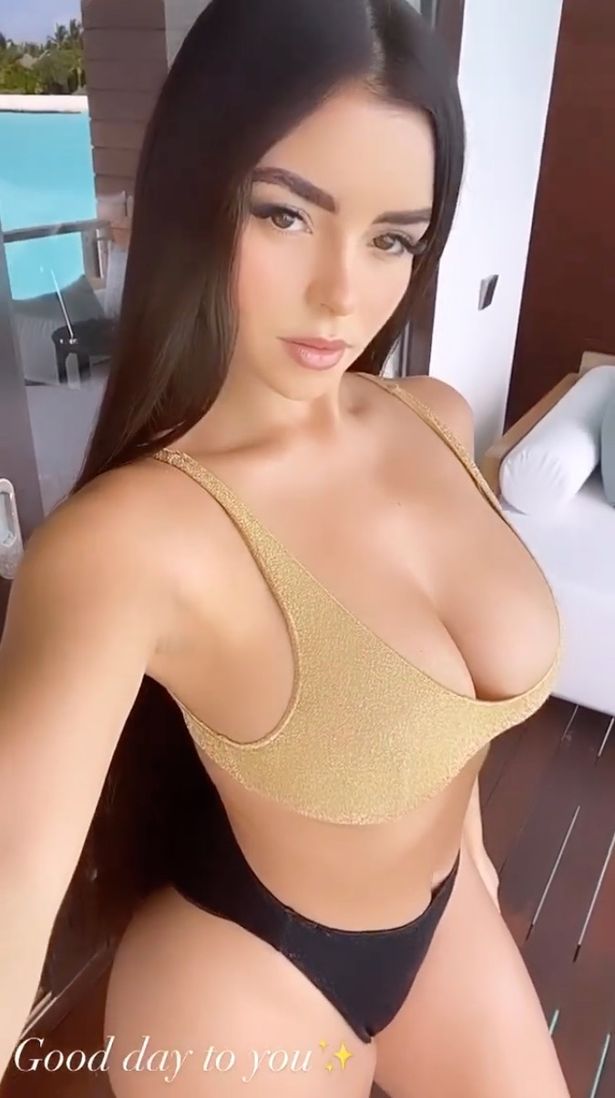 The Instagram model, who boasts 14.8million followers, is no stranger to stripping off to skimpy outfits to wow her fans.

One of her most recent ones saw her strip down to a seriously skimpy cream leotard with a very high thigh split.

She highlighted her peachy derriere in the skimpy nude thing bodysuit as she struck a pose against a wall.

The bodysuit was cut so high along her bombshell body that it gave a glimpse of both her toned abs and ample assets, leaving little to the imagination.

Demi first found fame in 2016 after sharing a string of saucy selfies to social media, where she was quick to rack up an impressive online following after being spotted out with Kylie Jenner's ex, Tyga.