BTS Will Debut 'Butter' at the 2021 Billboard Music Awards 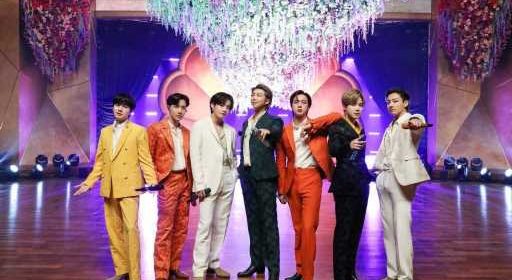 BTS’ upcoming single “Butter” is highly anticipated, and now fans know when they will see Jin, Suga, J-Hope, RM, Jimin, V, and Jungkook perform the song for the first time. On May 11, BTS announced they will have their debut performance of “Butter” on May 23 at the 2021 Billboard Music Awards.

BTS will release ‘Butter’ before the Billboard Music Awards

On April 26, a video was streamed on the BANGTANTV YouTube channel from 10 a.m. EDT to 11 a.m. EDT. During the hour-long livestream, fans watched an animated stick of butter melt into a heart.

At the end of the livestream, the logo for BTS’ single “Butter” was revealed along with a release date of May 21 at midnight EDT and 1 p.m. KST.

According to a press release about the single, “‘Butter’ is a dance pop track brimming with the smooth yet charismatic charm of BTS. This song is the second English single following ‘Dynamite’ released in August last year.”

On April 29, Billboard announced the finalists for the 2021 Billboard Music Awards. BTS received a total of four nominations, breaking their previous record of achieving two nominations in the same year.

For the fifth year in a row, BTS are nominated for Top Social Artist. They are nominated alongside BLACKPINK, Ariana Grande, SB19, and SEVENTEEN. BTS received a nomination for Top Duo/Group with AC/DC, AJR, Dan + Shay, and Maroon 5.

The band is also nominated for Top Song Sales Artist along with Justin Bieber, Megan Thee Stallion, Morgan Wallen, and The Weeknd. For their fourth nomination, the members of BTS are nominated for Top Selling Song for their single “Dynamite.”

The band will perform ‘Butter’ at the Billboard Music Awards

On Twitter, BTS announced they will perform “Butter” at the 2021 Billboard Music Awards, tweeting, “We can’t hold it in any longer! Our debut performance of ‘#BTS_Butter’ will be at this year’s @BBMAs! Watch on Sunday, May 23rd at 8pm ET/5pm PT on @nbc.”

The band first performed at the Billboard Music Awards in 2018 when they performed their song “Fake Love.” In 2019, they performed “Boy With Luv” with Halsey at the awards show.

At the 2020 Billboard Music Awards, Jin, Suga, J-Hope, RM, Jimin, V, and Jungkook put on a virtual performance due to the coronavirus (COVID-19) pandemic. For the 2020 awards show, the band performed their song “Dynamite.”

BTS’ debut performance of “Butter” will take place two days after the song is released and will be their fourth performance at the Billboard Music Awards.