2 Chainz Performs 'Bet It Back,' '10 Bracelets' Live for Vevo Ctrl 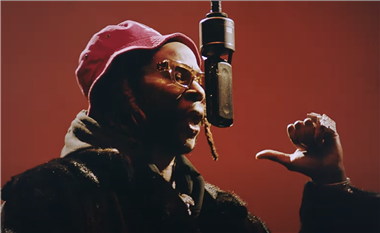 2 Chainz performed two songs for the Vevo Ctrl series, offering intimate renditions of “Bet It Back” and “10 Bracelets.” The videos, directed by Austin Prahl, see the rapper performing solo in a minimalist cube-shaped studio.

Both tracks come off the rapper’s latest album, Dope Don’t Sell Itself, which arrived Feb. 4 via Def Jam. The LP follows 2 Chainz’s 2020 album So Help Me God!.

The rapper has unveiled several music video for songs on the new album, including “Million Dollars Worth of Game,” featuring 42 Dugg, and “Pop Music,” featuring Moneybagg Yo and Beatking. He also recently performed “Lost Kings” on The Late Show with the help of Lil Durk and Sleepy Rose.

2 Chainz is currently on the road with Rick Ross, Lil Kim, Jeezy and Gucci Mane for the Legendz of The Streets tour. The trek, which kicked off Feb. 3, includes stops in Memphis, Tampa, and Detroit.