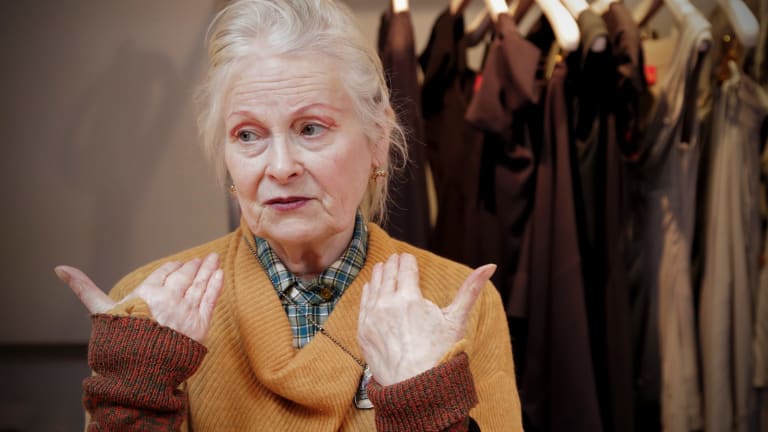 Still of Vivienne Westwood from documentary

In the opening scene of this entertainingly scatty biopic, the British fashion designer Vivienne Westwood goes limp with boredom of the thought of having to put her life into perspective. 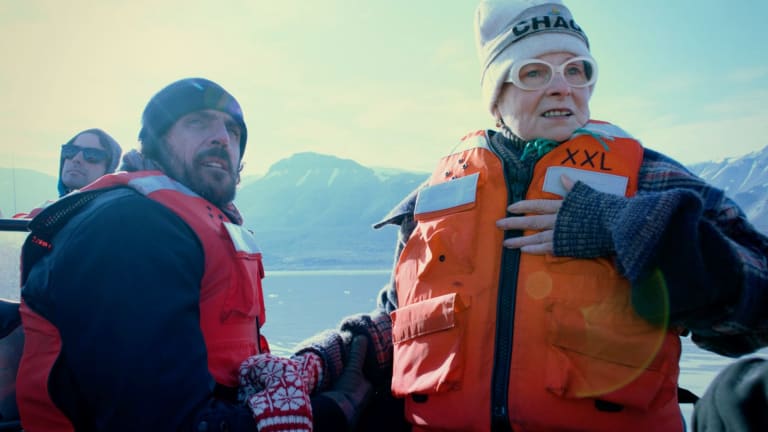 When asked about her part in the rise of punk rockers the Sex Pistols, she looks as if she's given up altogether. Then she rallies and somehow the tales are told.

The most consistently flamboyant of fashion's wild spirits, Westwood, now 77, has done her best to maintain her maverick status over the years. Nonetheless, the Establishment has heartily embraced her. She's twice been judged British Designer of the Year, as well as being made a Dame – a paradox she acknowledges without seeming to know what to do about it.

The film is a debut feature by Lorna Tucker, a former fashion model and maker of short films and videos. She was also a friend of Westwood's before they began work together. No longer. Westwood thoroughly dislikes the documentary, which was shot as her company opened flagship stores in Paris and New York with balloons, plastic streamers and a loud fanfare.

Westwood did not attend the New York launch, preferring to remain at home in London trying to think up ways of making her business "more ecologically sustainable" – despite the balloons and streamers – and she believes Tucker has underplayed her activist efforts. It's an opinion which seems a bit precious, for the film is a fair and, I think, a well-meaning attempt to cover her life in all its dizzying variety – hence the scattiness.

Emblematic is a woolly cap with the word "chaos" inscribed in capitals across the front of it. It's a relic from Westwood's punk days with Malcolm McLaren, once her lover and business partner, and she's still very fond of it. For one thing, it accompanied her on the trip to the Arctic which led to her collaboration with Greenpeace on an environmental campaign in 2014.

She and McLaren set up her first boutique in the Kings Road in 1971, changing its name and the Westwood designs it sold as the mood took them. Rubber bondage suits complete with gimp masks characterised her "rubber wear for the office" phase. Then came the Sex Pistols, whose members were drawn from a group of boys who hung out at the shop. In those days, her prevailing philosophy was "down with everything" yet somehow her love of good craftsmanship managed to survive everything.

It also led to her partnership with her former design student Andreas Kronthaler, an Austrian, to whom she's been married for 12 years. It was he who encouraged her to move out of the council flat in Clapham, where she had been living for decades.

Because of the 25-year age gap, he was originally regarded with suspicion by those closest to her but, says her son Joe, they've come to realise he's good for her and the company. Tall and handsome with – it's been noted – a passing resemblance to Sacha Baron Cohen, he has a love of fancy dress which matches her own and they now design together, working by draping and pinning the fabrics on the model.

It can get tricky. A little discreet eye-rolling goes on in the background as Westwood inspects racks of designs for an upcoming collection, deciding they're all crap and she doesn't really want to put any of them on the runway. Yet she and Andreas weather this storm, like many before it, and the show goes on.

As we leave her, she's saying she really needs to get a grip on the company and all it does, but she doesn't seem to be infused with optimism about her prospects for success. The man with the overview is the company's Italian CEO, Carlo D'Amario, who has masterminded its expansion, and it's clear that downsizing is not on his horizon. He finishes up with the observation that she's now as much a British institution as Big Ben.