Marvel movies are always packed with references to other MCU offerings, and another one has been spotted in Thor: The Dark World.

When we first reunite with Dr Erik Selvig (Stellan Skarsgård), he’s got a chalkboard behind him as he tries to explain the nine realms to fellow patients in the mental institution he went to, a result of Loki messing with his mind in Avengers Assemble.

As pointed out by a Reddit user, one of the names on the board is “Nidavellir”, teasing an Avengers: Infinity War storyline where Thor (Chris Hemsworth) goes to the realm to get a new weapon after Hela destroyed Mjolnir in Thor: Ragnarok. 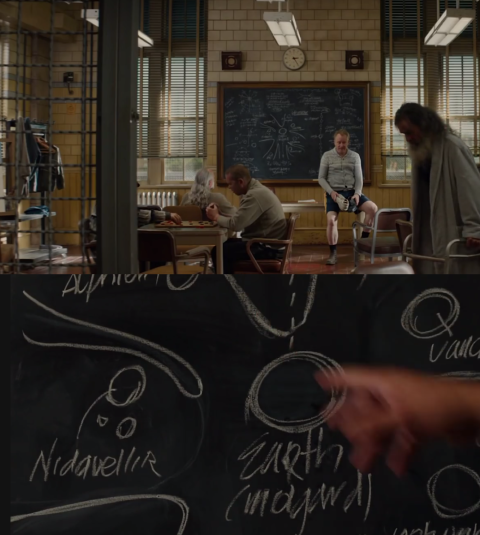 Of course, Nidavellir has its basis in Norse mythology, so it’s not like Marvel came up with it for Thor: The Dark World and then used it in Infinity War, but it’s still a fun reference in hindsight.

As for the movie itself, Chris Hemsworth wasn’t exactly glowing in his appraisal of the derided Thor sequel.

“The first one is good, the second one is meh. ‘Meh’? That’s cold. What masculinity was, the classic archetype – it just all starts to feel very familiar,” he noted. “I was so aware that we were right on the edge.”