The newly-unveiled trailer raises issue among comic book fans as it reveals that Bloodsport is responsible for putting Superman in the ICU in addition to revealing the movie’s villain.

AceShowbiz -“The Suicide Squad” has got a brand new trailer to hype the movie. Released on Tuesday, June 22, the video opens with scenes that highlight how Amanda Waller (Viola Davis) takes an extreme way to recruit Bloodsport (Idris Elba).

During her visit to jail to meet Bloodsport, Amanda states the fact that he was responsible for putting Superman in the ICU with a kryptonite bullet. He initially refuses her offer to join the team, but when his daughter’s future is brought up, he lashes out at Amanda before he finally understands the severity of the mission.

The trailer also reveals the team’s mission for the first time, which is to destroy everything related to Project Starfish. Despite not naming the one behind it, the mission is quickly linked to DC Comics villain, Starro the Conqueror.

Starro is a giant psychic starfish from space who can shoot lasers from his tentacles. He was the first villain that the Justice League of America ever fought in 1960’s “The Brave and the Bold” #28.

Among the two main reveals in the trailer, the Superman connection has apparently ticked off comic book fans. Many voiced doubt that Bloodsport was able to put Superman in the ICU with a kryptonite bullet.

Catching wind of the criticism, the movie director James Gunn tweeted a screenshot of a page from a Superman comic that shows Bloodsport’s connection to Superman’s medical emergency does have precedent. 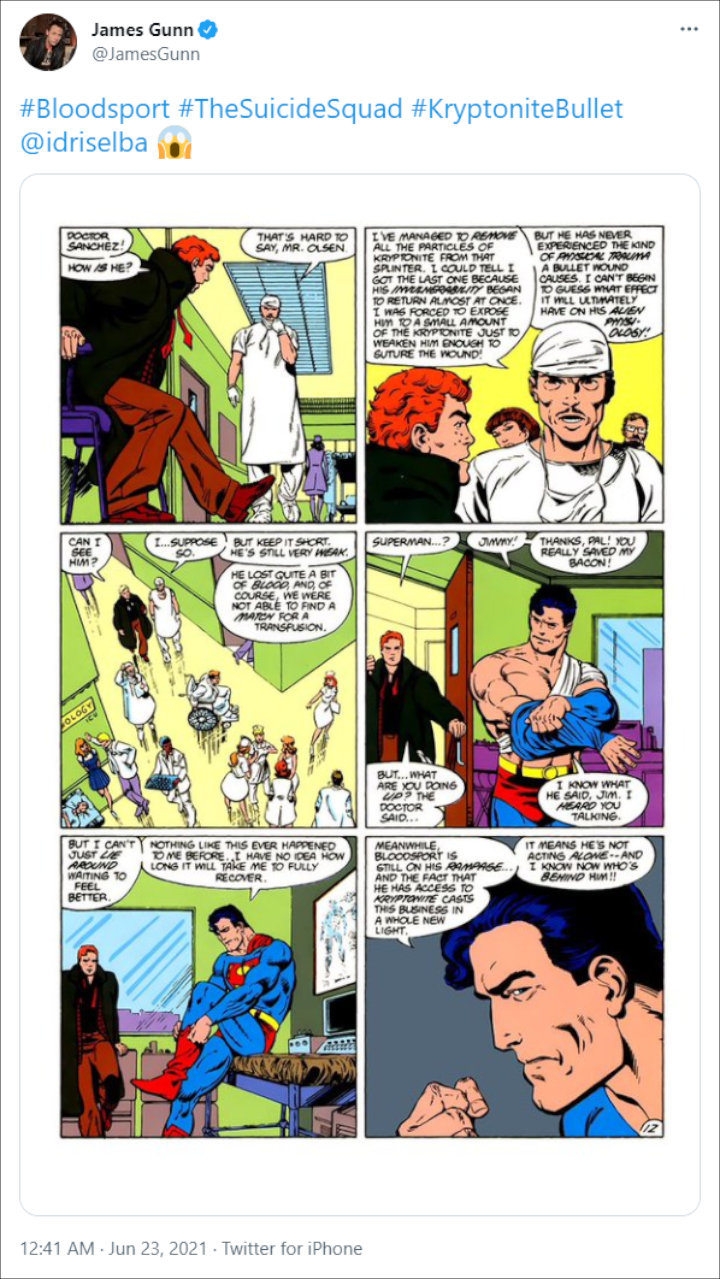 Gunn also explained to IGN the movie’s connection to DCEU. “Bloodsport is in prison for putting Superman into the ICU with a kryptonite bullet,” he stressed. “Yes, ‘The Suicide Squad’ is a part of the DCEU, but I don’t know which Superman it was because I don’t cast the next Superman. So it could be Henry [Cavill]; it could be somebody else. It’s whoever people decide on other than me.”

In “The Suicide Squad”, Amanda assembles “a collection of cons, including Bloodsport, Peacemaker, Captain Boomerang, Ratcatcher 2, Savant, King Shark, Blackguard, Javelin and everyone’s favorite psycho, Harley Quinn. Then arm them heavily and drop them (literally) on the remote, enemy-infused island of Corto Maltese. Trekking through a jungle teeming with militant adversaries and guerrilla forces at every turn, the Squad is on a search-and-destroy mission with only Colonel Rick Flag on the ground to make them behave…and Amanda Waller’s government techies in their ears, tracking their every movement. And as always, one wrong move and they’re dead (whether at the hands of their opponents, a teammate, or Waller herself). If anyone’s laying down bets, the smart money is against them-all of them.”