‘The Rocketeer’ at 30: Remembering the Disney Cult Favorite

The Rocketeer was the first movie to premiere at the El Capitan Theatre, following two years of extensive renovations toward recapturing some of its original architectural features. The Walt Disney Company, which had invested millions of dollars to restore the L.A. landmark and continues to use it for major releases, selected a fitting motion picture for the grand debut. Both the venue and the action-adventure film listed on the marquee were both loving tributes to the art deco lined streets of Old Hollywood.

ET was at the joint celebration in June 1991 when the movie’s stars — Billy Campbell, Jennifer Connelly and Timothy Dalton — took part in the ribbon-cutting ceremony. (A photo of this moment can be found in a display case stationed on the second floor of the El Capitan.)

Standing under the rainbow-colored marquee, Connelly remarked to ET that it was “a beautiful theater.”

Campbell, a TV veteran but cinema newcomer, reflected on being cast in the movie’s leading role, which Disney had reportedly been pushing for Tom Cruise to take up. 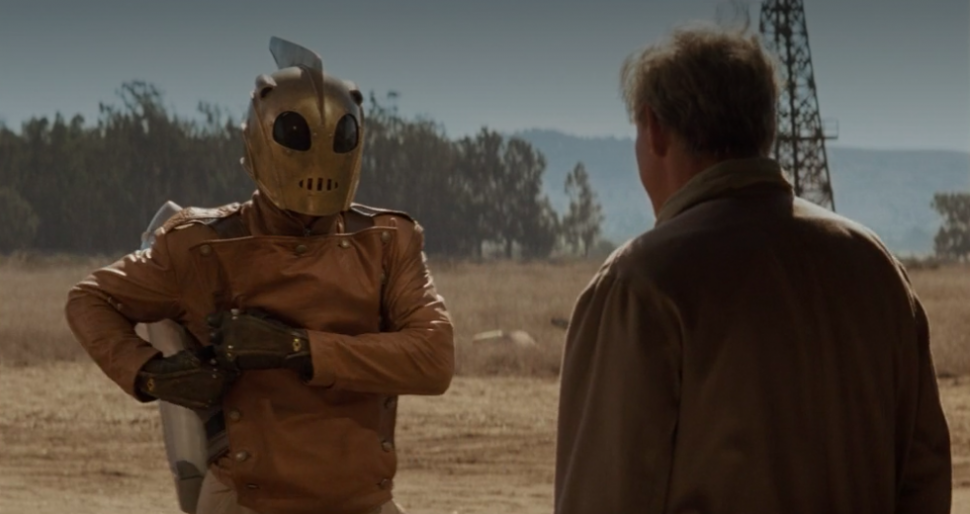 “I did feel a bit of pressure in the beginning,” Campbell told ET, citing that director Joe Johnston and the film’s producers had gone out on a limb for him to be hired in lieu of an established name like Cruise.

Long before the MCU, Disney first tried its hand at comic book adaptations with 1990’s Dick Tracy, directed by and starring Warren Beatty as the titular crime fighter. The studio lined up another cartoon hero to hit the big screen soon after, this one from artist and writer Dave Stevens’ homage to matinee serials. (Hey, it worked for Indiana Jones.)

On top of having Johnston’s support, Campbell joked that his facial likeness to the drawn character might have been an extra incentive.

“I [looked] like the guy. That [helped] a lot,” Campbell told ET on the set in December 1990. The film’s massive production, as well as the crew’s attention to the details of the time period, was an amazing sight for Campbell to take in day to day. “I wake up every morning and I’m astounded by how big this seems.”

The Rocketeer centered around down-on-his-luck test pilot Cliff Secord (Campbell), who discovers a top secret jetpack circa 1938 Los Angeles, which made for some appealing source material by itself. Throw in a Betty Page-inspired love interest (Connelly), a Nazi spy who by day is undercover as a famous Hollywood actor (Dalton), along with real-life figure Howard Hughes and an assortment of gangsters for good measure, there was more than enough to play with.

Connelly, already having starred in notable films such as Once Upon a Time in America and Labyrinth, appreciated how The Rocketeer had managed to capture another era of movies both on-screen and behind the scenes. “It’s sort of like an Old Hollywood epic,” Connelly told ET in 1991.

The Rocketeer also showcased what were then groundbreaking special effects, courtesy of Industrial, Light and Magic. But upon reading the screenplay’s descriptions of the protagonist soaring through the clouds and blasting off atop Griffith Observatory, it was difficult for the cast to imagine how those moments would be taken seriously by audiences

“It was hard for me to visualize all of the flying stuff,” Connelly said. Back on the set, Campbell had admitted to ET that he, too, had similar concerns before filming began. Those fears were eventually put to rest after they watched Johnston’s previous film, Honey, I Shrunk the Kids. In particular, Connelly praised the bumblebee action sequence, which provided a vision for how Johnston would approach their own flying set pieces. “It made a lot more sense after that,” she added. (Meanwhile, Johnston is slated to direct the upcoming Honey, I Shrunk the Kids sequel, which will see Rick Moranis returning as Wayne Szalinski.)

Johnston’s experience with jetpacks actually goes back to the early days of his career at Lucasfilm. Among his many contributions as a production designer for the original Star Wars trilogy, he’s credited with designing the costume for Boba Fett, the fan-favorite character whose popularity steadily rose in the 40 years since his debut and shows no sign of slowing down. 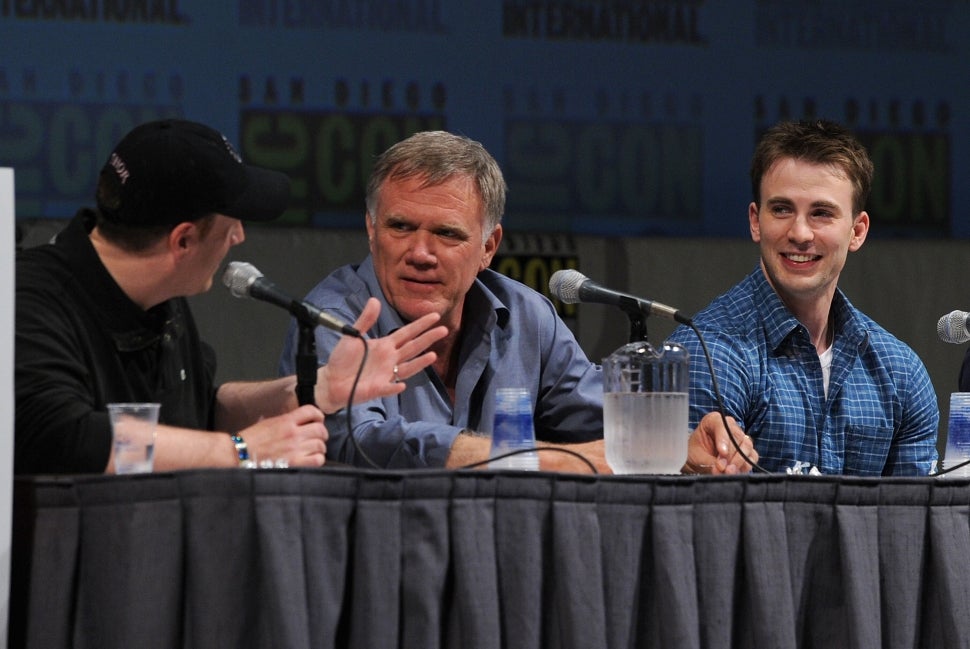 While The Rocketeer’s story about a hero who fights bad guys with the help of a body-strapped flying apparatus is reminiscent of Iron Man, Johnston was approached 20 years later by Marvel about a different Phase One character. Perhaps impressed by his portrayal of a good-hearted average Joe stepping up to fight Nazis, he was tapped to helm 2011’s Captain America: The First Avenger.

Whether it’s because of these modest ties to the Star Wars and Marvel universes (or maybe just on account of the late James Horner’s majestic score), The Rocketeer has endured three decades later thanks to a passionate cult following. Its steady pop culture presence even led to a recent spinoff animated series for Disney Junior that ran for two seasons. (Eagle-eyed fans visiting Disney parks might even spot a miniature Rocketeer figure on display inside a popcorn cart.)

The movie’s longevity also benefits from the suave on-screen presence Dalton brought to his antagonist role. Back at the premiere, he revealed why going up against The Rocketeer was a welcome change of pace after playing double-oh-seven.

“When you’re a villain you can be [whatever] the hell you want and that’s a lot more fun,” said Dalton, adding that he was looking forward to the audience’s reaction to his character’s demise in the movie’s explosive finale. He said, “I hope [they] cheer when I go!”

The Rocketeer and both seasons of its Disney Junior series are streaming on Disney+.