The David Spade Joke That Went Too Far

Roasting your friends, family, and public figures is all part of the gig for professional comedians, but if you’re gonna take a swing at a fellow star, you’ve got to be prepared for some hurt feelings. A lesson David Spade (aka Joe Dirt and aka Emperor Kuzco from “The Emperor’s New Groove”) learned the hard way back in the ’80s.

Spade has been in the comedy game for a long time, and he’s never been known as an especially mean or low-blow-throwing comedian. In fact, most of his sharpest barbs are directed toward himself. He’s also been tapped to replace Chris Harrison as the host of “The Bachelor” spinoff “Bachelor In Paradise.”

But everyone’s got a few skeletons in their closet. And Spade’s involve a joke on “Saturday Night Live,” a feud, and former “SNL” star Eddie Murphy. Here’s the lowdown on the joke that crossed the line. Well, it crossed the line according to at least one celeb. 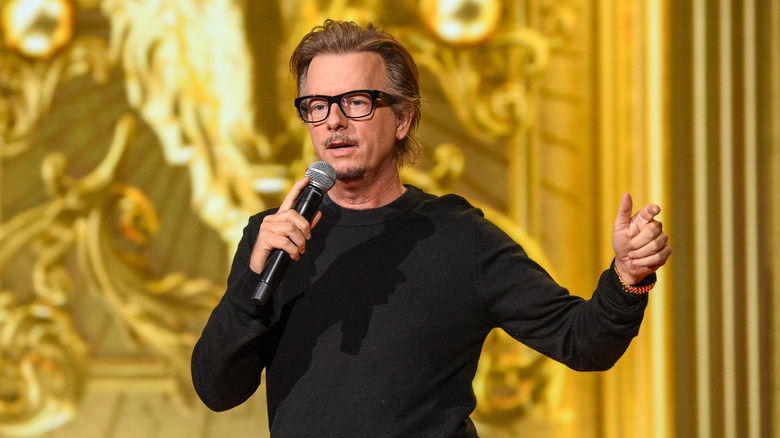 Back in the late ’80s and early ’90s, David Spade had a running bit on the Weekend Update segment of “Saturday Night Live” called “Hollywood Minute” — in which he would roast celebrities. Pretty simple. In his memoir excerpted by Salon, Spade wrote that, “As time went on, I hit some peeps pretty hard, but I only did so if I felt they deserved it. It’s a fine line between clever and just mean. I did cross it a few times, but I went for laughs.”

But there was one joke that sparked a decades-long rift between himself and Eddie Murphy. Murphy had just put out two films in a row that bombed, and Spade joked, “Look, kids, a falling star! Quick, make a wish…”. It didn’t seem like a big deal to Spade, but after the segment aired, Murphy reached out to the young comedian personally to yell at him about the joke on the phone. According to Spade, Murphy said things like, “Who the f*** do you think you are?!” and claiming, “You wouldn’t have a job if it weren’t for me.” For years, Murphy said the joke was the reason he wouldn’t return to “SNL” to host.

It wasn’t until 20 years later on a chance run-in that Spade says he and Murphy finally buried the hatchet. All’s well that ends well.