‘The Apology’ Review: Regrets, He’s Had a Few 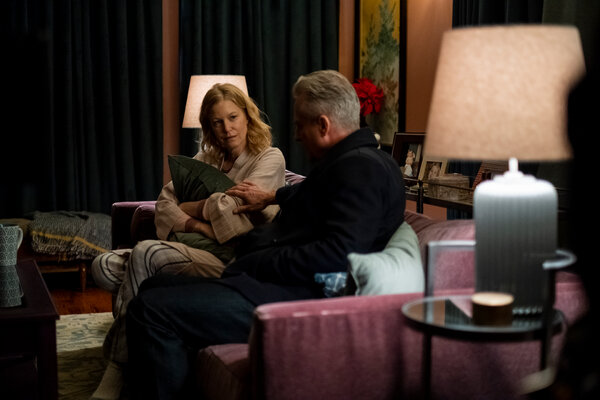 “The Apology” might arrive a week before Christmas and take place on Christmas Eve, but this deeply depressing picture is less ho-ho-ho than no-no-no.

With the help of an isolated home, a convenient snowstorm and essentially two actors (unless you count Janeane Garofalo’s pop-in, pop-out turn as the best friend), the writer and director, Alison Star Locke, stirs up a turgid tale of grief, guilt and attempted atonement. It all starts innocently enough as Darlene (Anna Gunn), a sober alcoholic, is preparing to host a family Christmas for the first time in the two decades since her teenage daughter, Sally, disappeared. Darlene, though — who blames herself for being drunk at the time of the disappearance — is clearly a mess.

Just as she’s about to topple off the wagon, her long-estranged former brother-in-law, Jack (Linus Roache), arrives bearing surprise gifts and shocking secrets. Jack, it turns out, has feelings — oh boy, does he ever — and he would like to share. First, though, for safety’s sake, he’ll just show Darlene his collection of zip ties and move the kitchen knives out of her reach. Now that they’re both comfortable, the talking can begin.

Unfortunately, it never seems to end. A play-like trudge through seesawing power dynamics, bursts of violence, perpetual gloom and a ludicrously attenuated finale, “The Apology” could have doubled its tension by halving its running time. When the resolution of a movie depends in part on a fortuitously constipated dog, the only apology required is from whoever convinced you to watch in the first place.

The Apology
Not rated. Running time: 1 hour 31 minutes. In theaters and available on Shudder.