Spider-Man: Into the Spider-Verse: Trailer, release date, cast and everything you need to know

Marvel fans will get their wish when Miles Morales swings into action in this year’s animated outing Spider-Man: Into the Spider-Verse.

The LEGO Movie duo Phil Lord and Christopher Miller are behind the entirely new take on the Spider-Man Universe. Unconnected to the Marvel Cinematic Universe, the new movie sees Miles discover the limitless possibilities of the Spider-Verse, where more than one can wear the Spider-Man mask.

Multiple Spider-Men you say? We’re sold, so here’s everything you need to know about Spider-Man: Into the Spider-Verse.

Spider-Man: Into the Spider-Verse release date: When it is coming out?

As with MCU movies (well, up to Ant-Man and The Wasp), UK fans will be getting the new animation early, by a couple of days anyway.

Spider-Man: Into the Spider-Verse trailer: Watch it here!

We’ve so far had three trailers for Spider-Man: Into the Spider-Verse, starting with the teaser trailer back in December 2017.

This one just introduced us to Miles as he swung through the city, before sitting down with another Spider-Man to ask: “What, so how many of us are there?”

It also introduced the older version of Peter Parker, who becomes a mentor to Miles – as well as another Spider-Man in the form of Spider-Gwen.

The most recent trailer, released at the start of October, hinted at the danger that Miles has to face and overcome, with an appearance from Kingpin and reference to a “collider” that could destroy Miles’s hometown of Brooklyn.

Luckily, he’s got more than enough Spider-Men to help him. We also get our first look at Spider-Man Noir, Peni Parker and, erm, Spider-Ham (more on them in a bit).

Fans also think there was a cool Black Panther reference in the final shot.

Spider-Man: Into the Spider-Verse cast: What’s a Spider-Ham?

We know what you really care about though is who’s voicing all of the other Spider-Men in the movie, aside from Miles. First up, there’s Hailee Steinfeld as Spider-Gwen, AKA 15-year old Gwen Stacy, who is pulled from her world into Miles’s and must team up with him to battle New York’s villains. 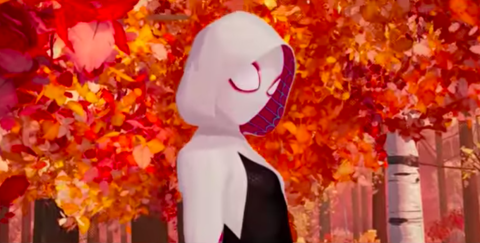 Miles is mentored by an older, wiser and slightly embittered Peter Parker, voiced by New Girl star Jake Johnson, who is given a new positive outlook on life by Miles, even if he’s apparently jealous of Miles’s powers and abilities.

Rounding off the Spider-Men that we know so far are Nicolas Cage as Spider-Man Noir (a darker take on Spider-Man, usually based in the Great Depression of the 1930s), Orange Is the New Black‘s Kimiko Glenn as Peni Parker (a Japanese-American student from Earth-14512 who pilots a suit known as the SP//dr) and John Mulaney as Spider-Ham.

Yes, Spider-Ham, AKA Peter Porker, an animal parody of Spider-Man created by Tom DeFalco and Mark Armstrong, who was born as a spider and morphed into a pig after he was bitten by animal scientist May Porker when she was irradiated.

The movie also features Liev Schreiber as villain Wilson Fisk, AKA Kingpin, and Lily Tomlin as Peter’s Aunt May.

Just because we haven’t seen them in the trailer though, don’t rule out any further Spider-Men from appearing in the movie.

Ant don’t confuse it with this.

Spider-Man: Into the Spider-Verse plot: Will we see Venom?

Aside from what we’ve seen in the trailers, the plot of Spider-Man: Into the Spider-Verse has been kept pleasingly under wraps, so could one big surprise be awaiting us in the form of Tom Hardy’s Venom?

Venom ended with a scene from the upcoming animation, starting with the caption: “Meanwhile, in another universe.”

Here we saw Miles visit the grave of the late Peter Parker, before he gets spooked by a still living Peter – the Spider-Man from another universe – and Miles accidentally knocks Peter out, forcing him to flee with the unconscious body when the police arrive.

It doesn’t have any direct links with the rest of the movie, but it does indicate that Venom and Spider-Man: Into the Spider-Verse exist within the same timeline, meaning that the anti-hero could make an appearance in the upcoming movie – or the two properties could cross over at a later date.

One worry for any casual Spider-Man fan who might just know the character from the movies could be that the movie will just be for the comic-book fans, given the multiple references to date in the trailers.

However, co-director Bob Persichetti told Bustle that while it was the “biggest challenge” they had, the movie does appeal to fans both new and old, so expect the movie to act as a sort of origin story for Miles, as well as delivering the fan-pleasing Easter eggs and references.