Simu Liu Slams Quentin Tarantino’s Anti-Marvel Comments: You Don’t Get to Point Your Nose at Me

The ‘Shang-Chi and the Legend of the Ten Rings’ actor claims old Hollywood was ‘white as hell’ after the filmmaker criticizes the Marvelisation of Hollywood.

AceShowbiz –Simu Liu isn’t taking advice from Quentin Tarantino about how the industry works. The Chinese-born Canadian actor has pushed back on the acclaimed filmmaker after the latter criticized the Marvelisation of Hollywood.

Tarantino voiced his complaint about the trend in Hollywood during his appearance on “2 Bears, 1 Cave” podcast. “You have all these actors who have become famous playing these characters,” he said. “But they’re not movie stars. Right? Captain America is the star. Or Thor is the star. I mean, I’m not the first person to say that. I think that’s been said a zillion times … but it’s like, you know, it’s these franchise characters that become a star.”

While he said he doesn’t hate Marvel, the 59-year-old dislikes their current ubiquity. “Look, I used to collect Marvel comics like crazy when I was a kid,” he said. “There’s an aspect that if these movies were coming out when I was in my twenties, I would totally be f**king happy and totally love them. I mean, they wouldn’t be the only movies being made. They would be those movies amongst other movies. But, you know, I’m almost 60, so yeah. No, I’m not quite as excited about them.”

The “Pulp Fiction” helmer further lamented how people and the studio seemed to be only excited about superhero movies these days. “My only axe to grind against them is they’re the only things that seem to be made,” he continued. “And they’re the only things that seem to generate any kind of excitement amongst a fan base or even for the studio making them. That’s what they’re excited about. And so it’s just the fact that they are the entire representation of this era of movies right now. There’s not really much room for anything else. That’s my problem.”

Catching wind of Tarantino’s comments, Liu took to Twitter to clap back at the filmmaker as well as Martin Scorsese, who has previously expressed his dislike at superhero films. “If the only gatekeepers to movie stardom came from Tarantino and Scorsese, I would never have had the opportunity to lead a $400 million plus movie,” the 33-year-old hunk wrote on Tuesday, November 22. “I am in awe of their filmmaking genius. They are transcendent auteurs. But they don’t get to point their nose at me or anyone.” 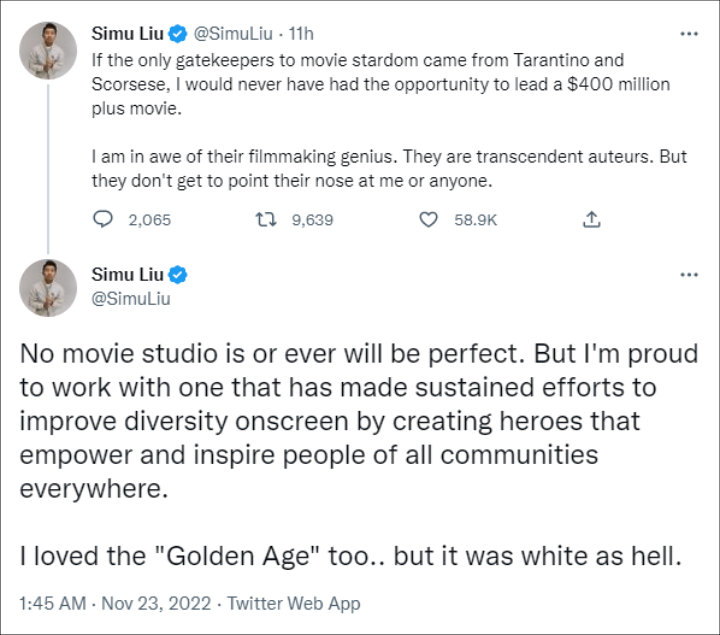 The “Shang-Chi and the Legend of the Ten Rings” star praised Marvel’s diversity while calling out old Hollywood. “No movie studio is or ever will be perfect. But I’m proud to work with one that has made sustained efforts to improve diversity onscreen by creating heroes that empower and inspire people of all communities everywhere,” he added in a separate tweet. “I loved the ‘Golden Age’ too.. but it was white as hell.”