Review: ‘Sisters on Track,’ ‘LFG’ and the Price of Star Power

Two documentaries, “Sisters on Track” and “LFG,” explore the achievements of world-class athletes and, more intriguingly, the way money is allocated within sports.

“Sisters on Track” follows Tai, Rainn and Brooke Sheppard, three preteen sisters who qualified as junior Olympians in track. The film begins in their first moments of national recognition, as they are invited on to shows like “The View” to discuss their family’s achievements. At the time, their mother was single, working minimum-wage jobs that were insufficient to cover their rent in Brooklyn. The Sheppard family was living in a homeless shelter, and their athletic success is presented as a story of resilience.

The documentarians Corinne van der Borch and Tone Grottjord-Glenne show how this flash of national attention granted them immediate opportunity, including an offer by the entertainer Tyler Perry to pay for the family’s housing for two years. Their film follows the Sheppard sisters in vérité style through this period, as their mother, Tonia, and their coach, Jean, guide them through middle school, puberty, nerves and indecision. The shared dream is for all three girls to earn college scholarships.

“Sisters on Track” shows a family working within the imperfect system that controls the financial rewards available to them. By contrast, the subjects of “LFG,” (it stands for a soccer rallying cry), are looking to upend the entire pay structure of their sport. The documentary follows the U.S. women’s soccer team as the players pursue a lawsuit against their employer, the United States Soccer Federation, for institutionalized sex discrimination.

Soccer stars like Megan Rapinoe, Christen Press and Jessica McDonald explain how the women’s team has to win more games, secure more viewers and generate more revenue to make a wage that is comparable to that of the men’s team. In talking-head interviews with the documentary’s directors, Andrea Nix Fine and Sean Fine, the teammates express their hopes that future generations of girls will be able to earn a living as athletes without having to maintain an unparalleled record within their sport. 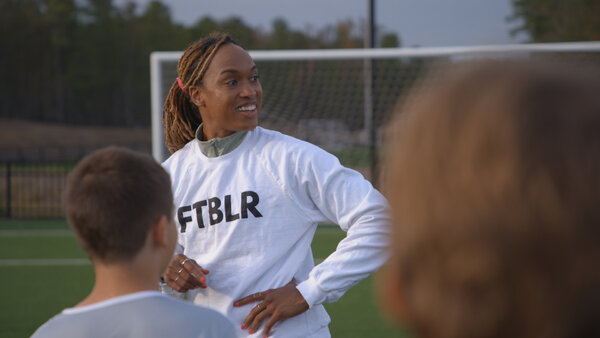 Both films are conventional in cinematic style, and they constitute the kind of feel-good entertainment that is easy to recommend. But what is timely and interesting — even thorny — about these films is their focus on the economic opportunities generated by athletic achievement. For the Sheppard family, continued track success pushes closed doors open, granting the sisters access to shelter, scholarships and private school admissions that might have otherwise been beyond their means. But as they plan ahead for college — its opportunities and its expenses — they know they have to maintain their national records if they want to translate early success into lifelong stability.

Unlike the Sheppards, who are at the start of their athletic careers, the women of the national soccer team have already proven themselves as world champions. But their astronomical achievements have not translated into astronomical earnings, suggesting that a glass ceiling looms over all women in sports. Both documentaries question how much success women must achieve to attain financial stability, and both films find that it’s not enough to be very good. To translate physical ability into financial gain, you have to be the best in the country, if not the best in the world.

Though both movies are peppered with promises that everything will work out in the long run, they also function as documents of the exploitation that elite athletes experience. Here, superhuman strength runs straight into all-too-recognizable barriers — poor working conditions, low wages, discrimination, corporate greed. The subjects of “Sisters on Track” and “LFG” confront challenges with the mentality of champions, but that doesn’t make the opposition any less daunting.