Rami Malek on playing Freddie Mercury: 'There is that fight or flight moment. I chose to fight.'

There will never be anyone quite like Freddie Mercury, the unbottled genie who strutted, bounced and roared at the front of rock group Queen from 1970 until he died of AIDS-related bronchopneumonia in 1991.

Playing him in a biopic, especially one as ill-starred as Bohemian Rhapsody, was always going to be close to impossible. "It's an extraordinary, iconic human being who is a one-off, which would be seen by any reasonable human being as a daunting task," agrees Rami Malek. "I guess essentially it begins with: 'Do I or don't I?' There is that fight or flight moment. I chose to fight." 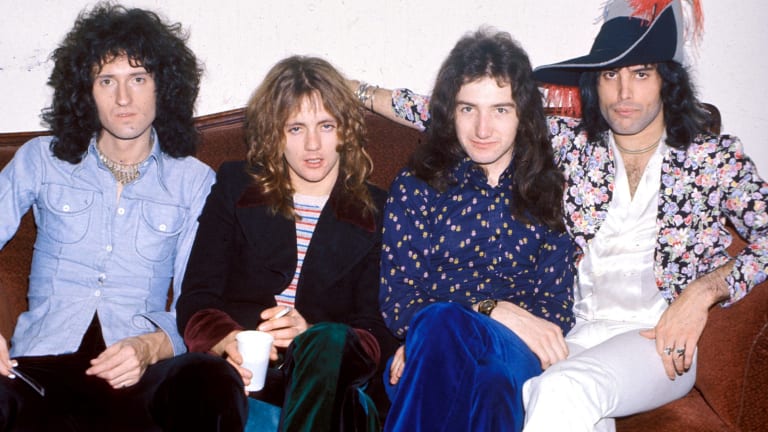 Malek was filming a remake of Papillon with Charlie Hunnam in 2016 when he heard the producers of Bohemian Rhapsody were once again looking for their Freddie. Already, the film had already been years in the coming. Back in 2010, Sacha Baron Cohen was a lock to play the role. But after he left in a storm of "artistic differences" with surviving band members Brian May and Roger Taylor, Ben Whishaw became top choice for the band and the director, Dexter Fletcher.

In 2014, Fletcher left; Whishaw said there were issues with Peter Morgan's script and it was "on the back burner" before he also faded from view. At that time, it's probably safe to say an Egyptian-American actor called Rami Malek hadn't sprung to anyone's mind. 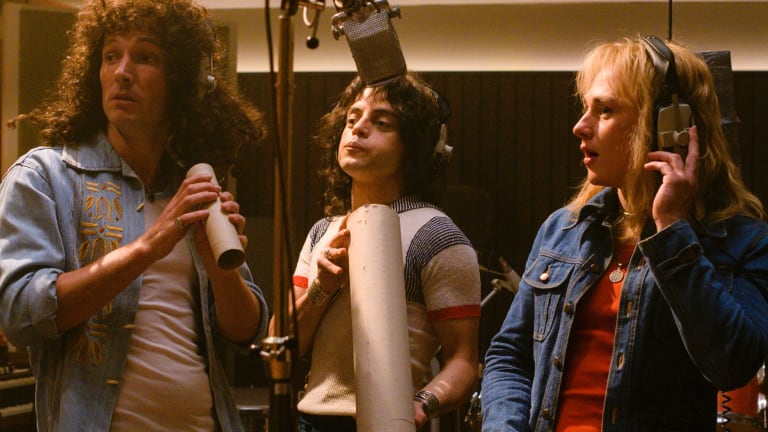 Two years later, however, Malek was nominated for numerous awards, winning several, for his work in the TV series Mr Robot. The character he played – a grimly anti-social hacker permanently shrouded in an anonymous hoodie – was hardly a calling card for the ebullient and elaborately costumed Mercury, but the real Malek resembled him in a couple of crucial ways.

Like Farrokh Bulsara, whose Parsee family came to Britain from Zanzibar, Malek came from a faraway minority culture. "That, in a sense, was my way in," he says. Also like Farrokh, who changed his name to Freddie at boarding school, he was ferociously determined. He made a tape of himself as Freddie in his full performing pomp and sent it to the producers in London. At that stage, Bohemian Rhapsody had been on the table for more than six years.

"You know what I did?" he says. "I flew myself out to London before I officially had this job or the project was green-lit and I found a way to get some money appropriated from the music department so I could just get some prep in." He made pre-recordings at Abbey Road that could be mingled with the originals; meanwhile, knowing Mercury had four extra back teeth that pushed his front teeth forward, he persuaded the make-up artist on Papillon to make him a false set that would sit over his own. "I just had to get the ball rolling by getting myself to London, flying myself out, to let them know how passionate I was."

He didn't want a choreographer. Nothing Queen did was choreographed; spontaneity was essential to the Mercury performance. Instead, he found a movement coach and studied filmed interviews and concerts to ingest his body language. "I never looked at emulating footage. I thought: 'Look, I'm never going to be Freddie Mercury' – that would be a disservice to both of us. What I thought I could do is perhaps capture his essence and his humanity." 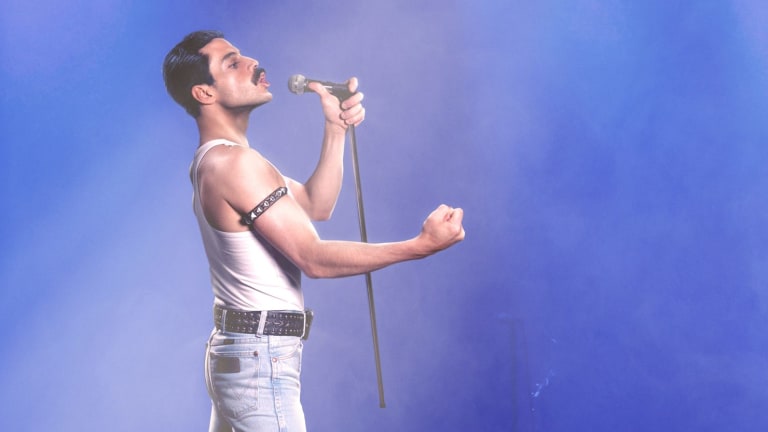 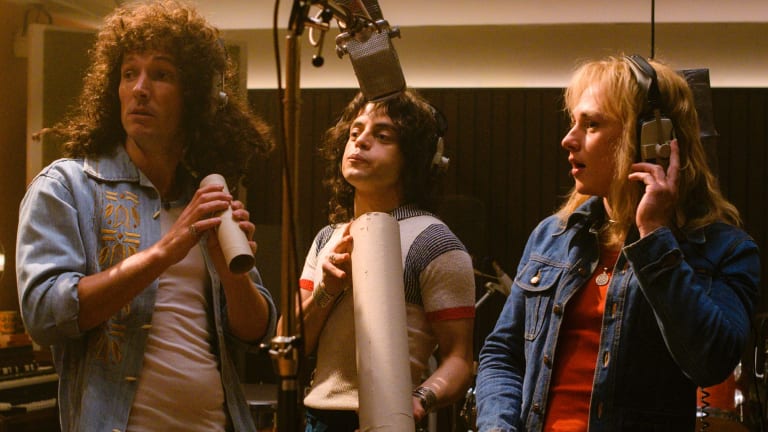 The light finally turned green for Bohemian Rhapsody in November 2016 when Bryan Singer, director of The Usual Suspects and originator and director of four of the X-Men films, came on board. Malek was confirmed in the role. There was also a completely revised script by The Theory of Everything writer Anthony McCarten and, crucially for a musical biopic, they had the songs. Killer Queen, Another One Bites the Dust, I Want to Break Free: Queen songs played all day on the set. "It's almost like having an immediate score for the film as you're doing it," remembers Malek. He says he never gets sick of them. "The music is timeless. One thing I thought before we started was that we needed to make a film that would live up to it."

It is hard to overstate Queen's rock'n'roll hugeness. Guitarist Brian May and drummer Roger Taylor were students in a band called Smile; Taylor ran a second-hand clothes stall in Kensington Market with Freddie Bulsara. They joined forces in 1970 and settled on the name Queen; bass player John Deacon joined in early 1971. Two years later, they started recording; by 1974 they hit the top 10. Then came 1975 and the smash hit that changed radio programming, pop videos and all conventional wisdom about what rock fans wanted: Bohemian Rhapsody, a six-minute song spanning several musical genres that was No. 1 in England for nine weeks. 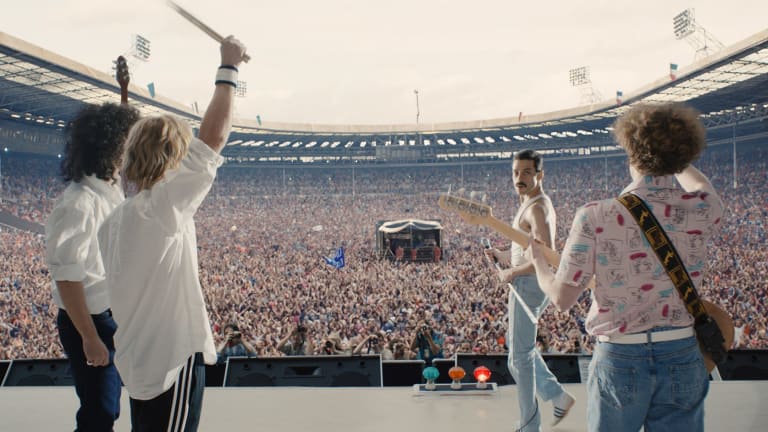 In 1976, a Queen concert in Hyde Park broke attendance records; in 1985, they stole the show at Live Aid and broke the world attendance record again at a festival in Brazil, playing to 300,000 people. Gold and platinum records plastered their walls; in 2006, an exhaustive assessment of the industry established that Queen's Greatest Hits was Britain's best-selling album of all time. One in three British households has a copy: they are, indeed, the champions. Meanwhile, Mercury continues to be idolised by contemporary artists from Lady Gaga to My Chemical Romance to Metallica. "For me, Freddie is the brightest representative of an era of rock when people were not afraid to live life to the full," Annie Lennox once said. "This would hardly ever be repeated." 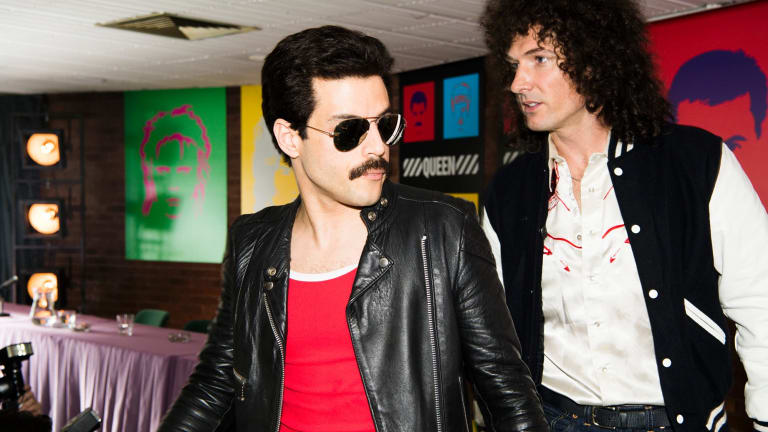 That fully lived life was apparently one of the many sticking points during Bohemian Rhapsody's tortuous progress to production. Speaking on shock jock Howard Stern's radio show, Baron Cohen said he dropped out of the film because the band wanted to sanitise Freddie Mercury to fit a PG version of the rock-star lifestyle.

"The guy was wild. I mean he was living an extreme lifestyle. There are stories of… little people with plates with cocaine on their heads walking around a party," said Baron Cohen. He also said that one member of the band thought Mercury's death should be the film's mid-point, after which "the band carries on from strength to strength", a movie that "not one person is going to see".

May's response was pithy. Baron Cohen, he said, was "an arse" who was "telling untruths". "Why would he go away and say that we didn't want to make a gritty film?" he said in an interview with the Daily Mail. "Are we the kind of people who have ever ducked from the truth? I don't think so."

It is true, however, that May and Waters have been actively involved in every aspect of production. Lucy Boynton, who plays Mary, Mercury's wife in his uncertain youth and lifelong best friend, says May was on set every day. "Which was really nice and really reassuring," she says, "because I always get slightly nervous about biopics, not wanting to become intrusive in any way. People are asking: did we explore the darker sides of Freddie's life in this film? The exciting thing is that the film doesn't shy away from anything, but it's done in a really beautiful, respectful way." 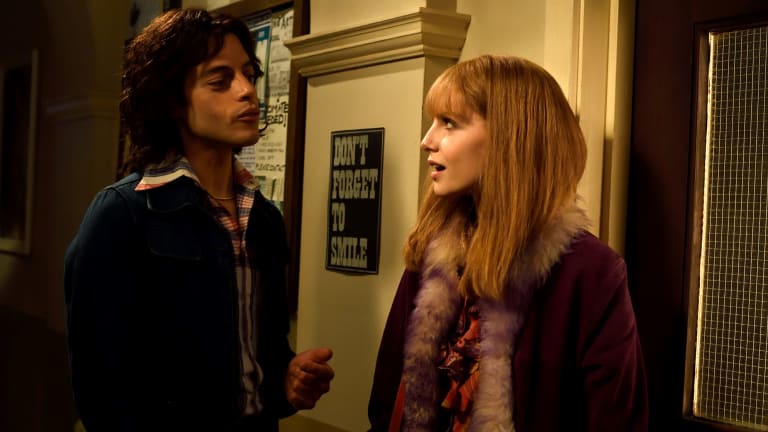 So while we see wrecked lounge rooms full of vodka bottles and there is a glimpse of a dwarf in a party scene, there is no visible cocaine and barely a whiff of gay sex. Freddie/Malek does gaze longingly at a man at a truck stop but, like a Mills and Boon romance, the story stops at the toilet door.

With director, cast and an almost family-friendly script in place, Bohemian Rhapsody's troubles were not over. Singer was an odd choice of director for a project desperately in want of stability. Since 1997, he had been dogged by accusations of serious sexual abuse; he also had a reputation for unannounced disappearances and friction with actors. Once shooting began, he soon clashed with the perfectionist Malek, throwing a plate at him during one argument. When he repeatedly failed to show up on set, Malek formally complained about his lack of professionalism.

In the first week of December last year, Singer was sacked. His replacement was Fletcher, who had left three years before. (In a strange twist, Singer is still credited as the film's director, while Fletcher is named as an executive producer). "It was difficult," says Boynton. "But I think you become closer and work harder when things get difficult, especially when you feel so protective as we did of the people whose story we were telling." Malek concentrated on channelling Mercury.

Malek has the sense the young Farrokh Bulsara was shy, even timid. "I think Freddie was very aware of being unlike the people around him," he says. "There is the sense that Queen was catapulted to fame but, learning about him, you see the drive he had to get to where he was. He taught himself to play the piano. He didn't have any vocal instruction, yet he could sing those four octaves. He is constantly pushing himself to defy any expectation of who he was by saying, 'Look, I don't have to be Farrokh Bulsara, I can be what I want to be.' It became easier when he found that that bravado was not just a facade, but something he had in him." 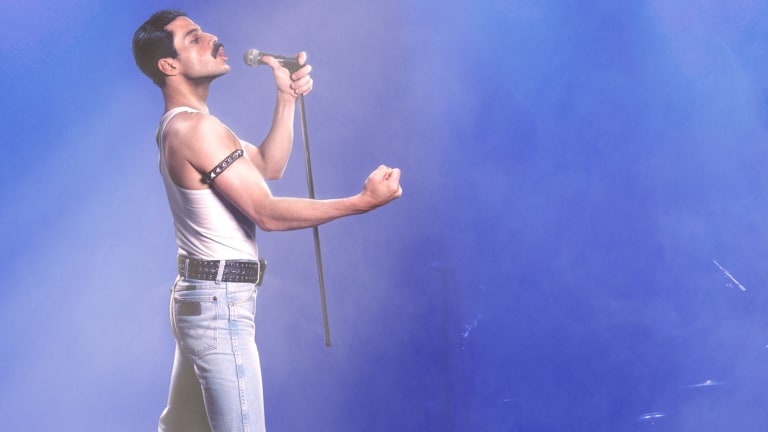 You may struggle to find much of that defiant sense of mission in Bohemian Rhapsody's narrative, but it is certainly there in Malek's exact re-creation of Mercury's show-stopping turn at Live Aid in 1985, which is both the climax and grand finale of the film. For this one scene, says Malek, "we wanted to get as close to the on-the-day performance as possible". Freddie knew then that he was HIV-positive; every song is a triumphant blow-back against death.

When he was on stage, he said once, he felt he was "exactly the person I was always meant to be, singing for the people right at the back of the arena, the ones who don't fit in – the outcasts, the shy, the pretty-damn-sure-they-don't-matter. Showing them anyone can fly above the critics and the bullies. If I can do this… they can do anything they want to." Not much of it might have made sense, yet it made perfect sense. Scaramouch, Scaramouch, will you do the fandango? That's a hard call to resist.