Rachael Beck on Scott Morrison: 'He's actually not made fun of enough'

After a day spent watching the parliamentary rabble-rousing of question time in Canberra, actor Rachael Beck suspects some politicians might have missed their calling on stage.

"Oh my goodness, I just think they are all theatrical," she says. "I feel as though I've had an hour-and-a-half in the theatre really." 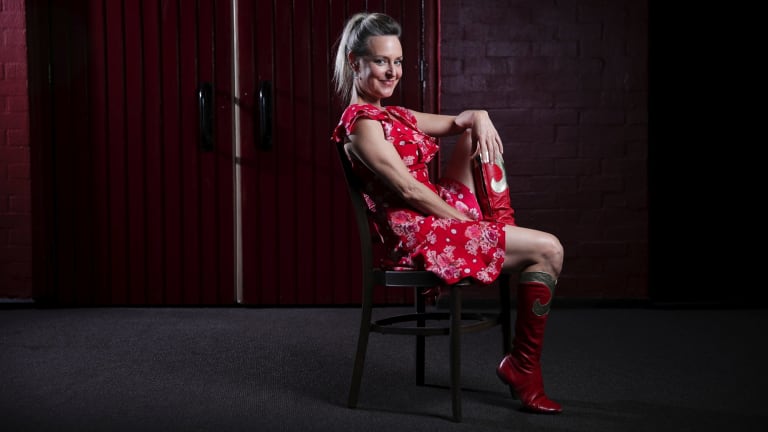 Rachel Beck is digging deep into her arsenal of accents and channelling her experience in musicals to lampoon political figures in The Wharf Revue.Credit:Alex Ellinghausen / Fairfax Media

So a few could break into show business? "Totally. It's all about persuasion. It's all about delivery. And it's about speaking from the heart. That is the point of acting as well. We've got to pretend that everything we say is coming from truth and it has to be our truth."

A familiar face from her stints in musical theatre as well as her time on sitcom Hey Dad..!, Beck was invited to Parliament House during the Canberra run of dates for The Wharf Revue 2018: Deja Revue. It is her first time in the show, starring opposite creators Jonathan Biggins and Drew Forsythe, in what has become an annual tradition for lovers of political satire since it began in 2000.

"Jonathan and Drew are such formidable writers and extremely respected in our industry, so it's amazing to work with such geniuses," she says. "They really do have a wonderful following that they've built up over the years."

For the production, Beck is digging deep into her arsenal of accents and channelling her experience in musicals to lampoon political figures, both local and international. She appears as a whiteboard-toting Michaelia Cash, Melania Trump doing her best Marlene Dietrich, a tap-dancing Gladys Berejiklian singing about infrastructure and Malcolm Turnbull as a pantomime Cinderella.

But perhaps her most dramatic transformation is as alleged Donald Trump paramour Stormy Daniels. "I've got the big pair of fake plastic boobs that have been flown over from New York – drag queen boobs – that I wear. It's probably the one and only time I'll have boobs bigger than A-cup, so that's quite a delight for me," she says, joking.

Beck admits that while she follows what's happening politically in regards to the arts, prior to being cast in The Wharf Revue she would have been more likely to click on online gossip about Prince Harry and Meghan than be trawling the #auspol hashtag on Twitter.

"It's been absolutely wonderful to learn about. It's really opened my eyes," says Beck of being a political junkie in training. "[The Wharf Revue] is just so smart and funny and it makes you think. There's nothing else on the stage in Australian theatre like this."

She also recently took the opportunity to invite a special guest along to watch the show when she unexpectedly bumped into Prime Minister Scott Morrison at Bronte Beach in September. "He was just getting some photos taken. I walked up to him, of course being the brash actor, and straight away said I'm doing The Wharf Revue and playing Malcolm Turnbull. He was a bit taken aback."

While Beck's not holding her breath that Morrison will be in attendance at Revue's opening night, she thinks this would be the best year for him to pop along since the timing of the leadership spill meant he got off comparatively lightly.

"He gets a really good guernsey, he's not made fun of much at all in this show. We had to quickly write a few things in because it was happening when we were rehearsing." She adds with a laugh: "I think he should come, because he's actually not made fun of enough in my personal political opinion."

The Wharf Revue 2018: Deja Revue is at Roslyn Packer Theatre from November 13 to December 15.