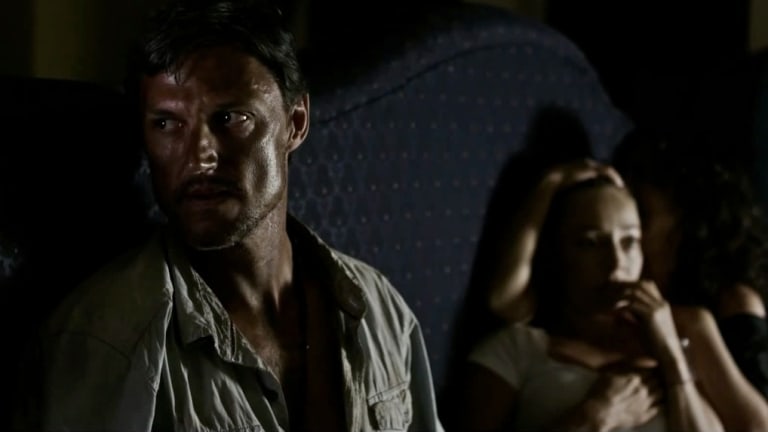 Joseph Taylor as Sean in One Less God.

The subject is the Mumbai terrorist attacks of November 2008. The style is disaster film: we focus on a set of foreigners holed up in one of the hotels attacked by multiple Islamist killers. The real group that trained them, Lashkar-e-Taiba, is not mentioned, only that they are from Pakistan.

The foreigners include a Jewish Australian rock star (Nathan Kaye) and his hysterical wife (Nicole Fanti); an Irishman with a hero complex (Joseph Mahler Taylor) who must save a wounded old woman (Jan Langford Penny); an Indo-French journalist (Martelle Hammer) and a born-again American (Joshua Taylor).

Soon they are joined by two squabbling Turkish teenagers, a 17-year-old girl (Reilly O'Byrne Inglis) and her older brother (Igor Kreyman), who's sick of the way Muslims are portrayed in the media, even though he's about to be terrorised by two of them with AK-47s.

For about 30 minutes, we never see the faces of the attackers – just weapons and feet. We hear them shooting and bombing, we know they are talking to their handler in Pakistan (only shown in soft-focus), who encourages them to commit more atrocities.

Then we meet the two who have been sent to kill the hotel guests, especially the Jews. From then on, the film can't get enough of Yaaseen (Kabir Singh) and Ahmad (Kieran Kumar), both of whom seem spaced out. Abdul snorts white powder to keep on killing. Yaaseen's motivations or doubts are less clear.

If you want tension and sentiment, the movie has plenty. An old Indian man (Sukhraj Deepak) is on a top floor trying to convince his granddaughter (Mihika Rao) the bombs are just fireworks, Roberto Benigni-style. If you want sickening violence, there is plenty of that too, with hotel staff and guests bleeding in every hallway.

If you want nuance and factually based characters, this might not be that movie. So far as I can tell, none of the main hotel characters is real. They are either composites or invented, to serve the director's quasi-religious agenda, delivered in a cloying voiceover lecture by Sean the brave, both fore and aft. This amounts to the sentiment that we should all love each other and stop killing in the name of religion.

This is one of two Australian-developed movies "inspired by" these events. I haven't seen the other, but One Less God is plodding and generic. A terrorist attack does not adapt well to the format of a disaster movie. Real people, including some Australians, died in these attacks. Filmmakers have a duty of care to that truth. Lliam​ Worthington, in his debut feature, gives us a ship of fools squabbling in their hotel room. Even 10 years later, it's too soon for that kind of licence.