Netflix's Outlaw King should be grateful for Chris Pine's penis

Netflix’s historical biopic Outlaw King is causing quite a stir ahead of its release, but not necessarily for the reason it would like.

Following its world premiere at Toronto International Film Festival, it seemed that everyone’s attention was drawn to one particular moment when Chris Pine’s Robert the Bruce, the King of Scots, whipped out something other than his sword in a full-frontal scene.

Pine initially said that the reaction was “pretty cool” and later called out “double standards” over the reaction, while director David Mackenzie believed that the whole fuss around the scene in question was “ridiculous”.

But we’re here to tell you that whether Outlaw King likes it or not, it really should be grateful for Pine’s penis.

Outlaw King tells the true story of Robert the Bruce (Pine) who in the 14th Century led a rebellion against Edward I of England (Stephen Dillane) and seized the Scottish crown back for the Scots.

Essentially it’s a spiritual sequel to Braveheart, complete with its own stirring climactic speech and brutal battle sequences caked in mud and blood. If you’re not looking for a history lesson (which you definitely don’t get here), there’s plenty to enjoy in Outlaw King, but it never quite escapes a ‘seen-it-all-before’ feeling.

This isn’t helped by the fact that after its premiere, when the movie was criticised for its pacing, Mackenzie cut 20 minutes out of the movie, largely from its first and third acts. The result means that you certainly can’t accuse Outlaw King of dragging, but it does leave it feeling like a succession of battle scenes with little depth.

The cast do their best, especially Pine (with a passable Scottish accent) and Florence Pugh as Robert’s wife Elizabeth de Burgh, yet you never really feel a connection to the characters. 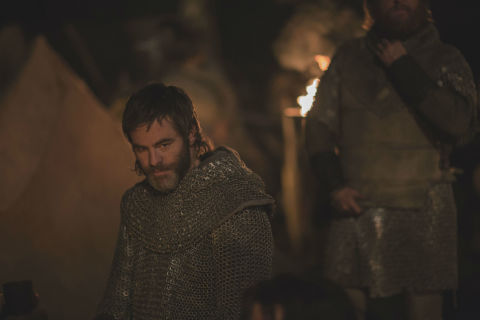 Fortunately for Outlaw King, though, one thing that Mackenzie didn’t cut out of the movie – despite his dismay at the reaction – was the scene when Pine goes fully naked.

While you might also be wondering what all the fuss is about once you see it (the scene, not the penis), there’s no denying that it’s generated an interest (in the movie, not the penis) that otherwise wouldn’t have been there. As Netflix has ramped up its original movie content, there are plenty of titles that come and go without making much of an impact. Even if they’re good (like Apostle, for instance), there’s soon another movie that everyone needs to talk about.

So the very fact that Outlaw King has a moment that people will likely be trying to find is a positive for the movie. Whether that means that people will watch the whole movie or just skip through it, at least they’ll be clicking ‘play’ on its release.

And once they do come to the big reveal, they’ll probably understand what Pine was talking about when it comes to “double standards”. 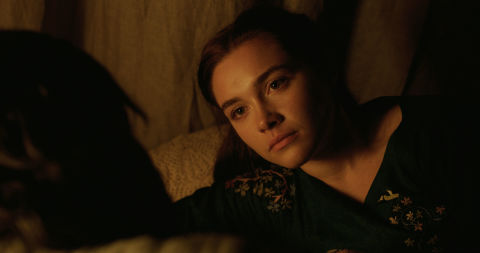 The scene in question sees Robert take a brisk bath in a Scottish loch, so of course he’s not wearing any clothes and even when he emerges from the water, it’s filmed in a wide shot and over before it starts, really. Anyone skipping through the movie might even struggle to pinpoint the exact moment – unlike an earlier sex scene where Pine’s co-star is topless.

During this sequence, the camera lingers more on Pugh than it ever does later on Pine’s orb and sceptre. “Either people think they can’t comment or everyone expects women to get naked. Either way, it’s double standards,” Pine noted of the lack of reaction to Pugh’s nudity, and it’s hard to argue with that.

But why everyone gets so flustered over an on-screen penis in 2018 is a bigger debate for another day – and it’s not Outlaw King‘s fault, even if it will inadvertently benefit from the reaction, as it’s otherwise a well-made but middle-of-the-road historical biopic.

Oh and where is the scene, you ask? We wouldn’t dream of letting on. If you want Captain Kirk’s crown jewels, you’ll have to search for them.

Outlaw King is in select cinemas and launching globally on Netflix on November 9.