Netflix can’t match Hallmark’s prodigious output when it comes to holiday movies, but then it doesn’t seem to try. Instead, the streaming platform offers a curated slate boasting, at least in theory, bigger budgets, splashier ambitions, and more diverse casts and stories.

But while Netflix showed some Christmas game the past two years, it engaged the autopilot for its 2020 batch. So much so that the low-budget indie pickup “A New York Christmas Wedding” — a flawed but endearingly scrappy lesbian rom-com — is a more compelling watch that most of the Netflix originals.

But ho-ho-ho we must, so below are the 2020 Netflix original holiday movies available at the time of writing, ranked from best to worst.

‘Jingle Jangle’ | Anatomy of a Scene

“Hey, this is David E. Talbert, the writer and director of Jingle Jangle: A Christmas Journey.” “You might want to open this one.” “In Jingle Jangle, Forest Whitaker as he’s introduced here as Jeronicus Jangle, he’s lost all his magic and his mojo. And so we see him 30 years removed from being this vibrant, joyful man and now he’s a pawnbroker. And there’s only one person in all of Cobbleton that believes he still has it. And that is Ms. Johnston, who is the heartbeat of this film for me. I love the light that she has in her and wants to shine it on him.” “The actress, a brilliant actress, who plays Ms. Johnston is Lisa Davina Phillip. She’s a British stage actress. And she is killing it.” [MUSIC – ‘MILES AND MILES’] ”(SINGING) Just because you fell down, don’t believe you can’t pick yourself up again.” “Well, the song is called ‘Miles and Miles’ and the lyric is, ‘The world needs to see you smile because your smile goes for miles and miles.’ And when we did the music of it, I wanted it to be reminiscent of the Minneapolis sound and Prince. So it was heavy with that guitar. But Ms. Johnston is a beautiful, full-figured woman, so we wanted the beat to be like her hips were moving.” “You know people can see you.” “Bom bom bom bom.” ”(SINGING) — in the middle. Like pancakes on the griddle. I’ve got got got got try to—” “Me, I grew up watching Tramaine Hawkins who was one of the great gospel singers. And when she would sing, she would rear her back, like all the way back, like you thought she was going to fall. So I told Lisa, in honor of that kind of belting in the black church in the States, I wanted her to really lean back. And so she just brought the thing to life.” ”(SINGING) Shine for miles and miles.” “Are you drunk?” “And then in the midst of the song, we had these wonderful backgrounds that Phil Lawrence put in this song. And when I heard these backgrounds, I’m like well no, these people got to be in the film. So they weren’t even really supposed to be in there, but I wanted to be like the Pips, like Gladys Knight and the Pips. So that’s what we were calling them, the Pips. So we wanted to have these three black men dressed to the nines doing choreographed dances. And I thought that would be kind of a shoutout to the ‘70s soul movement of when grown black men were doing choreographed dancing.” “Well, I hired Ashley Wallen who did the choreography for the Greatest Showman. And then when it was time for this scene, we went on YouTube and we pulled up Temptations, and he just incorporated that with this cat-and-mouse thing. And they end up taking over the song. It’s all about them. Once they pop up there, you’re like O.K., I didn’t expect that. But I love it.” ”(SINGING) You’ll feel better when you smile. Smile.” 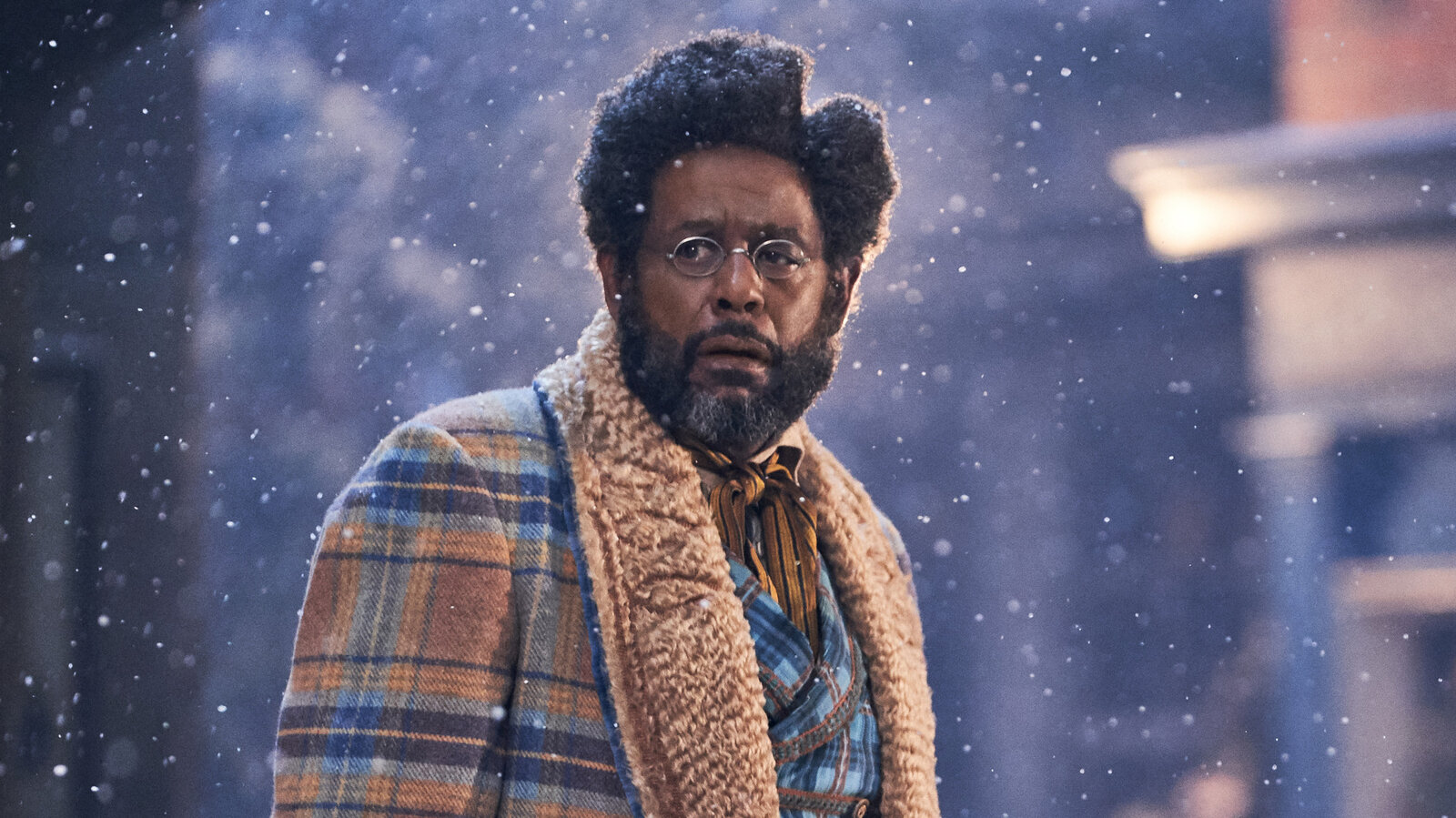 Netflix’s prestige entry in the holiday sweepstakes, “Jingle Jangle: A Christmas Journey” is not great, but it does feature a surprisingly prickly performance by Forest Whitaker, as well as musical numbers that are fairly decent, if often derivative (Madalen Mills’s anthemic “Square Root of Possible” sounds like an answer song to “Defying Gravity” from “Wicked”).

Whitaker’s Jeronicus is a gifted toymaker and inventor who sank into bitterness and rancor after his apprentice (Keegan-Michael Key) stole his blueprints and ruined his business. Since this is a holiday movie, there is zero suspense about the ending: it’s no spoiler to say that Jeronicus’s plucky, precocious granddaughter (Mills) will help restore justice along with Grandpa’s faith in family, humanity and the power of song and dance. The treacle can get thick — the movie glances in the direction of “Charlie and the Chocolate Factory” but lacks Roald Dahl’s wicked humor — but overall “Jingle Jangle” goes down fairly easily. 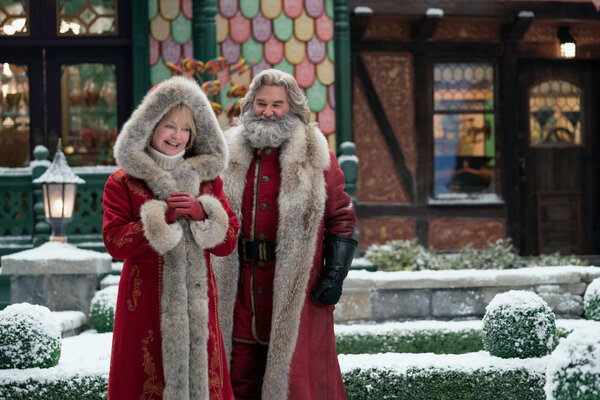 Everything that went right for “The Christmas Chronicles” a couple of years ago began and ended with the casting of Kurt Russell as a funky Santa Claus with Kenny Rogers grooming and a sexy red shearling coat. Goldie Hawn turned up for a cameo as Mrs. Claus, and the good news is that her role has been beefed up in this year’s sequel. The bad news is that “Part Two” is jacked up on holiday juice and everything has been beefed up — more special effects, more elves, more plot. With Chris Columbus (of “Home Alone” fame) now at the helm, “The Christmas Chronicles 2” pairs the original’s plucky, precocious heroine Kate (Darby Camp) with Jack (Jahzir Bruno), the scaredy-cat son of Kate’s mom’s new boyfriend, and sends them up to the North Pole. The kids, however, are merely pawns in a nasty game played by Belsnickel (Julian Dennison), a disgruntled former employee of the Clauses, who has turned the elves into destructive gremlins. Never mind that the movie can’t even be consistent about Santa’s powers: Once again it all boils down to Russell, and once again he delivers.

“Operation Christmas Drop” earns bonus points simply by taking us away from the wintry Midwest that seems to be the default set for every other holiday flick. Here we are transported to Guam, where briskly efficient congressional aide Erica Miller (Kat Graham, of “The Vampire Diaries”) has been dispatched to investigate and possibly defund the local Air Force base. Obviously, this puts the base’s Christmas tradition of parachuting supplies to thousands of islanders at risk. Erica’s local guide is the hunky Capt. Andrew Jantz (Alexander Ludwig), a freakishly nice guy who also happens to be single. The two meet semi-hostile but it doesn’t take long before the captain’s own Operation Charm succeeds and Erica lets down her hair, both literally and figuratively. As far as eye candy and holiday spirit go, “Operation Christmas Drop” does the job, which is enough to put it on the podium in this annus horribilis of Netflix Christmas movies.

Sloane (Emma Roberts) and Jackson (Luke Bracey, Australia’s latest export) are singles and adverse to complications. They decide to be each other’s date, no strings attached, for the holidays — all of them. Accordingly, “Holidate” takes us through St. Patrick’s Day, Easter, Cinco de Mayo and so on. A tip to the creative team: there is this thing called a music montage, you see, and it would have allowed you to string some of those celebrations together in a five-minute sequence. The movie starts promisingly, cutting the usual saccharine with a sour-candy tang. But desperation eventually sets in — diarrhea gags are way past their expiration date by now — and “Holidate” limps to its predictable denouement. Too bad, because it could have been among the best seasonal rom-coms.

Two years ago, Vanessa Hudgens made her entry into the Netflix holiday landscape with “The Princess Switch,” a sugar-frosted fantasy that combined two surefire crowd-pleasers: royalty and dessert. She actually embodied both by portraying Margaret, Duchess of Montenaro, and Stacy, Baking Queen of Chicago. In the sequel, Stacy flies to Netflixworld Europe to attend Margaret’s coronation. Hudgens goes for a three-peat by also playing Margaret’s grifting cousin Fiona, and while she seems to have a bit more fun with Fiona than with her other two roles, one wishes she had gone all the way and channeled her performance from the decadent “Spring Breakers.” Paradoxically the movie doesn’t bother to make sense while holding on to the guardrails, and so it never fully exploits the situation’s comic potential. Maybe next time? Actually, forget I said that.

6. ‘Midnight at the Magnolia’

The cast of “Midnight at the Magnolia” may be the least diverse on this list, but the movie actually feels not so much white as beige, or whatever Pantone calls the color of blandness. Maggie (Natalie Hall) is dating a guy prone to wearing sweater vests, so you know that relationship is doomed — especially since astute viewers will have spotted the one true love standing right next to her: longtime best friend and confidante Jack (Evan Williams). After they are both dumped, Jack and Maggie pretend to be in love with each other for the sake of the radio show they co-host. Movies burdened with insipid leads often make up for them with amusing sidekicks; “Midnight at the Magnolia” does not even try. Jack may refer to their “crazy families,” but the characters are all so aggressively innocuous, they make the models in an L.L. Bean catalog look like sociopathic hoodlums.

7. ‘Dolly Parton’s Christmas on the Square’

Christine Baranski livens up, as is her wont, mediocre lines in this Dolly Parton musical, with Jenifer Lewis providing a barnstorming assist. On its own, this casting would have been enough to lift “Christmas on the Square” a few spots in this ranking. But the movie’s overbearing sanctimoniousness gets in the way, fogging up any camp goggles you might attempt to watch it with. We are meant to root against Baranski, who is handing out eviction notices so that an idyllic — if you love the 1950s at their most oppressive — town square can be replaced with a mall. But siding with this fantasy heartland’s good citizens against “the Wicked Witch of the Middle” is not easy when they gleefully sing “roast her, toast her, choke her” in church, as Pastor Christian (Josh Segarra) looks as if he’s about to get the pitchforks out of storage.