My Mental Health: How horror movies helped me process grief

As part of World Mental Health Day, Digital Spy staff are sharing their stories of when TV shows and movies spoke to them about their own experiences with mental health problems.

Horror movies get a bit of a bad rap, and horror fans are often painted as a blood-thirsty bunch of sadists who enjoy watching other people’s pain. I’ll take that, but that’s not the only appeal of horror.

In the summer of 2009 my father died. It was very sudden, he wasn’t sick and I found it hard to deal with. I’ve been a film journalist for more than a decade, am somewhat obsessive about my job and needed the distraction, so I decided to return to work just two days after it happened (I took some more time off around the funeral). Unsurprisingly, watching movies is a massive part of my work and suddenly I found myself struggling.

Bereavement had left me on one hand bulletproof (I really did not sweat the small stuff) but also completely raw. It was this rawness that began to be a problem. Movies are emotional: they’re supposed to make you feel things, but now, as a prickling ball of sensitivity, it was all a bit too much with certain films.

In hindsight I know Where the Wild Things Are isn’t actually a five-star movie. But it started me crying from five minutes in (when young Max sees an inscription on a globe from his estranged – possibly dead – father) right through to the end. My colleagues were sweet enough not to nix my rave review for fear of more tears.

And I know The Descendants is meant to be a comedy, but the scene where George Clooney turns off his wife’s life-support machine absolutely destroyed me at the London Film Festival’s red-carpet gala at a screening with the stars in attendance. Posh dress and panda eyes don’t make for a good look. 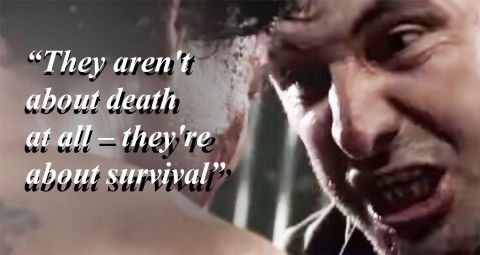 Horror films became my safe space. I’ve been a fan for years but until the summer of 2009 I hadn’t quite realised how much many horror movies aren’t about death at all – they’re about survival. They’re about beating death, about the pure human instinct to carry on in the face of the most terrible circumstances. They’re about conquering demons and relentlessly gripping onto life and hope.

There’s also a fierce, vital energy to horror films that right then, to me, equated to strength.

There’s an Australian movie called The Horseman which I remember massively identifying with at the time. It’s a furious rape-revenge movie (bear with me) about a man who discovers his daughter has been drugged, assaulted, and left for dead by a bunch of pornographers as part of a shoot.

The dad goes on a quiet rampage, destroying these men and their associates one by one in the most brutal ways. On his journey he meets a young pregnant woman who needs his help and becomes his travelling companion – he tells her he works in pest control and is on a business trip.

So what you get is a movie that alternates between violent rage and retribution driven by grief, and quiet solace and tenderness between a middle aged man and a girl who reminds him of his daughter.

It spoke to me. Of course I wasn’t carrying any sense of vengeance but anger is part of grief. As is a feeling of helplessness – so the need to do something, to take action, feels very important. And the movie offered gentle redemption through a closeness with another person, and a kind of post-grief rebirth – all on the money. It’s an exploitation movie, sure, but it was soothing.

That year a month after my Dad died I attended annual horror mecca Frightfest. 2009 was the year of Triangle, Troll 2 documentary Best Worst Movie, The Girl With The Dragon Tattoo and The Human Centipede.

It was like therapy (well not quite – the actual therapy I did later was obviously a very important part of getting through it too). Everyone is different and everyone grieves differently – but at a tough time in my life extreme ultra-violence was totally there for me.

Also in our My Mental Health series:

Panic attacks – and an obscure Guy Pearce period horror from 1999

What The Sopranos taught me about mental health

We would encourage anyone who identifies with the topics raised in this article to reach out. Organisations who can offer support include Samaritans on 116 123 (www.samaritans.org) or Mind on 0300 123 3393 (www.mind.org.uk). Readers in the US are encouraged to visit mentalhealth.gov or the American Foundation for Suicide Prevention.