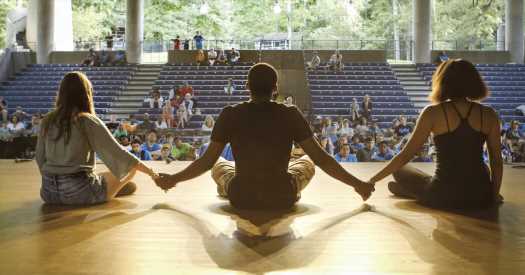 The goal of “My Beautiful Stutter” is to raise awareness about people who stutter and to correct misimpressions and attitudes that surround the speech disorder. Directed by Ryan Gielen, the film is pitched more as a public-service announcement than as a documentary with cinematic ambitions. Reviewing it in artistic terms seems beside the point.

Primarily, the movie is a showcase for Camp SAY, a summer camp for school-age children who stutter. The acronym stands for The Stuttering Association for the Young. The association’s founder, Taro Alexander, who stutters himself, tells campers he didn’t meet anyone else who stuttered until he was 26. The camp shows children that there are others like them and builds their confidence.

Adhering to an overworked format, the movie follows several campers. We meet Julianna, who turned to singing as an outlet, and Emily and Sarah, friends who each in their way once shied away from talking because they found it exhausting. Malcolm, from New Orleans, who witnessed a violent incident as a child, forges a friendship with the older Will, a star English student who writes a college essay about the mismatch between the language in his mind and his ability to vocalize.

It may seem odd that there is no mention of Joe Biden, who dealt with a stutter in childhood, but the movie is not current. It was filmed during the camp’s 2015 session, when the summer program was in North Carolina (it is now in Pennsylvania), and the first screenings took place in 2019. The lessons — for stutterers and non-stutterers — still hold.