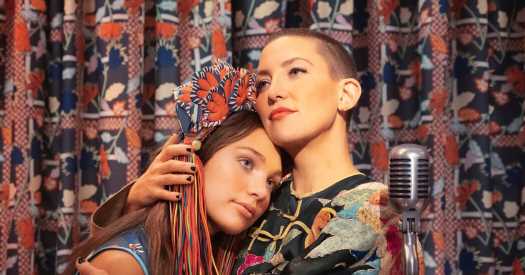 The cringeworthy drama “Music” introduces its central character in a song and dance sequence so gasp-inducingly crass, the scene almost demands that the movie be shown in theaters. At least then, audiences would be able to exercise the right to walk out.

The film is directed by the pop singer and songwriter Sia, and it stars her frequent collaborator, Maddie Ziegler, as an autistic teenager named Music. The film begins with Ziegler performing an interpretive dance set to a new song by Sia about bodies failing and spirits being set free.

Ziegler’s dancing is as expressive as ever, but she has been directed to pantomime an exaggerated apery of disability. She gapes, her eyes wide and unfocused, as the choreography leads her through a cruel approximation of twitches and whoops. Neither Ziegler nor Sia are autistic, and their collaboration on this film reduces disability to mannerisms that look indistinguishable from mockery.

The film spins away from this shocking opening to introduce its characters in a more realistic world. There, Music lives in New York with her loving grandmother, Millie (Mary Kay Place). When Millie suddenly dies, she leaves the teenager in the care of Music’s half sister, Zu (Kate Hudson, nominated for a Golden Globe in the role).

Zu is ill-equipped for the responsibility of watching Music, but the attention of a handsome neighbor, Ebo (Leslie Odom Jr.), provides her with enough incentive to stick around. As Zu and Ebo begin to imagine what a family with Music could look like, they sing Sia songs composed specifically for the film in their fantasies.

This is a bizarre movie, one that parades confused ideas about care, fantasy and disability with a pride that reads as vanity. It is audacious, in the sense that making it certainly took some audacity.