Love Actually fans were served well last year when we got a one-off special called Red Nose Day Actually, reuniting some of our favourite characters 14 years after the original movie.

However, there is still that niggling feeling among some that we deserve a full-length sequel to the cheesy Christmas classic.

So who better to ask about the matter than star Martine McCutcheon, who famously played Hugh Grant’s love interest Natalie in the original movie? 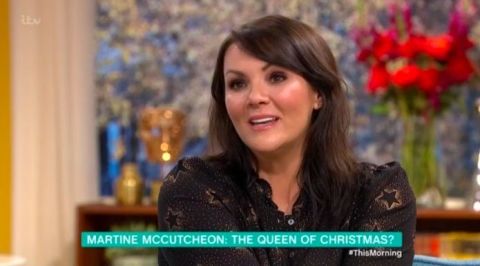 Well the singer and actress was pressed on it during today’s (October 26) This Morning, saying: “Of course as a jobbing actress I would love to do it, I’d love to be with that amazing cast again.

“But I think he kind of did it with the Comic Relief and the film together, that was Richard Curtis’s dream come true I think. I can’t speak for him, but I think.”

Ugh, well we can still hope, we suppose.

Former EastEnders star Martine was also surprised to learn that Rylan appeared in the movie when he was a kid (say what?!), revealing he was “an extra in the school”.

“Catch a falling star and put it in your pocket, little ginger boy,” he confessed to a shocked Martine. “Can I just say you were so lovely as well when I met you back then.”

This Morning airs weekdays on ITV at 10.30am.