John Wick 3: Cast, release date, plot and everything you need to know

When we last saw John Wick, he wasn’t in the best shape as he’d just had a global contract hit put out on him at the end of John Wick: Chapter 2.

So it’s fair to say that the third movie in the hit action franchise, led by Keanu Reeves, won’t be a sedate stroll in the park. Even the full title, John Wick 3: Parabellum, hints at the carnage in store as Reeves explained earlier this year.

“[It means] prepare for war. It’s part of that famous sentence, ‘Si vis pacem, para bellum’ which translates as, ‘If you want peace, prepare for war’,” he outlined. After all, Wick did say he’d “kill them all” at the end of Chapter 2.

It’s also the name of the world’s most popular type of bullet.

So what else can we expect from the third John Wick outing? Here’s everything you need to know so far.

There’s definitely one thing that’s stuck out the most during the filming of the threequel and that’s Wick riding a horse through New York as he’s pursued by baddies out for the bounty on his head. 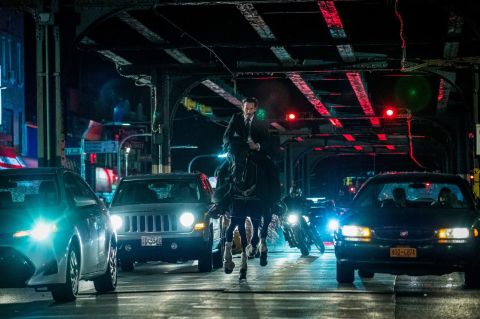 Why isn’t he in a car or on a motorbike? Well, we’ll probably have to wait until the movie comes out to find out, but returning director Chad Stahelski (who also co-directed the first movie) told Empire that a horse won’t be the only animal in town.

According to Stahelski, the movie will feature “horses, dogs, cats, a raven, a bunch of pigeons” and not to mention “shotguns and ninjas”. Just another day at the office for Wick then.

Keanu Reeves won’t be alone in the threequel as Laurence Fishburne, Ian McShane and Lance Reddick are all back as The Bowery King, Continental Hotel owner Winston and Continental concierge Charon, respectively.

But while The Bowery King and Winston were on Wick’s side in the previous movies, it’s been hinted that the two will now be against Wick. When a new image of the duo was released, it was captioned: “Old friends. New enemies.” 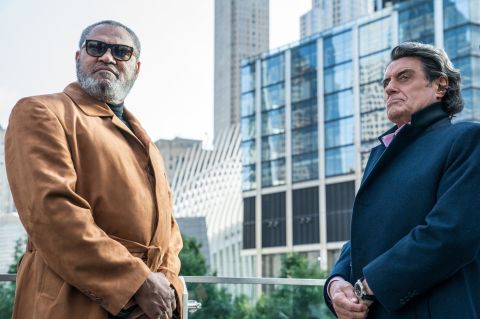 There will be no shortage of new assassins after Wick either, as it’s been confirmed that Agents of SHIELD‘s Mark Dacascos will play Zero and Brooklyn Nine-Nine‘s Jason Mantzoukas will appear as the Tick Tock Man.

Most excitingly, Anjelica Huston has joined the cast as The Director, who will presumably work closely with The Adjudicator, played by Orange Is the New Black‘s Asia Kate Dillon. The two are part of the High Table, who aren’t too pleased that Wick killed one of their own in Chapter 2.

Maybe Wick can get some help though from Halle Berry’s assassin Sofia, because Reeves has teased that the two have “a past”, but can Sofia be trusted with the contract out on Wick? 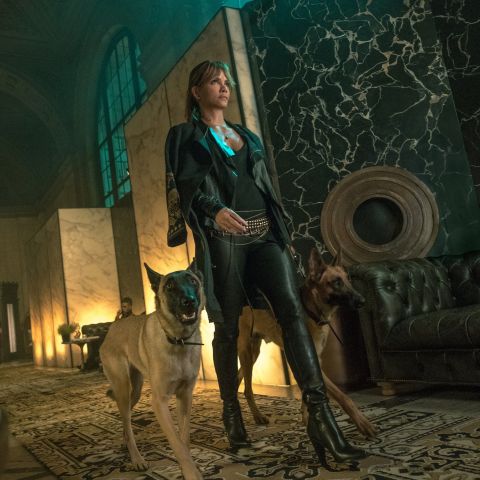 The Raid duo Yayan Ruhian and Cecep Arif Rahman will also play professional killers who face off against Wick and so will martial arts star Tiger Hu Chen.

Basically, Wick is a bit screwed.

It was rumoured that Common and Ruby Rose would reprise their roles as Cassian and Ares, respectively, but that hasn’t been confirmed. In the case of Rose’s character, it seems unlikely since she was killed off in Chapter 2.

John Wick 3 release date: When can we expect it?

Lionsgate confirmed earlier this summer that John Wick 3: Parabellum will be released in cinemas on May 17, 2019.

Filming has been underway since May 2018, so everything seems on track for the threequel to hit that early summer release date.

John Wick 3 plot: What’s it all about?

For once, we don’t need to scour for clues from the director or the writer as Lionsgate have released a fairly detailed synopsis for the threequel.

“John Wick is on the run for two reasons… he’s being hunted for a global $14 million open contract on his life, and for breaking a central rule: taking a life on Continental Hotel grounds. The victim was a member of the High Table who ordered the open contract,” it reads.

“John should have already been executed, except the Continental’s manager, Winston, has given him a one-hour grace period before he’s ‘Excommunicado’ – membership revoked, banned from all services and cut off from other members. John uses the service industry to stay alive as he fights and kills his way out of New York City.” 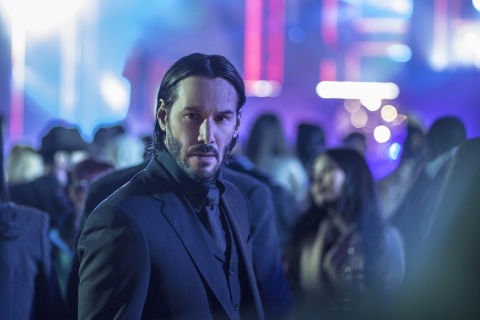 It was rumoured that the third movie would go global like the sequel, but Stahelski wants the threequel to be more intimate, giving us a greater insight into Wick and the wider world of the Continental.

“We want not so much to go bigger on the third one but [instead] to show you more of the intricacies of the world,” he told Collider.

“I feel like there’s all these different subtleties that I skipped over in number two that I’d like to go back to in number three and show you the inner workings of different parts of New York. Rather than massive set pieces, I’d like to show you cooler, more intricate ones.”

We’re not ruling out a connection to the upcoming TV show about the Continental Hotel, called The Continental, or to the planned female-led spin-off movie.

Nothing as of yet, so for now, you’ll just have to enjoy this montage of Halle Berry having fun on set.