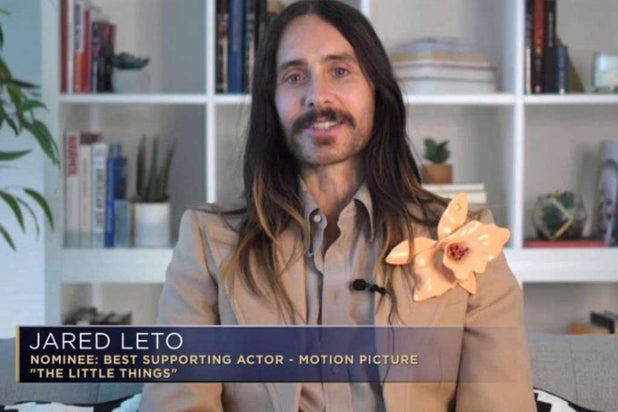 There may have been no red carpet at the Golden Globes this year (thanks, COVID), but we still had our fair share of viral fashion moments — like Jared Leto’s oversized pink flower, which one Twitter user dubbed “the love child of Gucci and Carrie Bradshaw.”

The actor teased his Golden Globes look earlier on Sunday evening when he tweeted a photo of him wearing a cozy knit sweater. While many expected to find that casual look on camera tonight — especially given the lax, virtual nature of the awards show — Leto surprised viewers by showing up dressed in a tan suit and a totally unmissable flower brooch.

Leto appeared virtually from Nevada, first during NBC’s Golden Globes pre-show with Jane Lynch to discuss his movie “The Little Things,” and then during the Best Supporting Actor category in which he was nominated. While he ultimately lost the award to Daniel Kaluuya, he definitely won the internet’s approval for his unparalleled style.