TikTok has become a focus area for ESPN and its strategy has been effective.

In the past year, ESPN saw the second-biggest spike in new followers among brands on the app (behind Netflix), a report from the video-analytics firm Conviva found. It now has around 14 million followers on its main account and over 1 million fans on its Spanish-language account, ESPN Deportes.

Many of ESPN’s videos feature feel-good moments in sports, like a clip of a young fan hitting with Roger Federer or a Tampa Bay offensive lineman hugging his mother after winning the Super Bowl.

But the company also pays close attention to what everyday users are doing on the app. Like other media companies that have found success on TikTok, ESPN knows that participating in day-to-day trends is a key to building an audience.

“We really need people who are dedicated to understanding the algorithm and what resonates,” said Kaitee Daley, ESPN’s newly promoted VP of social media. “We do have folks focused on TikTok. The same team also does program some Instagram accounts, so it’s not entirely exclusive, but there’s certainly a level of focus [required] for these newer platforms.”

ESPN posts as many as 12 videos a day on its main TikTok account, so finding fresh content is paramount. Most of its videos feature game highlights (like dunks), behind-the-scenes posts from on-air talent like Omar Raja, or funny — or athletically impressive — user-generated videos. And it’s collaborated with some of TikTok’s biggest stars, such as Charli D’Amelio and Addison Rae Easterling.

The company said it has approximately 60 staffers that work on content creation for social platforms. And its social team meets regularly to drill down on video analytics and understand what types of videos are working on which platforms.

“We have a weekly team meeting where we are talking about trends and looking at our metrics and making decisions to tweak our approach,” Daley said. In one recent call, the team discussed reposting on other platforms gymnastics videos that had performed well on Facebook.

On Thursday, the team was going back and forth on Slack about a new TikTok trend where the app’s users were posting videos of themselves removing their beards via a Snapchat filter. One video idea the team discussed was virtually “shaving” the beard of Brooklyn Nets’ guard James Harden.

While ESPN’s TikTok account grew quickly last year, sports content in general has become a popular category on the app.

Brands like Overtime, Barstool Sports, and House of Highlights also added millions of followers in the past year, Conviva reported. Barstool Sports told Insider that 45% of its new audience growth came from TikTok last year.

Short-form video is a particularly well-suited format for sports replays and game highlights, though the videos that take off on TikTok are at the mercy of its content recommendation algorithm, which can be unpredictable.

ESPN’s social team uses multiple TikTok accounts to browse the app so they can see what types of videos are recommended to different users on TikTok’s “For You” content discovery page. Daley herself says she has five separate accounts.

“You want to be thinking about the different types of sports fans that are out there and making sure that your consumption experience on TikTok is reflective of the diversity that exists across sports,” she said.

ESPN’s TikTok audience skews female when compared to its other social accounts. The company told Insider that 47% of its TikTok followers are women. On other social platforms, that percentage falls roughly between 20% and 30%, Daley said. But the team tries not to focus too much on user demographics. 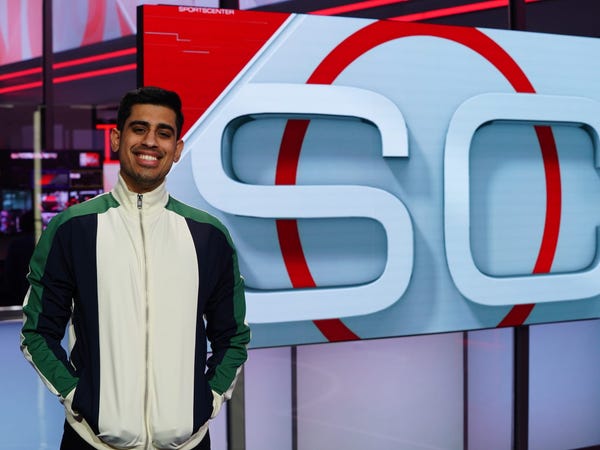 The company also leans on the social-media savvy of one of its personalities, Omar Raja, who joined the company a year ago after founding the popular Instagram account “House of Highlights” (which he sold to Turner-owned Bleacher Report in 2015).

While Raja makes on-air appearances across various ESPN platforms, he also leads a team of four staffers focused on social programming (and is a TikTok star himself). He records voice-overs for ESPN videos and will sometimes test out videos on his own TikTok account before they go live on ESPN’s main account.

Raja, who built his career by launching one of the first sports media brands native to Instagram, said he now spends most of his time on TikTok.