How Bradley Cooper found his muse in Lady Gaga

Lady Gaga had no idea that her life was going to change on the night she performed La Vie en Rose at a 2016 fundraiser held in a friend’s Hollywood home. She was also unaware that Bradley Cooper was there, until the following day when her agent called with the news that the writer, actor and director of A Star Is Born wanted to meet her and talk about casting her in the film.

“So Bradley came to my home in Malibu and I opened the door and I swear the second I saw him, we just had an instant connection,” Gaga recalls with a smile. “Before I knew it, I was heating up leftover pasta for him. We really hit it off.”

Cooper remembers being blown away by her performance that night (one she repeats as her introductory song in the film) and he was excited that he might have found his muse.

“I asked if I could go meet her, because I didn’t even know what she really looked like,” he bluntly acknowledges. “I remember she came down the stairs and looked like Lady Gaga but I’d never got to see her eyes and when we sat down, her eyes were so beautiful I knew it had to be her.”

Gaga says the audition wasn’t quite so simple. Within five minutes of sitting down, Cooper suggested they try singing The Midnight Special, a traditional folk song most famously performed by Creedence Clearwater Revival in 1969.

“I quickly printed out the piano sheet music and I was sight reading, so I was very nervous,” she recounts. “But I knew the song a little bit and started to play. And as soon as he started to sing I just stopped playing and said, ‘Oh my gosh, Bradley, you have an incredible voice!’ 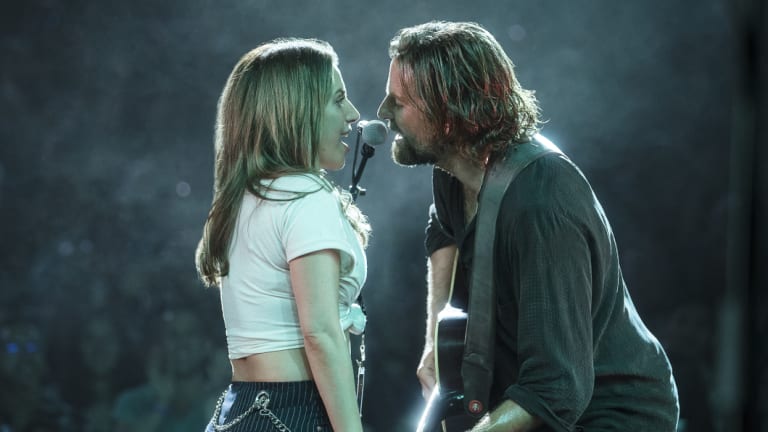 Lady Gaga, left, and Bradley Cooper in a scene from A Star is Born.Credit:AP

“Then we started singing and immediately we started harmonising and laughing and looking at each other. And in that moment, I think we both really knew that it was something we could do together.”

After weeks of negotiations – not unlike what I’d imagine it takes to get into a room with a world leader – I’m finally sitting across a table from Stefani Joanne Angelina Germanotta, aka Lady Gaga. (“You can call me Stefani, Gaga or Lady Gaga – my friends and family call me all of them,” she responds when I ask what she’d prefer.)

We’re in a glass-walled conference room at a local Masonic Temple – no significance, it turns out, except as an available space to do publicity before the film’s Toronto Film Festival premiere.

Like Cooper, I wasn’t sure who I’d be meeting either. Lady Gaga burst on to the music scene 10 years ago with her debut album, The Fame, and has dominated the charts ever since with hits including Just Dance, Poker Face, Born This Way, The Edge of Glory, Bad Romance and her 2014 jazz album, Cheek to Cheek, with Tony Bennett.

Like other one-name wonders – think Cher, Madonna and Beyoncé – the six-time Grammy winner, who also won a Golden Globe in 2016 for her TV role in American Horror Story and an Oscar nomination the same year for best original song (Till It Happens to You), has a larger than life persona, whether you’ve heard her sing or not. Her success at reinventing herself, often in provocative ways (yes, meat dress, I’m talking about you!) almost eclipses her talent.

Not surprisingly, the soft-spoken artist sitting across from me in a pink one-shoulder Jonathan Simkhai dress is still something of an enigma. She can break your heart recounting the adolescent trauma of being thrown into a rubbish bin by bullies but then intuitively steer clear of discussing her boyfriend of one year, Hollywood agent Christian Carino, realising that not everything is for public consumption. The only time I hear her laugh is when Cooper playfully pushes up against the glass wall separating them and she sticks her tongue out at him. 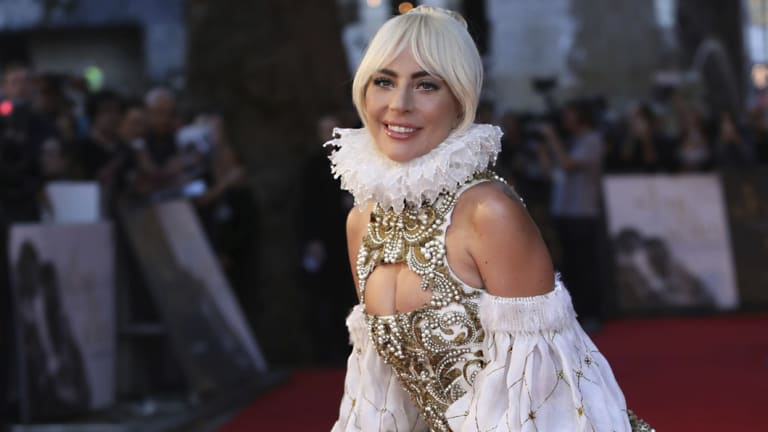 Lady Gaga at the London premiere of A Star Is Born on September 27. Credit:AP

Gaga says she relied on Cooper to help her pull off her first leading role in a major feature film but he also relied on her to turn him into a convincing rock star. At this point, she leans across the table with an outstretched hand and asks me to shake it.

“This handshake was the most crucial thing for us,” she explains as she re-enacts her solemn contract with Cooper. “We shook hands and Bradley said, ‘I, Bradley, believe and accept you, Stefani, as an actress.’ And then I said, ‘I, Stefani, believe and accept you, Bradley, as a musician.’ I think that exchange was what really held the collaboration so strongly together.”

Cooper and Gaga have clear on-screen chemistry, not just as characters who fall in love but also as musical artists (they co-wrote some of the songs and performed them at arenas and festivals). And Gaga convinced Cooper to film all the performances live. “I dislike it when I’m watching a movie and you can tell they’re lip-syncing,” she says.

It’s no surprise the role of Ally spoke to Gaga. The first version of the film, starring Janet Gaynor and Fredric March, came out in 1937. It was followed by Judy Garland and James Mason in 1954 and Barbra Streisand and Kris Kristofferson in 1976.

Gaga has spoken before about her love for Garland and she also reveres Streisand, whom she met three years ago at a dinner party arranged by Ryan Murphy, Gaga’s friend and a director of American Horror Story. 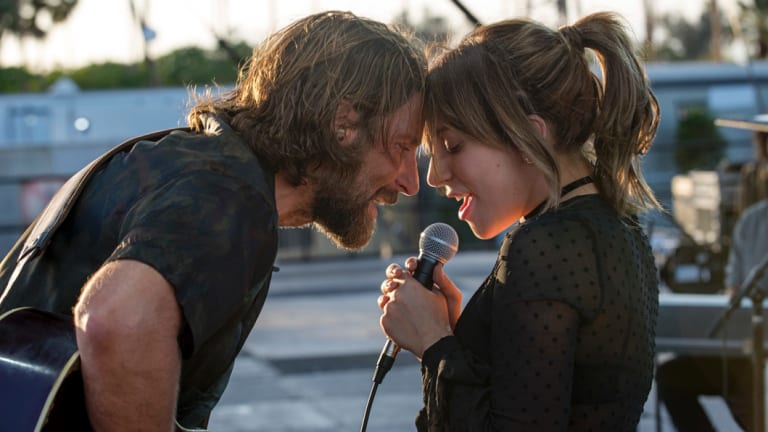 A scene from A Star is Born.Credit:AP

“Barbra actually came to set and gave a beautiful speech and passed the torch to me, which was a phenomenal experience,” she reveals. “We showed her some of the film that day, too, and she was so kind and wonderful.”

Born in New York City, Stefani Germanotta was a prodigy who mastered the piano at the age of four, wrote her first ballad at 13 and was performing on stage by the time she was 14. After school, she waited tables by day and performed in dive bars at night. She smiles as she recalls her early career, including the New York burlesque show Lady Gaga and the Starlight Revue, with performer Lady Starlight.

“We wore matching bikinis and we did this song and dance for the 30 people who fitted inside the bar,” she says. “But about 15 minutes in, I looked up and saw that there were around 100 people on the street taking pictures. I’ll never forget that feeling, knowing our voices were being heard.”

In this latest retelling of A Star Is Born, Ally has given up on her dream of being a full-time singer. Instead, she waitresses and performs once a week at a drag club run by friends. When famous musician Jackson Maine (Cooper) happens to see one of those performances, the pair strike up a connection that changes their lives.

Gaga says she gave Cooper plenty of material based on her own experiences in the music industry to put in his script and nods when asked if Ally’s insecurity about her looks, including her big nose, came from her. “This absolutely happened to me,” she says. “It was suggested I get a nose job before my first single came out, and I said no because I love my Italian nose.

“I didn’t always,” she adds, “but I learnt to love who I was and I worked hard to maintain my authenticity. If someone wanted me to look like a sexpot, I wanted to look the opposite, so I was always trying to challenge the norms about women in pop music.”

While she seems more at home in Toronto wearing heavy make-up, overthe-top outfits and coiffed peroxideblonde hair, the petite star admits her character inspired her to take a chance and aim for less, not more.

“This role and transformation asked me to call upon things that happened much earlier in my life when I felt very self-conscious and didn’t feel beautiful,” she says of dying her hair brown and wearing no make-up for the duration of the shoot. “Staying in that vulnerable state for so long was difficult but also liberating.” 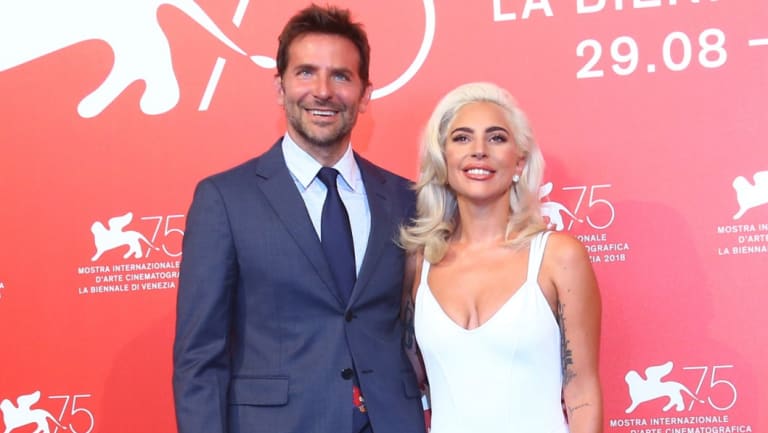 In December, Gaga will be back in diva mode as she begins a Las Vegas residency with a show aptly titled Lady Gaga Enigma. She signed a $US100 million contract to perform 74 shows over two years and promises to deliver.

“I’ve worked for 10 years now in this business and I am excited to reinvent what it means to be in Las Vegas at this age,” she teases. “I also want to give something back to fans.”

Her devotion to her fans is legendary – Gaga has always proclaimed herself to be Mother Monster to her Little Monsters – and she offers mental health support for young people through her Born This Way foundation, promoting love, acceptance and self-expression. When asked what she wishes she could have told her younger self when she was thrown into that trash can, she pauses.

“What I would say to the little me – or to all the kids who felt that way – is this: ‘Hold on to one spark of light in your heart, hold on to it for dear life and just watch it grow.’ It’s like a garden. Maybe there is only one rose, but if you focus on that one rose, eventually it will bloom into a field of flowers.”

In her case, it seems the flowers have taken over the garden.