In Nicole Riegel’s feature debut, Jessica Barden stars as an Ohio teenager who strips buildings of metal to earn cash. 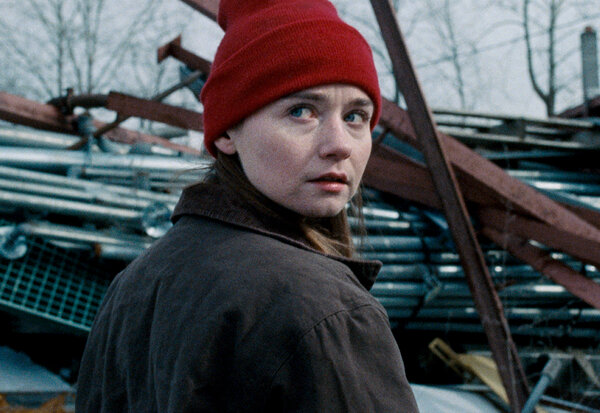 “Holler” begins with Ruth (Jessica Barden), its protagonist, running. She’s racing to drop trash bags into the flatbed of a truck, where her brother, Blaze (Gus Halper), is waiting. They high-tail it from the scene and sell discarded cans to Hark (Austin Amelio), who pays them chump change for metal. Soon, they will graduate to higher-stakes scrap work: stripping deserted buildings of wiring for larger payoffs, with even bigger risks.

The central question of the movie is whether Ruth will summon the courage to run again, to flee her hometown. The director, Nicole Riegel, making her feature debut, shot the film in the section of southern Ohio where she’s from. Riegel has said that Ruth’s story was inspired by her own challenges leaving the area. Even the medium — Super 16-millimeter film, in the era of digital — adds to the ambience of rusting, abandoned machinery.

Ruth has little overt incentive to stick around. She hides an eviction notice under a flower pot. Her mother (Pamela Adlon) is a drug addict in a county jail. But Ruth gets an unexpected — and, to a condescending teacher at her high school, impractical — offer of college admission: Although she had prepared the application, she never submitted it. Blaze did that for her.

The film strikes an unanticipated false note with its ending, which initially seems too easy — a way to avoid resolving conflicts. But despite a parting smile, and the music of Phoebe Bridgers over the credits, the final moments becomes bleaker upon reflection. The only way to end this story is to abandon it.