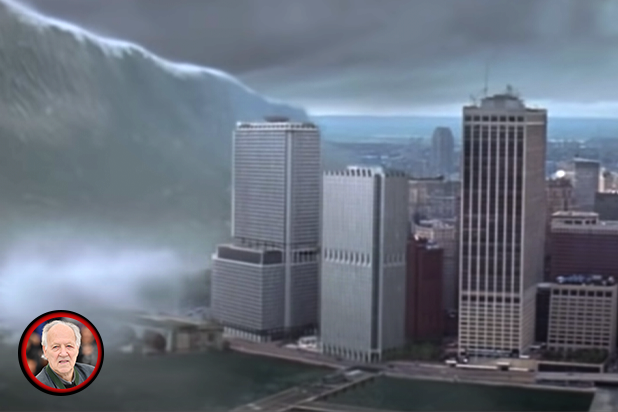 Werner Herzog’s “Fireball: Visitors From Darker Worlds” is an aptly meditative travelogue from the philosophical German director. In the last decade or so, Herzog’s documentary output has focused on, among other topics, volcanoes (“Into the Inferno”), prehistoric paintings (“Cave of Forgotten Dreams”) and Antarctica (“Encounters at the End of the World”). In “Fireball,” co-directed by Clive Oppenheimer and available now on AppleTV+, he turns his attention to meteors and comets.

Herzog and Oppenheimer jet to all corners of the globe to engage with astrologists, geologists, religious leaders, self-made scientists, space rock collectors, and people in communities living around some of the world’s largest craters.

In one of the film’s most intriguing scenes, Herzog offers a tribute to Hollywood’s contribution to the subject. He shows us a slightly abridged version of the climactic comet strike in Mimi Leder’s 1998 disaster flick “Deep Impact.”

“Deep Impact” is a movie that, Herzog has admitted, he’s never seen in its entirety. That’s not so much the point of its usage in “Fireball.” And after all, the occasional character actor also accepted a supporting role in the first season of “The Mandalorian” — and delivered a rich, cunning performance — without ever viewing a “Star Wars” film.

In the film, Herzog is generous in his praise of the apocalyptic imagery in the “Deep Impact” destruction scene. In his classic Bavarian accent, he narrates, “I want to show an excerpt of a movie where physical and existential fear are just the shudder audiences go for.” He pauses, then adds, right as the comet smashes into the ocean, “This is beautifully done.”

Film editor Marco Capalbo has worked with Herzog on multiple film and television projects since the two met first met in 2012, when Capalbo edited a music documentary about the band the Killers, directed by Herzog. Capalbo knew that the “Deep Impact” scene would be catnip for the filmmaker, and well worth the budget funds needed to acquire the clip for use.

“It’s all well and good for us to talk about the earth’s destruction from an impact event,” Capalbo told TheWrap. “But we really needed something on the screen to show it. I had the benefit of knowing that Werner is entranced with special effects scenes like these. He has deep respect and admiration for scenes like this, even if it probably wouldn’t be his approach as a narrative filmmaker. His narration provides another layer of observation, since we get to hear the genuine awe he feels watching that scene.”

During the editing process, Capalbo and Herzog realized that the scene also includes a haunting reference that dates “Deep Impact” as a movie released before the year 2001. “It’s an older movie than we thought, despite how great the special effects are,” Capalbo said. “That’s because, when downtown Manhattan is being destroyed by a mega tsunami in the clip, you can see the twin towers of the World Trade Center.”

The two men discussed the decision to include or remove that part of the scene in “Fireball.” “We could have cut one second before and then you wouldn’t have seen the World Trade Center at all. We talked about it for awhile but in the end we decided that showing it gave the excerpt a whole other level of power.”

A deeper rationale for including the World Trade Center also emerged. Chaos and extinction are themes that have obsessed Herzog for more than 50 years — they are the fruitful, often ironic stuff of internet memes devoted to the director’s choicest doom-and-gloom quotes.

Capalbo explained, “What’s amazing is that angle on the buildings toppling in ‘Deep Impact’ is almost exactly the same as what actually happened three years later. Werner argued to keep it for that reason, too. This was a science fiction film in which audiences couldn’t imagine a nightmare as bad as that. It wasn’t a tsunami, but that part of the nightmare actually happened.”

Moments like that one in “Fireball” are a key to Capalbo’s working relationship and friendship with Herzog. Having been collaborators for much of the past eight years, the two men share a sense of job efficiency and a keen eye for oddity in the world. In another scene in “Fireball,” Herzog and Oppenheimer are visiting the Ensisheim meteorite at a museum in France, when Herzog’s attention is pulled away to another exhibition. It’s an animated hologram face of a miner named John, who gives a message in French to potential extraterrestrial visitors.

“That was something that Werner just shot with his camera because it was there,” Capalbo said. “And that’s what I love about working with him and editing scenes like that. That moment would be so atypical in most documentaries — it’s bizarre and absurd and doesn’t really have much to do with the topic.

“But when that’s the case, it’s made just for Werner. He takes things to another level.”