Here's what the First Man flag controversy is all about

While Damien Chazelle’s last movie La La Land was met with that whole Best Picture kerfuffle at the Oscars long after its release, his new movie First Man has been hit with controversy before it’s even hit cinema screens.

Based on the book First Man: The Life of Neil A Armstrong by James R Hansen, the epic and emotional biopic tells the story of Apollo 11’s mission to become the first to land on the moon. Since its premiere at Venice Film Festival, it’s garnered strong critical acclaim ahead of its opening next month in cinemas – but one detail threatens to derail its launch.

Yet when you watch the movie, you might wonder what all the fuss is about. So we’re here to tell you it’s all about one thing – the American flag.

The controversy surfaced shortly after the world premiere, when it was reported that First Man doesn’t feature a scene of Neil Armstrong (Ryan Gosling) and Buzz Aldrin (Corey Stoll) planting the American flag on the moon’s surface.

It’s a decision that was branded “total lunacy” by American senator Marco Rubio, among others, and – spoiler alert – the version of the movie we saw didn’t feature a scene where Armstrong and Aldrin plant the flag, although that classic line is in there.

In a statement defending his decision, Chazelle denied that it was a “political statement” and that his aim for the movie was to share Armstrong’s “personal saga”. 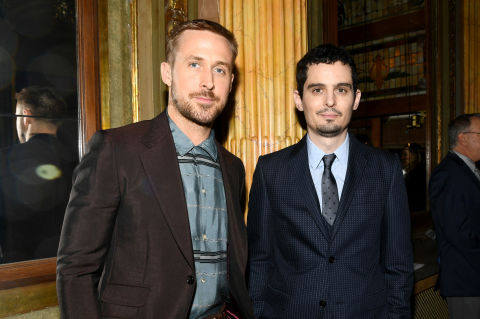 “I wanted the primary focus in that scene to be on Neil’s solitary moments on the moon — his point of view as he first exited the LEM, his time spent at Little West Crater, the memories that may have crossed his mind during his lunar EVA,” he said.

“This was a feat beyond imagination; it was truly a giant leap for mankind. This film is about one of the most extraordinary accomplishments not only in American history, but in human history. My hope is that by digging under the surface and humanising the icon, we can better understand just how difficult, audacious and heroic this moment really was.”

Armstrong’s sons Mark and Eric backed Chazelle’s decision in a joint statement with the book’s author: “We do not feel this movie is anti-American in the slightest. Quite the opposite. But don’t take our word for it. We’d encourage everyone to go see this remarkable film and see for themselves.”

However, Aldrin himself doesn’t seem too happy with the decision, even if he hasn’t directly addressed the issue, only sharing a tweet with pictures of the flag-planting.

Gosling joked that he might not have a problem with the decision because he’s Canadian and he “might have cognitive bias”, but this feels a bit like a situation where the controversy has only made a noise because the movie isn’t out yet.

First Man is very much an intimate take on the extraordinary achievement of Armstrong, Aldrin and everyone else involved, focusing instead on the personal impact of the mission to the astronauts and their families. To that end, Chazelle’s decisions when the movie reaches the moon make perfect sense.

We see the American flag in the background as Chazelle chooses to focus on what Armstrong was feeling in that moment, delivering an emotional punch that we won’t spoil for you here. It’s a moment that has universal appeal and will make a bigger impact than any flag-planting scene would do for anyone who isn’t American.

And if you’re worried that the movie itself features a lack of American flags, it really doesn’t. Here’s one right here:

It’s worth remembering that even the initial planting of the flag wasn’t without controversy, as there was discussion that a United Nations flag should be used instead.

“My job was to get the flag there. I was less concerned about whether that was the right artefact to place. I let other, wiser minds than mine make those kinds of decisions,” Armstrong said of the original flag concerns.

We shall see if all the controversy affects First Man at the cinema and during awards season, but at the moment, we have a feeling it’ll soar.

First Man is out now in cinemas. Book tickets here.