Halloween goes right back to John Carpenter’s seminal classic and it might have even been more nostalgic with its original opening.

Talking to Digital Spy, director David Gordon Green – who also co-wrote the movie with Danny McBride and Jeff Fradley – revealed that the initial plan for the opening to his Halloween sequel was to link very closely to the end of the first movie.

If you’re avoiding any kind of spoilers for Halloween, even for stuff that’s not in it, don’t read past the trailer.

Green explained that the movie originally opened with Michael Myers being arrested back in 1978 after his killing spree to give the audience “some context”. However, they realised that to perfectly replicate the original set, it was going to be expensive.

“When I was talking to [John] Carpenter about these frustrations, he said, ‘You don’t need it. The audience are going to pick it up, and they’re going to understand what’s happening. Just give one line, and save yourself the time and money’,” he recalled.

This sequence would potentially have featured the death of Dr Loomis (original actor Donald Pleasence passed away in 1995), an idea that Green admitted was probably talked about in the writers’ room, but “never set up to produce”. 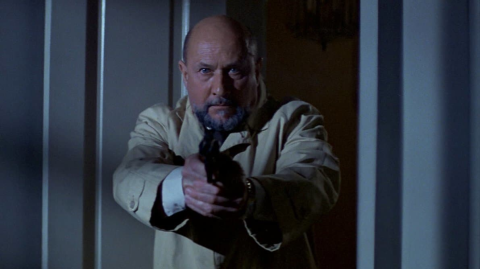 “But it was more about acknowledging that Michael had been apprehended, rather than just that it happens off-camera,” Green noted of the alternate opening.

It resulted in an unexpected benefit though as the half-built original set ended up featuring during a key scene later on in the movie, set in Laurie Strode’s (Jamie Lee Curtis) house.

“The real bedroom at the house that we were shooting was so small, we could’t move the camera around too much. So we said, ‘Why don’t we just use that set? And we’ll put [tailoring] on the walls so that it matches the house’,” Green outlined.

“And so, if you look at it closely, her bedroom is an exact recreation of the climax from the original film. And that was not the original intent, but a beautiful example of when a financial obstacle can become a creative opportunity.”

So at least now you have another thing to look out for when you see Halloween this weekend.

Halloween is released in cinemas on October 19.