For the Documentarian Alice Diop, Only Fiction Could Do Justice to a Tragedy

“Saint Omer” borrows details from a case of infanticide in France, which the director found raised profound but very personal issues. 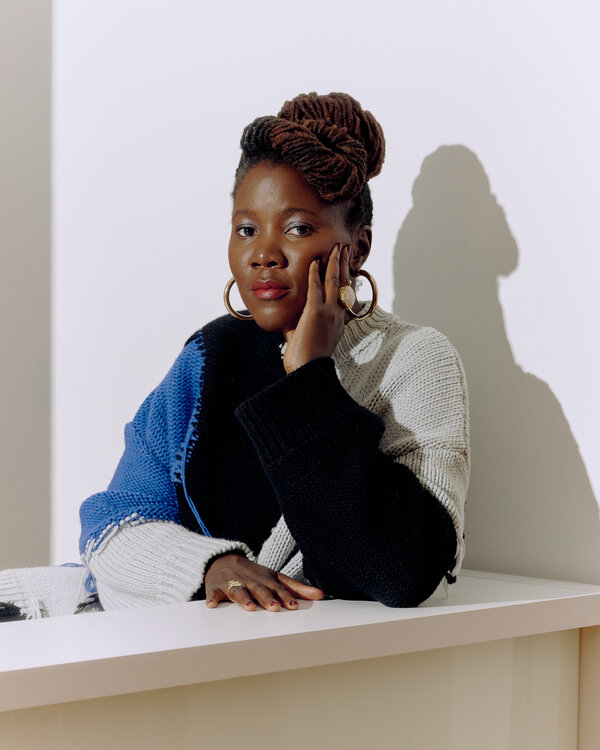 When the French director Alice Diop attended the trial of Fabienne Kabou, a woman who left her 15-month-old daughter on a beach to drown, she wasn’t intending to make a movie. She felt an “unusual identification” with the person at the center of the 2016 case, she said in a recent interview, who like her was a Black woman of Senegalese descent with a mixed race child. She believed there was a “nearly mythological dimension” to the tragedy.

As the proceedings unfolded, however, Diop realized she wasn’t the only woman who had been drawn to the town of Saint-Omer in the north of France to observe Kabou. Looking around her during the defense’s closing arguments, Diop saw others in tears. “The story was bringing everybody back to profound and very personal issues,” Diop said through an interpreter during an interview in New York last week. She continued, “The conviction that I was going to do a film about it came from that very moment.”

Her experiences sitting in that courtroom have morphed into “Saint Omer,” the documentarian’s first venture into narrative features. Upon premiering at the Venice Film Festival last year, it was awarded the distinction of best debut film and the Silver Lion Grand Jury Prize, essentially second place at the prestigious event. It is now shortlisted for the Academy Award for international feature. Diop is the first Black woman to direct a film France has submitted for Oscar consideration.

“Saint Omer” adds a fictional superstructure to Kabou’s case, with the novelist Rama (Kayije Kagame) providing the audience’s window into the trial of Laurence Coly (Guslagie Malanda). The details of the case remain the same: Like Kabou, Coly does not deny killing her daughter, born in secret and the result of a relationship with an older white man, but describes a descent into madness brought on by “sorcery.”

Though Rama is ostensibly there to conduct research for her next book, a riff on Medea, watching Laurence provokes her to contemplate her nascent pregnancy as well as her strained relationship with her own mother. Diop shifts between an intimate portrayal of Rama’s silent moments alone with her thoughts and her changing body, and Laurence’s harrowing testimony rendered in long, unbroken shots that force the audience to both sit with disturbing information and consider this woman’s humanity.

To Diop, training the camera on a complex Black woman for that length of time was a “political act,” she said, adding, “It was also a way to show a Black woman in a way that I had never seen shown before.”

The film has a raft of heavyweight fans. In his Critic’s Pick review for The Times, A.O. Scott called “Saint Omer” an “intellectually charged, emotionally wrenching story about the inability of storytelling — literary, legal or cinematic — to do justice to the violence and strangeness of human experience.”

The director Céline Sciamma (“Portrait of a Lady on Fire”) compared the experience of watching “Saint Omer” to what it must have been like in 1975 to watch Chantal Akerman’s “Jeanne Dielman, 23 Quai du Commerce, 1080 Bruxelles,” recently named the best film of all time in the Sight and Sound poll. “One finds oneself in front of a cinema poem — Alice’s language, in the history of the language of cinema to which it belongs, but also in her own history, is dangerous and radiant,” Sciamma said via email.

Diop, 43, came to filmmaking after studying colonial history at the Sorbonne, where she recognized her desire to unpack French society and the lingering effects of colonialism from her perspective as the daughter of Senegalese immigrants. She could have chosen other ways to explore the subject, but, to her, cinema held the most power.

That calling is evident, for instance, in “We (Nous),” her 2022 documentary. It’s made up of a series of unconnected vignettes capturing a diverse array of life in the Paris suburbs, and also includes archival footage of Diop’s own family and her reminiscences. Though “Saint Omer” is her first foray into fiction, she sees it as a “continuation and extension” of the rest of her oeuvre.

As Diop was observing Kabou’s trial, she started to keep a diary recording what was said, which would eventually become the framework of the screenplay she wrote alongside her editor, Amrita David, and the novelist Marie NDiaye. Diop’s note-taking was both a result of her instincts as a documentarian and a coping mechanism.

“I believe that by writing it I was creating a distance with the subject of this matter that was so corrosive, so difficult,” she said, sitting in the empty Film at Lincoln Center amphitheater as “Saint Omer” played on one of the theater’s screens, her expertly tailored tan coat complementing the room’s orange seats.

The longer Diop spent writing down what Kabou said, the more precise her notes became. “The film started to be born within my notes,” she said. But she didn’t want the film to be a straight recounting of events, and realized in the writing process that she needed another character whose reaction to Laurence could highlight the themes of maternal ambivalence she wanted to explore.

Rama is not autobiographical, Diop said, a point reiterated by Kagame, the actress who portrays her. “Alice always had this cautionary warning before everything, saying, ‘Rama is not me,’” Kagame said through an interpreter during a video call. Equally, Kagame added, “Of course, I think any artist is always putting so much of themselves in their creation. Rama is her and yet it is not her so that we can all project ourselves in Rama.” Indeed, Diop said that Rama’s gaze did allow her to “process lots of very deep personal things.”

Though Diop said that fiction was the best form for “Saint Omer,” despite its real-life influences, she did approach the casting process with her documentary work in mind. “I was not looking for actresses that could perform the part,” she said. “I was looking for someone that would be the part as much as possible.”

For Malanda, who had not acted in seven years before the role came to her, becoming Laurence took its toll. She explained in a video call that she had nightmares for a full year, and that the effects of playing a woman responsible for the death of her child still linger. “The story is in my body forever,” she said. “This may be the most weird but also the most true empathy.”

Malanda felt supported during the production process, she said, but isolated by the fact her character spends the movie standing trial. Diop and the first assistant director told Malanda she was “possessed” during filming, Malanda said, adding, “I think it’s true.”

That specter of the tragedy lingered on set, especially given that Diop filmed in the actual Saint-Omer courtroom where Kabou’s trial took place. In that space, reality and fiction blended.

“She did everything she could to place everyone in that same emotional situation, as if we had been in the actual trials,” Kagame said. This setting added verisimilitude, but also made the experience emotionally charged. “It was very strange, but I felt that I started a sort of collective haunted situation,” Diop said.

During filming, the majority-female crew went through what Diop described as group “collective psychotherapy” as they individually reflected on their own bonds with their mothers and children. Though Diop is reluctant to say too much about how the experience of “Saint Omer” changed her views on the subject, because she wants audiences to come to their own conclusions, she did experience a shift.

“There is no doubt that the process of going through this film is something that healed me,” she said, “that helped me put lights on certain things, that helped me repair some wounds.”