Fantastic Beasts: The Crimes of Grindelwald will build on Harry Potter lore in some major ways. We already know there will be more about Albus Dumbledore’s early (or at least earlier) years, and the introduction of Nagini as a human before she became Voldemort’s right-hand snake.

But speaking about the upcoming sequel, stars Eddie Redmayne and Dan Fogler have hinted that there is one twist that links the prequel series to the original books in a major way – one that no-one will see coming.

“The script is labyrinthian,” Redmayne – who is returning as magizoologist Newt Scamander – told EW. “It’s like you’re going down this maze and [JK Rowling] is weaving the stories together with such intricacy. Along the way, these connections to Harry Potter and secrets are falling at your feet. And there is one…

“I got to the end and my jaw dropped. There was one thing I didn’t see coming.”

Fogler – who reprises his role as New York muggle/no-maj Jacob Kowalski – doubled down on the promise of some major twists and turns. 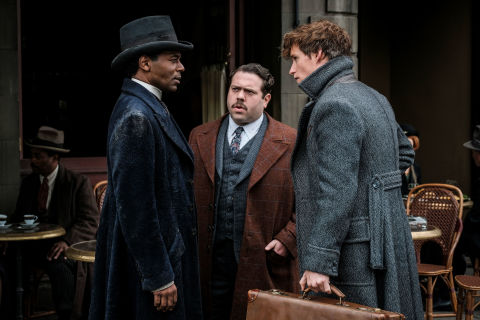 “It reminds me a lot of The Empire Strikes Back,” he said. “The first movie is so positive. It’s sweet and lovely. But this time everybody is really put under fire.

“People are gonna see this like, 100 times just to get everything. They’re going to be going nuts that they have to wait for the next one.”

The revelation that Claudia Kim is playing Nagini – a ‘Maledictus’ doomed to be permanently transformed into a snake – has proved controversial among some fans, who are unhappy that one of the franchise’s few Asian characters is destined to be Voldemort’s pet.

Speaking of controversy, Johnny Depp recently confirmed that he will return as Grindelwald in the third movie.

Fantastic Beasts: The Crimes of Grindelwald will be released on November 16.