Michael Moore versus Donald Trump: it's a grudge match that was always destined to happen. 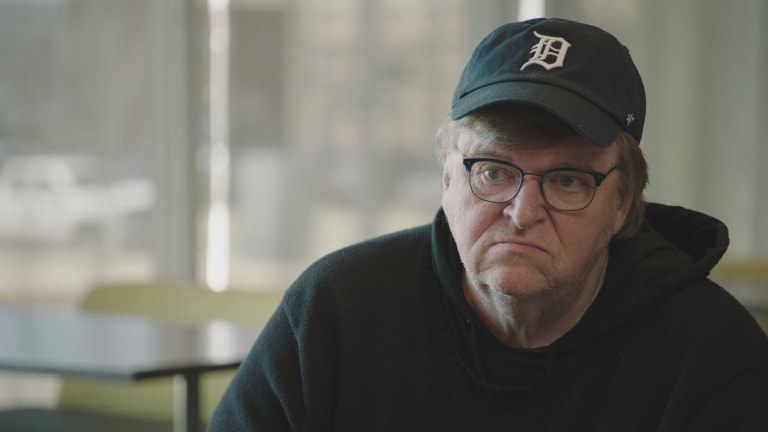 Moore does an impression of a big lug keen to be informed by those who know what’s really going on.

Despite being at opposite ends of the political spectrum, Moore and Trump have at least a few things in common: a fondness for baseball caps, the man-of-the-people schtick and the flair for provocative statements that endear them to their base.

Moore appears a decent and principled man, at least judging by the scarcity of dirt on him despite the many foes who would be glad to dig it up.

His latest political essay film is not just a look at Trump's rise but a state-of-the-nation address in his typical rambling vein, blending interviews, stunts, droll narration and clips dug up from the archive edited together for maximum damaging effect.

Some sections are witty and focused, others silly and questionable – but there's no doubting the sincerity of his anger and concern.

Significantly, this anger isn't directed solely at Trump. Like other Moore films, Fahrenheit 11/9 is something of a bait-and-switch – saving much of its sharpest criticism for the Democratic Party and the American mainstream media, both unwilling to look beyond the tenets of a centrism that in other parts of the world would be considered well to the right.

America, Moore insists, is a leftist country – and he has the statistics to back him up, citing polls that show the majority of Americans hold progressive views on subjects ranging from immigration to medical marijuana.

This is Moore at his best, and it's refreshing, too, that he's willing to bypass many standard political talking points (Russian meddling in the 2016 election, for instance).

In between denouncing Trump's policies, much of the movie is occupied by the search for signs of hope, with Moore doing his usual impression of a big lug keen to be informed by those who know what's really going on.

He meets members of the new wave of left-leaning Democrats such as House candidate Alexandra Ocasio-Cortez, and the "Parkland kids", who became powerful advocates for gun control in the wake of the February 2018 mass shooting at their Florida school.

Most powerful is the lengthy segment devoted to the water crisis in Moore's hometown of Flint, Michigan. Moore spares nothing in chronicling the horrific health consequences of the change in the city's water supply, and the subsequent efforts of officials to minimise the situation or evade blame.

The connection to Trump here is oblique, but we're shown enough to suggest why working-class Americans might yearn for change from any quarter – especially when Obama's underwhelming response to the crisis is revisited in one of the most devastating clips.

Just as crucially, these scenes tie Fahrenheit 11/9 in with Moore's past work, harking back to his 1987 first feature Roger and Me, which focused on the decline of Flint's automotive industry. As in that film, the grim zest of the storytelling suggests a classic American tall tale, where things get impossibly bad and then worse.

This is the ambiguity that we've come to expect from Moore, who's not just a polemicist but also a genuine filmmaker – one who works in the manner of a political cartoonist, by simplifying, caricaturing, and adding his own flourishes to the truth.

Often it's hard to tell just how serious he means to be. A segment comparing Trump's demagogic style with Hitler's is less than illuminating, but is fenced around with enough disclaimers to allow us to take it as semi-flippant provocation.

Similarly, Moore's notion that Trump's presidential campaign was kickstarted by a rivalry with Gwen Stefani could be half in earnest, or it could be satire of pundits who view the current state of the US as a bizarre anomaly rather than a result of trends going back much further.

In short, nothing Moore says should be taken as gospel – and yet his crass showmanship is in some ways an asset, especially when he approaches subjects that can hardly be discussed in decorous terms.

A montage devoted to Trump's comments about his daughter Ivanka is calculated to leave us squirming. But it's not primarily Moore who is guilty of bad taste.