The award was given to Murphy, 61, for “outstanding contributions to the world of entertainment.” 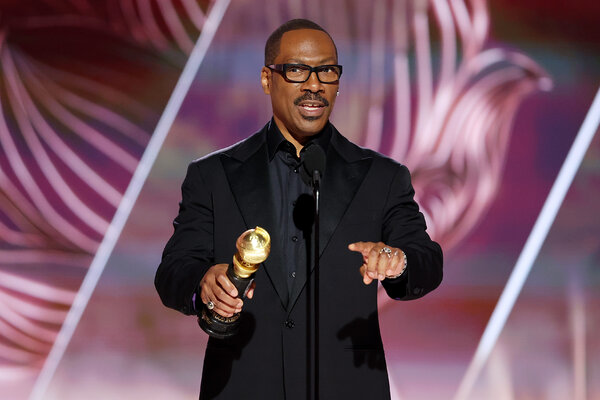 Eddie Murphy, the actor and comedian, accepted the Cecil B. DeMille Award at the Golden Globes for “outstanding contributions to the world of entertainment.”

He didn’t waste the opportunity for a joke, telling all the young artists in the room that he had a blueprint for succeeding: “Pay your taxes, mind your business and keep Will Smith’s wife’s name out your mouth,” he said, adding the expletive that Smith used after slapping Chris Rock onstage at the Academy Awards last year.

Murphy, 61, rose to fame in the 1980s as a cast member on “Saturday Night Live,” becoming a dynamic presence on the show. His stand-up specials from that decade, in which he famously performed in leather suits, cemented him as a singular comic talent. After appearing in a string of blockbuster comedies (“48 Hrs.,” “Trading Places,” “Beverly Hills Cop”), Murphy became one of the biggest movie stars in the world.

His star kept rising with the 1996 comedy “​​The Nutty Professor,” after which he played a veterinarian who can converse with his patients in “Doctor Dolittle,” voiced Donkey in “Shrek” and appeared as part of the ensemble cast in the Oscar-winning adaptation “Dreamgirls,” which earned him a Golden Globe in 2007. In 2021, he reprised his role as Prince Akeem in the sequel to “Coming to America,” one of Murphy’s biggest hits.

Chosen by the Hollywood Foreign Press Association’s board of directors, the honor has been given to Jane Fonda, Oprah Winfrey, Audrey Hepburn, Steven Spielberg, Denzel Washington and Robin Williams.