BTS drop the trailer for their Burn The Stage movie

BTS have dropped the trailer for their new movie Burn The Stage, which features all manner of cool footage of the band performing.

The feature will give us all an insight into the backstage antics of RM, V, Jimin, Jin, Jungkook, Suga and J-Hope and their lives as the world’s biggest boy band.

Oh, and there’s an adorable moment of J-Hope playing with a puppy at the end, because why not?

Burn The Stage is actually a feature-length version of the K-pop group’s eight-part YouTube series, documented during their Wings tour last year.

BTS recently stopped by the UK, playing a string of sold-out shows as well as making an appearance on The Graham Norton Show.

And because they were down one member with Jimin pulling out due to an injury, fellow guest Jamie Dornan offered to step in at the last minute. 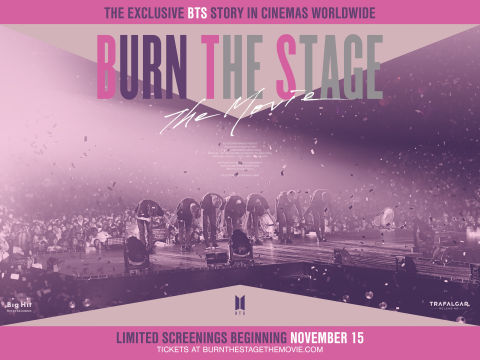 “Can I ask you something – does that mean you’re looking for a new member?” he joked.

They also received a special gift from Whoopi Goldberg after moving her with their message on positivity.

It all comes after a stellar year for the seven-piece band, where they’ve broken all sorts of records and conquered the world in the process.

Burn The Stage will be released in cinemas on November 15.