'Barton Fink' at 30: Why the Coen Brothers' Movie Is a Masterpiece

“It’s strange, but some movies present themselves almost entirely in your head.”—Joel Coen

Everyone knows about the telegram. It’s an apocryphal Hollywood story, with the actual letter lost to time. But its recipient Ben Hecht quotes it in his memoir, A Child of the Century. The famed journalist, novelist and playwright was toiling away in New York when he received a missive straight from Babylon, courtesy of his fellow scribe Herman J. Mankiewicz. “Will you accept $300 per week to work for Paramount Pictures. All expenses paid,” asks the future cowriter of Citizen Kane, before conspiratorially letting Hecht in on the Grand Scam. “Three hundred is peanuts. Millions are to be grabbed out here and your only competition is idiots. Don’t let this get around.” The siren’s call is heeded. Hecht goes on to become one of the greatest screenwriters of Hollywood’s golden age. This promise of easy money does, eventually, get around.

Such compromises usually come with a price, of course — just ask Barton Fink. No sooner has Fink, bard of the common man and the misguided hero of Joel and Ethan Coen’s venomous 1991 masterpiece, scored great opening night reviews for his social-realist melodrama Bare Ruined Choirs than Capital Pictures extends an invite to come west, young man. The movies need people who understand “the poetry of the streets.” Millions are to be grabbed out here. His only competition are philistines. Still, Barton doth protest too much: Won’t being out there in La La Land turn him into a phony? Won’t it cut him off from his subject, the average Joe longing to be given a voice by artists like him?

The answer to the first question is that Tinseltown can’t turn Barton into a phony, because he was already a fake long before he stepped on to California soil. And as for the second one? Like his agent says, there might even be a few common men out in the City of Angels. They are bellhops, and elevator operators, and insurance salesman, and cops. And they are serial killers.

Thirty years ago today, Barton Fink hit theaters, coming off a triple-win at Cannes and confirming that the Coen brothers were not just formalist genre-film brats but bona fide geniuses. Both Joel and Ethan claimed they had no real axe to grind with Hollywood — “Our professional life [there] has been particularly easy,” the former said, “which I’m sure is very unusual and very unfair” — yet they managed to come up with a particularly vicious, nightmarish take on the Dream Factory. Originally taken up as a distraction when the brothers hit a stumbling block in the process of hashing out the script for Miller’s Crossing, and purposefully designed to be a project that would involve John Turturro, John Goodman and a hotel full of ghosts, this acid-dipped valentine to the film industry remains a high point in the siblings’ ongoing (hopefully?) careers. It took them roughly three weeks to write it. Three decades later, it remains an infinitely fascinating, perpetually fucked-up poke at how the studio-era sausage got made, at artistic self-delusion, at the existential dread of writers’ block, at what happens when you choose the life of the mind over life itself. 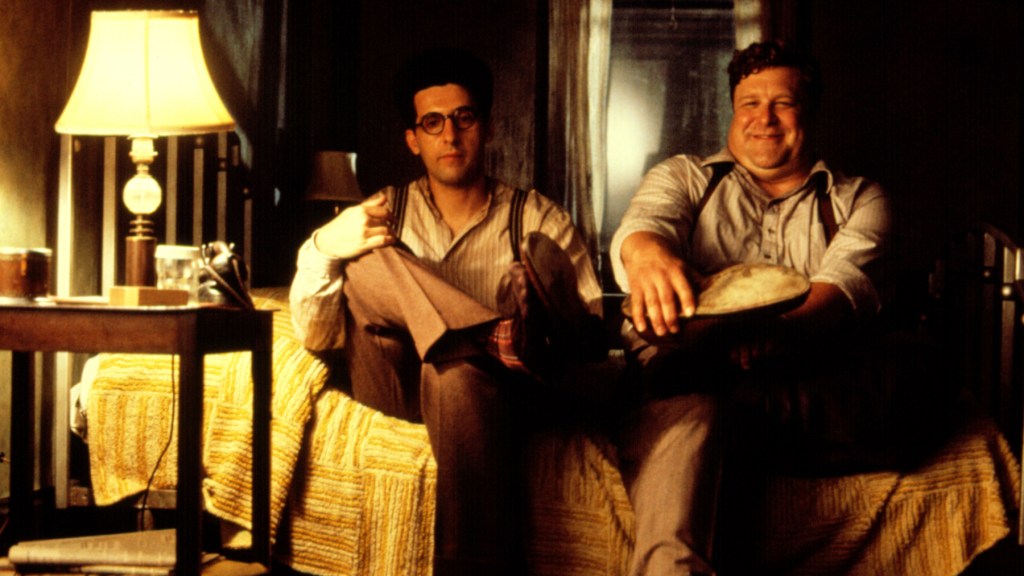 John Turturro and John Goodman in a scene from ‘Barton Fink.’

The usual end-credits disclaimer of “any resemblance to actual persons, living or dead, is purely coincidental” doubles as a deadpan joke here — there are a number of real-life figures that Barton Fink borrow key elements from. Fink is modeled somewhat after Clifford Odets, the playwright and Group Theatre member whose works Waiting for Lefty and Awake and Sing espoused proletariat empowerment and the earthy nobility of the working class; Turturro reportedly read the author’s diary to prep for his role as the righteous, self-proclaimed defender of the little guy. The studio head who hires Bart, Jack Lipnick, is a hodgepodge of early movie moguls from Louis B. Mayer to Harry Cohn (his military uniform cooked up by wardrobe department comes straight from a Jack Warner anecdote). Despite the fact that his assignment couldn’t be simpler — “Wallace Beery, wrestling picture, whaddya need, a road map?” — Fink finds that he can’t get started, so he seeks counsel from one W.P. Mayhew, a Southern dandy and world-class souse who couldn’t be more Faulkneresque. Like The Sound and the Fury author, Mayhew is a novelist doing time in lotus land. Unlike Faulkner, he won’t eventually quit the screenwriting racket and win the Nobel.

And Charlie Meadows, Fink’s next door neighbor at the Hotel Earle (“A Day or a Lifetime”), the traveling salesman who hawks peace of mind? He’s every Willie Loman who’s pounded pavements, lived on the road, harbored a secret life. The Coens purposefully cast John Goodman as the blustery lug, taking advantage of, per Ethan, his “warm, affable image” to draw the audience in — all the better for pulling out the rug underneath them later. Meadows is the real-life case study of the common man that Fink professes to write for, and the barometer for just how much the New York playwright couldn’t care less about the working stiffs. The common man is nothing but a concept to him. Confronted with the reality of the people who shine his shoes and wear nudie-lady neckties, he simply starts babbling on about being their savior on the stage. Meadows could tell him stories. Fink doesn’t bother to hear them. He’s too caught up in his own head.

Ah yes: the head. The word is spoken 24 times in Barton Fink — more if you count references to brains and minds. Despite the claim that Lipnick enlisted Barton for his heart (“The movies need more heart!”), it’s the noggin that the Coen brothers are obsessed with here. The knock against the filmmakers has always been that they don’t have any sympathies for their characters, that they are intellectual formalists snickering up their sleeves at the sad sacks and born losers and, yes, common people populating their movies. That idea would come to be disproven later on — name a movie character of the last quarter century that feels more salt-of-the-earth, sympathetic and simultaneously admirable than Fargo‘s Marge Gunderson — but you can almost detect a warning embedded among the Old Hollywood digs, the skewed showbiz archetypes and the in-jokes: It might not be safe to live solely inside your head. Its contents can be bought, sold and bartered. You might not even own what’s in there anymore. You could lose it at any minute. 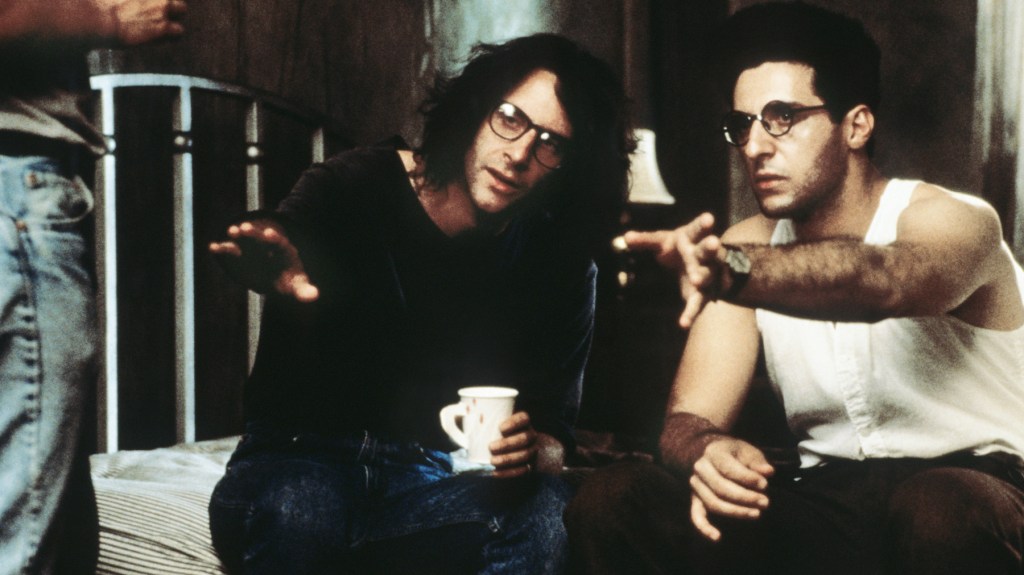 It’s a dark sentiment that, beneath the beaucoup quotable jokes and fairy-tale morality, still resonates 30 years later for those of us who love this movie not wisely but too well. Barton Fink is an easy work to overintellectualize. It’s also, with the benefit of hindsight, possible to see it as a bit of turning point for the Coens, whose first three films were riffs on mid-20th century narrative types — film noir, screwball comedies, gangster pictures — and whose fourth film would question the very system that gave us those works. They’d even end up doing another film about Old Hollywood down the line, one that’s a little kinder and more spiritual than cerebral, 2016’s Hail, Caesar! (The exchange between Barton and the elevator operator — “You read the Bible, Pete?” “Th’ Holy Bible? I think so. Anyways, I heard of it” — almost feels like a dry run for that later movie.)

But this dart to the jugular is the first to suggest that the Coens realize the game has been rigged in favor of the house since the get-go. By the end, Fink finds himself having sold both the contents of his brain in perpetuity and likely carrying a metaphorical version of his head around in a box. It ends, as all great movies do, on a beach, with Barton going through the looking glass and watching one more predator dive for yet another unsuspecting prey. Millions are to be had; all you have to give up is your soul. Don’t let this get around. Barton wanted to be in pictures. He should’ve been careful for what he wished for.