Bad Times at the El Royale review: Chris Hemsworth takes a sinister turn in this messy but stylish noir

It’s been six years since writer/director Drew Goddard won us over with his clever and witty feature debut The Cabin in the Woods, so we were keen to see how his long-awaited follow-up Bad Times at the El Royale would shape up.

The trailer promised a wild ride full of ’60s period style, weird goings-on, and Chris Hemsworth playing an evil, barely dressed maniac. What more could we possibly ask for?

But we did wonder – with such a frenetic offering, was there a danger that this could be a case of ’60s-style-over-substance? Well, the answer is ‘perhaps’, but Goddard’s flair is enough to make Bad Times‘s virtues outweigh its narrative flaws.

The El Royale is a once-lively hotel fallen on hard times somewhere near Lake Tahoe on the California/Nevada border (which literally runs through the middle of the building). When four mysterious strangers – a world-weary Catholic priest (Jeff Bridges), a lounge singer (Cynthia Erivo), an over-chatty vacuum-cleaner salesman (Jon Hamm) and a standoffish flower child (Dakota Johnson) – check in for the night, it seems that they would rather mind their own business and avoid any trouble.

But this is noir, so of course not everyone is who they seem. Through a series of unfortunate events – and some bloody deaths – trouble definitely finds them, and the El Royale reveals that it’s been hiding some secrets of its own. 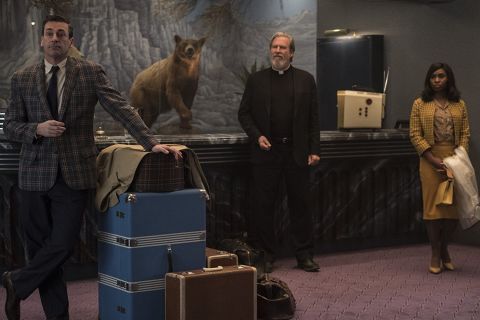 At the heart of Goddard’s movie is an incredibly strong and highly watchable cast. Bridges is at his best as a man torn by regret. British newcomer Erivo is spellbinding as the audience surrogate, and channels her award-winning stage career (she starred in Sister Act and The Color Purple) into some utterly haunting, a cappella ’60s hits. The Strangers: Prey at Night‘s Lewis Pullman sweats up a storm as the nervous concierge, and Hamm clearly had a wild time pouring his OTT drawl and oily charm all over the set. If there was any doubt left that Chris Hemsworth is both a talented and smart actor, that is entirely dispelled by his turn as a charismatic psychopath who coils sensuously across the screen in a clever and creepy subversion of his Hollywood hunk status.

Only Johnson really misses out, through no real fault of her own – her character is suitably intriguing for this neo-noir, but is let down by the thinnest backstory and least screen time.

Despite the surface differences between El Royale and Cabin in the Woods, Goddard’s distinctive style gives them a more similar feel than you might expect. The camera pans smoothly around the low-ceilinged rooms of the hotel, lingering on its cast’s faces and the lush period details, and the intense climax takes a hellish turn that wouldn’t be out of place in a horror movie. Goddard ramps the tension throughout, and throws in some genuine shocks that had the audience at our screening gasping out loud, as the El Royale slowly gives up its secrets. 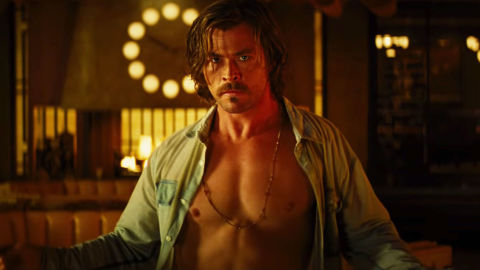 The film is so packed that, against all odds, its 140-minute run-time doesn’t drag. The problem that actually arises is that, with the backstories of multiple characters to explore and the film’s desire to surprise, shock and keep things moving forward, some plots are underdeveloped or altogether abandoned, plastered over instead by new narratives. We’d almost be inclined to suggest it would make a better TV miniseries, but its glossy filmic quality would be a sad loss. Perhaps some tighter editing and trading in some shocks for the sake of exposition and explanation would have drawn the narrative more tightly together, rather than leaving us holding a handful of unanswered questions when the credits roll.

Still, the style and charms of Bad Times at the El Royale far outweigh its flaws. If you want to enjoy some talented actors getting their noir on, this is the smart genre piece for you.

Bad Times at the El Royale will be released on October 12. Book tickets here.