James Cameron returns to Pandora, and to the ecological themes and visual bedazzlements of his 2009 blockbuster. 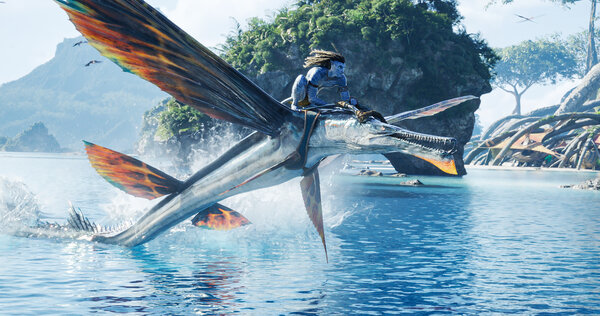 Way back in 2009, “Avatar” arrived on screens as a plausible and exciting vision of the movie future. Thirteen years later, “Avatar: The Way of Water” — the first of several long-awaited sequels directed by James Cameron — brings with it a ripple of nostalgia.

The throwback sensation may hit you even before the picture starts, as you unfold your 3-D glasses. When was the last time you put on a pair of those? Even the anticipation of seeing something genuinely new at the multiplex feels like an artifact of an earlier time, before streaming and the Marvel Universe took over.

The first “Avatar” fused Cameron’s faith in technological progress with his commitments to the primal pleasures of old-fashioned storytelling and the visceral delights of big-screen action. The 3-D effects and intricately rendered digital landscapes — the trees and flowers of the moon Pandora and the way creatures and machines swooped and barreled through them — felt like the beginning of something, the opening of a fresh horizon of imaginative possibility.

At the same time, the visual novelty was built on a sturdy foundation of familiar themes and genre tropes. “Avatar” was set on a fantastical world populated by soulful blue bipeds, but it wasn’t exactly (or only) science fiction. It was a revisionist western, an ecological fable, a post-Vietnam political allegory — a tale of romance, valor and revenge with traces of Homer, James Fenimore Cooper and “Star Trek” in its DNA.

All of that is also true of “The Way of Water,” which picks up the story and carries it from Pandora’s forests to its reefs and wetlands — an environment that inspires some new and dazzling effects. Where “Avatar” found inspiration in lizard-birds, airborne spores and jungle flowers, the sequel revels in aquatic wonders, above all a kind of armored whale called the tulkun.

Before we meet those beings — in a sequence that has the quiet awe of a nature documentary — we are brought up-to-date with the characters from the first movie, whom we may have forgotten about. Jake Sully, the conflicted U.S. Marine played by Sam Worthington who was the hero of “Avatar,” has remade his life among the Na’vi. Like them, he is now tall, slender and blue, with a mane of dark hair and a braid that connects him to members of other species. He’s fluent in Na’vi (though most of the dialogue is rendered in English).

The Return of ‘Avatar’

The director James Cameron takes us back to the world of Pandora for the sequel “Avatar: The Way of Water.”

Jake and Neytiri (Zoe Saldaña) are raising a brood of biological and adopted children, whose squabbles and adventures bring a youthful energy to the sometimes heavy, myth-laden narrative. There are four Na’vi kids, a pair each of brothers and sisters. Neteyam (Jamie Flatters), the older son, walks dutifully in Jake’s brave shadow, while his younger brother, Lo’ak (Britain Dalton), is a rebel and a hothead, looking for trouble and often finding it.

Their sisters are the adorable Tuk (Trinity Jo-Li Bliss) and the teenage Kiri, whose birth mother was the noble human scientist Grace Augustine. One of the film’s genuinely uncanny effects is that Sigourney Weaver, who played Dr. Augustine in the first film, plays Kiri in this one, her unmistakable face digitally de-aged and tinted blue. Like her mother, the girl has a mystical, Lorax-like connection to the trees and flowers of Pandora.

Jake and Neytiri’s sitcom-worthy household is completed by Spider (Jack Champion), a scampish human boy left behind by Quaritch (Stephen Lang), Jake’s former Marine commander and one of the villains of the original “Avatar.” Quaritch returns to Pandora with a new mandate to colonize it, and a squad of Na’vi-ized fighters to carry out the mission. He has a long-simmering vendetta against Jake, and much of “The Way of Water” is concerned less with large-scale imperial ambitions than with personal dramas of loyalty and betrayal.

With a running time of more than three hours — about 10 minutes shorter than “Jeanne Dielman, 23, Quai du Commerce, 1080 Bruxelles,” by recent acclamation the greatest movie of all time — “The Way of Water” is overloaded with character and incident. The final stretch, which feels somehow longer than the rest of it, runs aground in action movie bombast, and suggests that even a pop auteur as inventive and resourceful as Cameron may have run out of ideas when it comes to climactic fight sequences. There are a lot of those, in the air and underwater, fistic and fiery, sad and rousing, nearly every one of which will remind you of stuff you’ve seen a dozen times before.

That’s too bad, because much of the middle of “The Way of Water” restores the latent promise of newness — no small accomplishment in an era of wearying franchise overkill. Afraid that Quaritch and his men will bring slaughter to the forest, Jake and Neytiri seek the protection of Ronal (Kate Winslet) and Tonowari (Cliff Curtis), chieftains of a reef-dwelling Na’vi clan.

The differences among the Na’vi — physical as well as cultural — add an interesting new dimension to the anthropology of Pandora, and to the film’s aesthetic palette. The viewer discovers this variety in the company of the younger characters, especially Kiri and Lo’ak. Their adaptation to new surroundings — being teased for their skinny tails and clumsy arms, getting in fights and making new friends — gives the movie the buoyant, high-spirited sincerity of young-adult fiction.

Cameron’s embrace of the idealism of adolescence, of the capacity for moral outrage as well as wonder, is the emotional heart of the movie. You feel it in a horrifying scene of tulkun slaughter that aspires to the awful, stirring sublimity of the last chapters of “Moby-Dick,” and also in the restlessness of Lo’ak, Spider and Kiri as they try to figure out their roles. The next sequels, I suspect, will give them more time for that, but may also encumber them with more baggage.

I’m curious, and inclined — as I was in 2009 — to give this grand, muddled project the benefit of the doubt. Cameron’s ambitions are as sincere as they are self-contradictory. He wants to conquer the world in the name of the underdog, to celebrate nature by means of the most extravagant artifice, and to make everything new feel old again.