Another Grammys Ends With a White Winner Apologizing

At the end of what had been a top-notch collection of performances, Billie Eilish apologized to Megan The Stallion and some worrisome old trends resurface 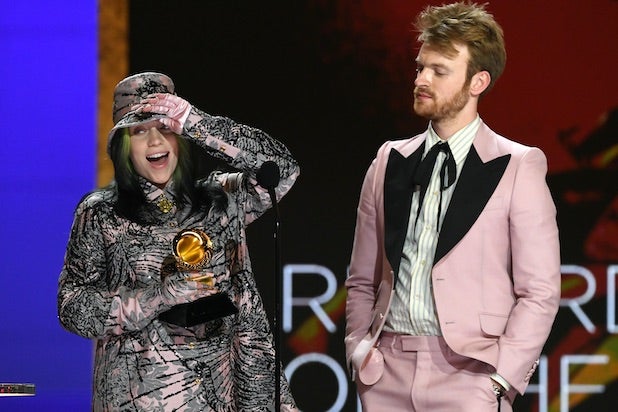 A few minutes away from pulling off a triumphant awards show during a pandemic, the Grammys reverted back to their old habits. And for the second time in the last four years, the show ended with a white winner apologizing to the Black artist she’d defeated for the top award of the night.

In 2017, it was Adele telling Beyonce that she “can’t possibly accept” the Album of the Year Grammy for “25,” because Beyonce deserved it for “Lemonade.” And this year, it was Billie Eilish telling Megan Thee Stallion that she thought about writing an acceptance speech that would explain why Megan deserved the Record of the Year award for “Savage,” but abandoned that idea because she was so sure that “Savage” would win.

But “Savage” didn’t win — Eilish’s “Everything I Wanted” did, a year after she had swept all the top awards at the 2020 Grammys. While the teenage star to all appearances enjoyed her victories last year, she was clearly troubled by her win this year — and maybe the Recording Academy should be, too, because it simply continues the trend that Black artists have more trouble than they should winning in the four general categories — Record of the Year, Album of the Year, Song of the Year and Best New Artist.

Beyonce, for instance, set a record on Sunday night with her 28th Grammy, which made her the winningest woman in Grammy history. But of those 28 wins, she has precisely one in the general categories, a Song of the Year award for “Single Ladies (Put a Ring on It)” in 2010. This year’s show was typical: She won in the video, Rap and R&B categories, but not in the Record of the Year or Song of the Year categories, in which she had three nominations for “Black Parade” and for her contributions to “Savage.”

Taylor Swift’s win in the Album of the Year category for “Folklore” was less shocking, since she was one of the favorites going into the show. And H.E.R.’s unexpected win for “I Can’t Breathe” in the Song of the Year category was a sign that the Academy will embrace Black artists in that category — especially since if you take that category title literally, it’s easy to see that her passionate song written after the death George Floyd indeed fits the bill.

But the night did leave an odd aftertaste, and a real question: How many more sheepish white artists have to feel bad about their wins before the Grammy voters start giving those big awards to people who don’t have to apologize for winning them?

Until that point in the show, the Grammys were seemingly pulling off something that has proven to be very difficult, putting on awards shows during a pandemic. That’s because the show has a big advantage over the Emmys, the Golden Globes, the Critics Choice Awards and every other kudos-fest that has been staged virtually and awkwardly over the last year.

The Grammys long ago stopped being an awards show, except peripherally. They’re a performance show, and as such, they found a satisfying way to scatter stages around the Los Angeles Convention Center and put on a series of performances that were far more full-bodied and engaging than the home Zoom concerts and socially-distanced variety shows that we’ve seen too many times over the past year.

There were awards sprinkled in there, of course — one in the first hour, two in the next 55 minutes until a flurry of three more ended the second hour — but the Grammys have been handing out the vast majority of its awards off the air for decades. And the awards themselves sometimes struggled not to seem beside-the-point during Sunday’s show. I mean, how can we tell how hard the winner is trying to look surprised and how hard the losers are trying to act gracious if they’re all wearing masks?

For the most part, this year’s show came down to the performances, most of which took place inside the Convention Center on a number of stages arranged around a large open space (although at some point the numbers grew so elaborate that they started feeling as if they were coming from separate soundstages rather than a performance space).

And while the format lost the sense that these performances were happening in a limited, specific space inside a theater, the lineup of artists delivered at least as well and possibly better than any recent Grammy show that had the advantage of 15,000 nominees and fans in the house, which is saying something.

Getting back to those awards, they were for the most part a celebration of strong women and timely statements. They also had a sense of variety that had been missing lately, when the voters had given the top three awards — Record of the Year, Album of the Year and Song of the Year — to the same artist in three of the last four years: Eilish last year, Bruno Mars in 2018 and Adele in 2017. This year, four different artists won in the four categories.

In other categories, Grammy voters showed a propensity to vote for musicians who’d died recently: John Prine won two awards in the American Roots categories; Chick Corea won two in Jazz categories; the Best Reggae Album category was won by Toots and the Maytals’ “Got to Be Tough,” the band’s last album before the death of lead singer Toots Hibbert; and the Best Contemporary Classical Composition was won by Christopher Rouse’s Symphony No. 5, which was written in 2015 but not recorded until after the composer’s death in 2019. Voting, by the way, took place after the deaths of Hibbert and Prine, but before Corea’s death.

Those awards were all handed off in the pre-telecast ceremony, but the show itself had the most elaborate In Memoriam sequence ever, including different performances paying tribute to Little Richard, Lionel Richie and John Prince, and then a searing rendition of “You’ll Never Walk Alone” from Brittany Howard that would have been even more impressive if Howard hadn’t repeated it in a Johnny Walker ad during the ensuing commercial break.

As usual at the Grammys, the scope and range of the awards were impressive. It’s hard to argue with giving awards to Prine’s sublime farewell song, “I Remember Everything”; Fiona Apple’s bold “Fetch the Bolt Cutters” album; bluesman Bobby Rush’s rough-hewn and scorching “Rawer Than Raw”; the music of largely forgotten British composer (and suffragette) Dame Ethel Smyth; Gillian Welch and David Rawlings’ folk gem “All the Good Times”; and Gustavo Dudamel and the L.A. Philharmonic’s magnificent cycle of Charles Ives’ symphonies, among others.

And then there are the quintessentially weird Grammy moments: Rachel Maddow beating Ken Jennings, Ronan Farrow, Meryl Streep and Flea for Best Spoken Word Album, Eilish winning an award for the theme song to a James Bond movie that won’t be released for another seven months, and a compilation of music from Mister Rogers beating Nat King Cole and Prince in the Best Historical Album category.

Did those things make up for The Weeknd’s snubs, or for the tainted Best Children’s Music category, where three of the five nominees withdrew their names to protest the category’s lack of diversity? Of course not. The Grammys still have some serious reputation-cleaning to do — and by giving the last award of the night to somebody who felt compelled to apologize for winning, they made that crystal clear.