Going against nice-guy type (at first), the star plays a misanthrope who’s pulled into caring for a neighboring family in need. 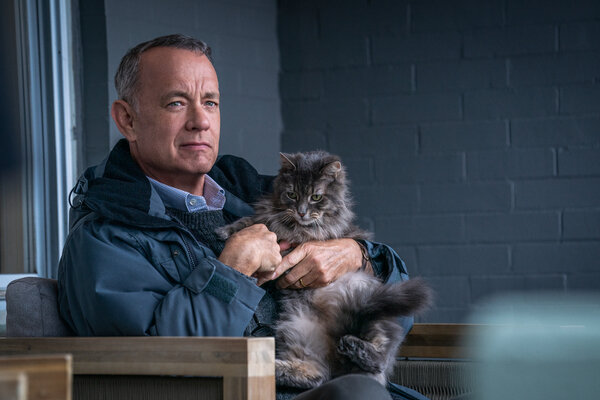 In 2016, reviewing the film “A Man Called Ove” for this newspaper, I mused: “Sweden’s official entry for a best foreign-language film at the Academy Awards proves that Swedish pictures can be just as sentimental and conventionally heartwarming as Hollywood ones.”

That movie, based on a best-selling Swedish novel, is about a thoroughgoing grump who becomes suicidal after the death of his wife, until interactions with new neighbors soften his heart. One supposes an American remake was inevitable, and here it is, directed by Marc Forster and starring Tom Hanks, with the main character renamed Otto.

Usually U.S. remakes of foreign films tend to homogenize the source material. But “A Man Called Otto” is not only more bloated than the Swedish film, it’s more outré, in a way that’s hard to pin down.

Forster handles the flashback of the back story (in which the star’s son, Truman Hanks, plays a younger Otto) in gauzy-arty fashion. When the older Otto — Hanks reaches back to his excellent work in “Catch Me If You Can” to nail down the man’s overarching irritability — contemplates his happy marriage, his mind always goes back to its earliest times. It’s curious, until the film reveals why it has avoided more recent memories, but by then the omission feels like a withholding cheat.

Otherwise, obviousness rules the day here. When Otto visits an incapacitated former friend, the soundtrack spins Kenny Dorham’s version of the jazz chestnut “Old Folks.” Which is always nice to hear, admittedly. Later, a teenager initially upbraided by Otto tells him that Otto’s wife, who had been a schoolteacher, “was the only person who didn’t treat me like a freak, because I’m transgender.” As the television icon Marcia Brady once put it, “Oh my nose!”