A History of the Cheetah in ‘Wonder Woman’

While the Cheetah may not be the most popular cat woman DC Comics has been responsible for, her high-profile appearance in the “Wonder Woman” sequel has a chance to earn her a whole new generation of fans.

“Wonder Woman 1984” (in theaters and streaming on HBO Max) has Gal Gadot reprising her role as Diana, now navigating life (and shoulder pads) in the 1980s while maintaining her superhero side gig. And Kristen Wiig joins as Diana’s colleague Barbara Minerva, whose issues with self-confidence ultimately transform when she emerges as the Cheetah. While that character has undergone a number of personality changes in the comics over the years, her complicated relationship with Wonder Woman has been a constant thread that is continued in the new film.

Here’s a look at the history of the Cheetah, from her origins as a socialite wearing a cat costume to her modern interpretation as a half-cat, half-woman beast. 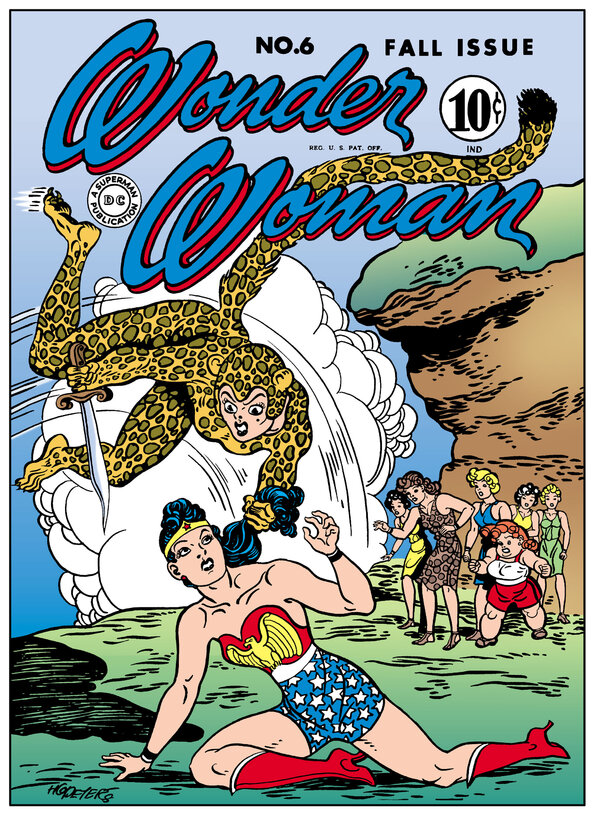 The Wonder Woman creator William Moulton Marston first introduced the Cheetah in 1943, with “Wonder Woman” No. 6. The original Cheetah is a wealthy socialite named Priscilla Rich who becomes intensely jealous of the attention Diana receives for her abilities. Her envy manifests into a split personality called the Cheetah. While she has no super powers of her own, Priscilla dons a cheetah costume and engages in a series of elaborate schemes to try to bring down her rival and ruin her reputation. Wonder Woman defeats her and uses her lasso of truth to uncover the Cheetah’s true identity, causing Priscilla to reveal her insecurities. Wonder Woman takes pity on her and allows her to stay as a captive of the Amazons to try to reform her ways.

Those rehabilitation efforts end up having mixed results, with Priscilla returning as the Cheetah several times over the next 40 years as Wonder Woman continued to offer her opportunities to redeem herself. Priscilla eventually retires from her Cheetah lifestyle and dies of an unspecified illness, with her niece Deborah briefly taking over the alter ego.

The writers George Pérez and Len Wein introduced a different version of the Cheetah in 1987 with “Wonder Woman” No. 7 (the series restarted from No. 1 earlier that year). Here, Barbara Minerva is a greedy and selfish archaeologist who forces an African tribe to perform a ritual on her, hoping it will give her immortality. Instead, she receives the ability to transform into the catlike Cheetah, gaining superhuman strength and speed; the ritual partially backfires, and her human form becomes frail and weak. As a result, she can only live up to her true potential as the Cheetah.

Barbara is much less sympathetic than Priscilla, and she’s shown murdering people even before she turns into the Cheetah. She first encounters Wonder Woman while trying to steal her golden lasso. She presents herself as an ally to earn Wonder Woman’s trust, but her plot fails when holding the lasso of truth causes her to reveal her true intentions. She develops a growing hatred for Wonder Woman over the years, yet the Amazon Princess still often takes pity on Barbara, even saving her life when she’s in peril. The two share a degree of mutual respect, occasionally fighting together against a common enemy, though ultimately Barbara still harbors jealousy.

In 2016, Barbara received an updated back story from the writer Greg Rucka that made her Cheetah fate more tragic. In this version, Barbara is Diana’s friend, and is cursed by the plant god Urzkartaga during an ill-fated archaeological expedition. She becomes resentful of Diana for introducing her to the world of magic and gods, and dooming her to be a monster. While the previous iteration of Barbara was able to transform back into a human, this one is trapped in her Cheetah form. She and Wonder Woman eventually work together to kill Urzkartaga, and she returns to human, but her transformation is short-lived. She ultimately sacrifices herself to the curse once again and decides she’s better off as the Cheetah.