Prince Andrew’s relationship with the late Jeffrey Epstein — along with the sexual assault allegations against the prince himself — has become a major focal point in world news and within the British royal family.

Andrew, who ran in the same social circles as Epstein — a convicted sex offender and alleged sex trafficker who died in prison — was forced to step away from his royal duties after his bombshell interview with the BBC in November 2019. In the interview, Andrew claimed that he was not aware of Epstein’s crimes and denied he ever met nor sexually assaulted Virginia Roberts Giuffre. Giuffre had claimed in multiple interviews that she was trafficked to Andrew by Epstein from 1999-2002 — as a minor — in London, New York, and on Epstein’s private island, People noted. However, Andrew has categorically denied the allegations and claimed that he would assist in the FBI’s investigation into Epstein and Ghislaine Maxwell’s crimes.

Throughout the course of Epstein’s investigation, though, prosecutors in New York have said that Andrew offered “zero cooperation,” according to The New York Times. But things might be changing after Giuffre filed a lawsuit against Andrew on August 9 for claiming he had sexually assaulted her when she was underage. “I was trafficked to him and sexually abused by him,” her statement read (via People). Now, weeks after Giuffre’s filing, Andrew has been served papers in England. 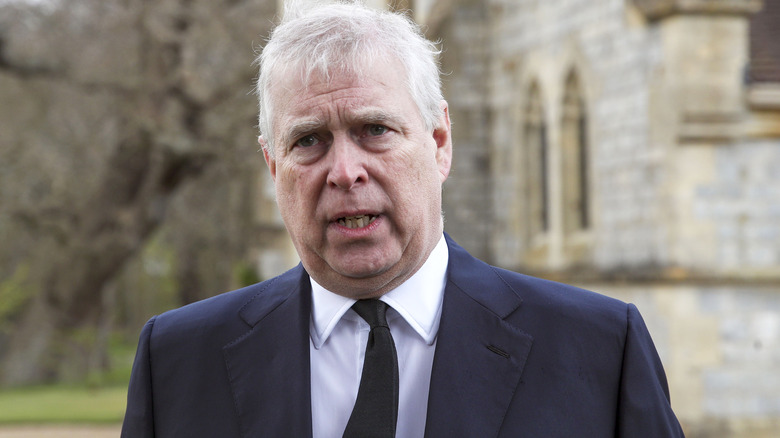 On September 10, a new court filing in Manhattan federal court stated that Prince Andrew, the Duke of York, was served with a civil suit by Virginia Roberts Giuffre, who accused him of having sex with her while she was underage. According to CNBC, Andrew was served papers at his home on August 27 after a one-day delay because “security there had been instructed not to allow anyone” onto the premises of his home. The suit was eventually handed to a police officer at the Royal Lodge “and that this matter would then be forwarded on to the legal team,” the outlet noted.

It is unclear how Andrew will respond to the suit, as he’s reportedly been trying to avoid the glare of the public eye and has been visiting his mother, Queen Elizabeth, at Balmoral Castle in the past week (via The Cut). An insider told The Sun that Andrew had been “going stir-crazy inside Royal Lodge for the past few weeks,” after being served with the papers.

Buckingham Palace has yet to respond to the latest developments of Andrew’s case, though the institution previously “emphatically denied that the Duke of York had any form of sexual contact or relationship with Virginia Roberts. Any claim to the contrary is false and without foundation,” per the BBC.

If you or anyone you know has been a victim of sexual assault, help is available. Visit the Rape, Abuse & Incest National Network website or contact RAINN’s National Helpline at 1-800-656-HOPE (4673).