Drake is an ardent sports lover who goes out of his way to show support for the athletes and sports teams that he loves.

The Toronto Raptors are one of Drake’s favorite sports teams. He is known to be a passionate and loyal supporter of the Raptors, and he was named an ambassador for the team back in 2013.

But some claim that Drake is cursed and that any athlete or team he supports suffers bad luck.

If you’ve been wondering what the Drake Curse is and whether it’s still alive in 2020, read on.

During the 2019 NBA playoffs, Drake was always courtside to support the Raptors. He often ended up engaging in verbal duels with players from the opposing team.

For instance, during Game 1 of the 2019 NBA finals between The Toronto Raptors and Golden State Warriors in May 2019, the rapper relentlessly trolled the Warriors’ players, including Steph Curry. He wore an autographed Toronto Raptors Dell Curry jersey to remind the Curry that his dad played with the Toronto Raptors in the 1990s.

After the Raptors won the game 118-109, Drake got into a heated exchange with the Warriors’ Draymond Green.

It was allegedly that Drake called Green “trash.”

How did the Drake Curse start?

Many teams that the Toronto Raptors played against since Drake became active as the team’s courtside mascot detested the rapper’s sideline antics and complained about them.

Although the idea that Drake is cursed appears to date back to 2015, it gained more traction during the 2019 NBA Finals, purportedly as an explanation of some of the Raptor’s most embarrassing losses since the rapper was made named an ambassador for the team in 2013.

People began circulating rumors that the Toronto Raptors might want to do away with the rapper because he was afflicted with a curse.

The rumor mongers claimed that due to the Drake Curse, any athlete or team that Drake openly supports before a game will eventually go on to lose that game, regardless of the odds.

Alleged victims of the Drake Curse over the years

Promoters of the Drake Curse cited several cases to support their claim.

One of the most cited incidents involved the French soccer player Layvin Kurzawa. Drake’s detractors claimed that Kurzawa’s team, Paris Saint-Germain, suffered their worst defeat in years because Drake posed for a pre-match photo with the player.

The highly-favored PSG lost 5-1 to the underdogs, Lille. 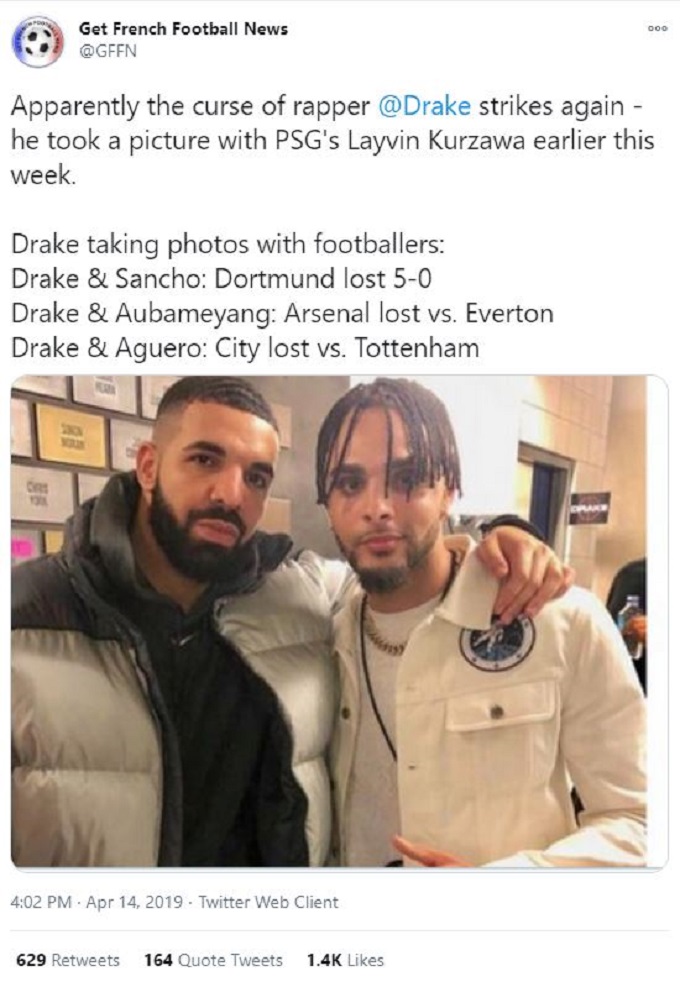 Others recalled that Conor McGregor lost to Khabib Nurmagomedov at UFC 299 in October 2018 after Drake came out to support him.

The Drake Curse has also been blamed for Serena Williams’ loss in the 2015 U.S. Open semi-finals to unseeded Roberta Vinci.

Drake’s detractors also claimed that his support for Alabama Crimson Tide inflicted a curse that led the team to lose to Clemson in the college football national championship in January 2019.

The heavyweight boxing champion Anthony Joshua is allegedly another victim of the Drake Curse.

In June 2019, Joshua tweeted a photo of himself with Drake before his match against Andy Ruiz Jr., boasting that he was going to break the Drake Curse.

Joshua ended up being defeated by the underdog.

Is the Drake Curse now broken?

Drake’s supporters claim that the Drake Curse was broken after the Raptors defeated the Warriors 4-2 in the 2019 NBA finals to win the championship.

Since then, less has been heard about the Drake Curse, but some claim that the latest victims in 2020 are Lamar Jackson and his team, the Baltimore Ravens.

The Ravens lost 28-12 to the Tennessee Titans in the Divisional Round of the playoffs.

Drake allegedly inflicted his curse on the team after he took to Instagram to wish Jackson a happy birthday only days before the game.

But Lamar Jackson dismissed the claim that there was a Drake Curse on the Ravens.