Just days after being taken into police custody for the alleged possession of ‘illegal’ narcotics, the ‘Down on My Luck’ spitter takes to social media to announce his release, saying, ‘God works in mysterious ways.’

AceShowbiz –Vic Mensa has expressed his gratitude after being released from prison. The “Down on My Luck” spitter was freed from jail just days following his arrest at an airport for the alleged possession of “illegal” narcotics.

The 28-year-old hip-hop star took to his Twitter account on Tuesday, January 18 to announce his release from jail. “Wow what a trip,” he simply wrote. A few hours later, he added, “I’m freeeeeee.” He went on to thank those who gave him outpouring support, saying, “Love you all,” before noting, “God works in mysterious ways.” However, he didn’t offer any other information about his jail release. 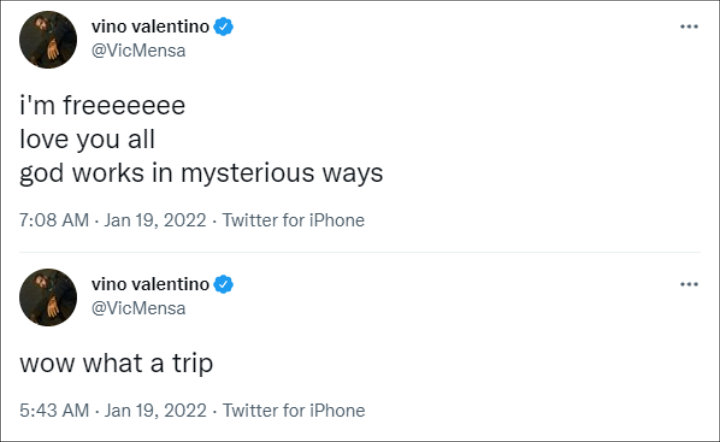 Vic Mensa returned to Twitter after being released from jail.

Upon learning of his prison release, fans were quick to share their relief. “Welcome back @VicMensa…that was some Fear and loathing in las Vegas s**t….Respect,” one fan replied. Another chimed in, “I’m so glad you are ok!!!”

Vic, born Victor Kwesi Mensah, was booked at Dulles International Airport in Virginia on Saturday, January 15, as confirmed by Daniel Escobedo, a spokesperson for U.S. Customs and Border Protection. The Chicago native was allegedly carrying Lysergic Acid Diethylamide (LSD) and Psilocybin. He was placed into custody by the Metropolitan Washington Airport Authority.

“Narcotics interdiction remains a Customs and Border Protection enforcement priority,” Daniel stated. The Director for CBP’s Area Port of Washington, D.C. continued to say, “We remain committed to working closely with our federal, state and local law enforcement partners to ensure that those who transport illegal narcotics into the United States are investigated and prosecuted.”

Vic had been in Ghana since December last year. Then earlier this month, he was joined by fellow rapper Chance the Rapper. The duo toured some parts of the country and met with the country’s President Nana Addo Dankwa Akufo-Addo at the Flagstaff House in Accra, Ghana. They also met other hip-hop artists, including Darkovibes, Sarkodie, King Promise and M.anifest.