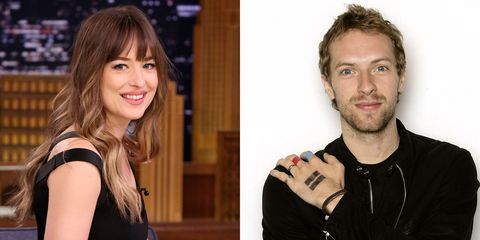 In case you were still baffled by the news that Dakota Johnson and Chris Martin are dating, strap in, because within one hour a Dakota pregnancy rumor came and went. TMZ reported the pregnancy earlier today, but a rep for Dakota denied the story.

According to TMZ, the pair is expecting and they already had a gender reveal party this weekend. Paparazzi caught celebrities walking into Chris’s home and there were blue and pink balloons tied into arches.

But according to Dakota’s rep, they were all actually there to celebrate her 29th birthday. So the blue and pink balloons were simply a party theme choice, then?

The couple has been notoriously private about their relationship. About a year ago, rumors started circulating that they were together, but to this day neither have confirmed it. In a recent interview with Tatler, Dakota said, “I’m not going to talk about it, but I am very happy.” They reportedly have matching infinity symbol tattoos, according to People.

Weirdly enough, Chris’s ex Gwyneth Paltrow got remarried last weekend to Brad Falchuck. Chris did not attend because he and Dakota were at The Global Citizen Festival in New York City.