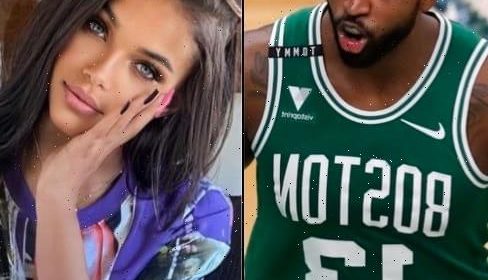 Tristan Thompson, an NBA player who often challenges opposing shots at the rim, has now issued a challenge of a different kind to Sydney Chase.

Show me the text messages I allegedly sent you, he’s saying.

The ones you claim prove that I shot my load all over your writhing body.

Perhaps Thompson did not use these exact, explicit words.

However, the lead attorney for Thompson has responded to Sydney Chase’s latest allegations — in which she alleges to possess numerous messages from Tristan that can out him as a cheater — by sending her a letter.

It’s rather explicit in its own way, too.

“You have stated to the media that ‘I will not be called a liar,’” reads the statement by Marty Singer, obtained by Page Six, begins.

“You claim that your statements about supposedly receiving texts from my client are true.

“You also were reading and quoting from those fictitious texts.

“You claim that those texts you allegedly received prove you had an affair with my client.”

As a refresher: Chase went on a podcast last week and said she slept with Thompson at some point over the last few months.

While he was very much in a relationship with Khloe Kardashian.

The 23-year old model even described Tristan’s penis and went on to say he told her he was single any time she asked about his status.

“He banged me,” Chase said simply.

It’s not hard to believe that Tristan Thompson would cheat on Khloe Kardashian, of course, because he’s done so multiple times in the past.

Moreover, unlike those past times he’s been accused of slipping it to another woman, Thompson is firing back hard in this case.

First, he sent Chase a cease-and-desist letter, demanding she quiet down or risk a lawsuit.

In response, Chase doubled down on her allegation.

“I’m moving forward with the truth & am choosing not to comply… I will not be called a liar,” she said on Instagram.

Thompson’s attorney, though, isn’t just accepting those words and moving on.

Singer says Chase refuses to produce these suppose text messages from his client.

“On three separate occasions including my email today, we have asked you to give us copies of the texts you claim you received from my client, but you have refused,” he said on Thursday.

“Articles published by multiple media outlets state that they also asked you for copies of the purported texts to prove their existence.

“While you claim that your statements about the texts are not false, you persistently refuse to provide evidence that they exist and allegedly support your claims…”

And why is this?

“The inescapable conclusion is that they do not exist,” wrote the lawyer in his letter.

“We again demand that you stop defaming Mr. Thompson with defamatory falsehoods.

“If you persist in this wrongful conduct, you will continue to be exposed to significant liability.”

Chase has elsewhere claimed that both Thompson and Kardashian have messaged her privately since her bombshell interview.

She has not shown these messages to anyone, however.

And yet… Chase is already profiting from her allegation.

She’s scheduled to host an evening at the Las Vegas Hustler Club on Friday, and has set up a pay-to-view OnlyFans account — while even shopping a reality show.