Tori Spelling: My Fake Pregnancy Prank Was Funny AF! You Guys Just Didn’t Get it! 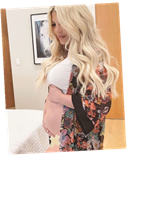 April Fools’ Day was last week, and as usual, celebs from all corners of the entertainment industry attempted ill-advised pranks, despite the fact that most of them have the comedic chops of a Family Circus cartoon.

It’s a high-risk, low-reward endeavor, as the stars frequently infuriate the masses with their awkward, insensitive attempts at humor, while the list of classic celebrity April Fools’ pranks that we’re all still laughing about years later is literally non-existent.

Some years, there are several duds, and there’s some debate over which celeb fell on their face the hardest.

This year, however, there’s no need for argument, as the entire world is in agreement that Tori Spelling claimed the top spot with a gag that was both offensive and wildly unfunny!

It all started when Tori posted the photo above.

She captioned it “No. 6,” indicating, of course, that she’s pragnant with her sixth child.

At first, some folks were fooled by Spelling’s fake pregnancy prank, and they offered their sincere congratulations in the comments section.

But it wasn’t long before people started to catch on to the fact that Tori had justr executed a massive social media blunder.

“I really hope you aren’t using a pregnancy as an April Fools joke considering there are so many women out there who wish they could have just one child,” one commenter wrote.

“You have been blessed with 5, please have compassion and empathy. This is nothing to joke about!”

“I super hope this is true, in that case congratulations! If this is an April fools joke, EXTREMELY poor taste,” another added.

“I really hope this isn’t an April Fools joke, this would be cruel to all of the mommas who have lost babies or are having a difficult time getting pregnant.”

Pregnancy is a very serious thing — as are such miscarriages and infertility issues.

As a mother of five who’s been in the public eye her entire life, Tori should’ve known that triggering people in this way was not worth whatever clout she hoped to gain from her painfully dumb joke.

Instead, she’s decided to issue a self-serving apology rather than just deleting the damn thing (yes, it’s still on her page, believe it or not).

“Every week, magazine and press outlets ask if I am pregnant. To set the record straight, I am not,” she began.

“The fact is, after my fifth baby, my body didn’t bounce back like it had before. That’s when the constant questions of ‘yet another’ pregnancy first began.

“Unless you’re in the public eye, it is hard to understand what it feels like to be body shamed so publicly,” she continued.

“I feel like I have to constantly defend my body when instead, I should be honoring it for the miracle of life it gave me five times.”

“I know that pregnancy is an extreme blessing. And I would never intentionally poke fun at losing a child or not being able to carry one. I myself have miscarried.”

Tori went on to claim that her goal was to “to simply turn the tables for once on the press.”

She added, “They constantly create wild and often hurtful stories about me, my body, and my family.”

Obviously, this is a load of crap, as the media only reports on Tori Spelling when she pulls a stunt like this.

“For those of you that are hurt, I hear you. I love you. I welcome your stories and I will try my best to be there to support you,” she concluded.

“Please accept this as a virtual hug to my entire community.”

As TooFab points out, the list of stars who have been dragged for April Fools’ fake pregnancy pranks is surprisingly long.

And the list of dumb jokes that landed Tori in hot water?

Yeah, that’s a pretty lengthy one, too.

Remember when people called Tori a racist because she posted offensive photos of her daughter dressed up as a “Black” character?

Tori claimed to have learned a hard lesson from that incident — but clearly, that didn’t happen.