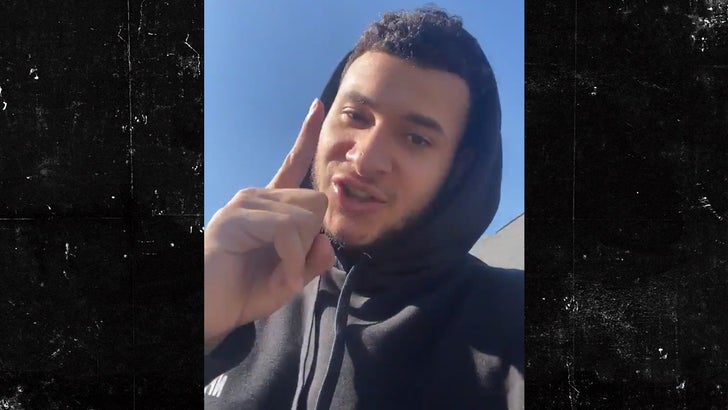 7:43 AM PT — Farley said in a video statement Wednesday he’s “feeling great” despite the positive test … adding he will not let COVID ruin one of the best moments of his life.

“I’m okay. I feel great,” Farley said. “I’m asymptomatic. I’m still in good spirit. I’m not going to let nothing and nobody ruin this week for me. This is a dream come true.”

Caleb Farley — a former Va. Tech star who’s expected to be a top 20 pick in the NFL Draft on Thursday — has tested positive for COVID and has now been barred from the league’s official party.

The DB’s agent, Drew Rosenhaus, made the announcement in a statement to Pro Football Talk on Wednesday … saying the 22-year-old is feeling fine, but will now not attend the NFL’s in-person draft event in Cleveland this week.

“Caleb Farley tested positive for Covid 19 yesterday on a test administered by the NFL,” Rosenhaus said.

“He is totally asymptomatic and feels completely normal. However, he won’t be allowed to attend the draft in Cleveland.”

Farley had been just 1 of 13 former college football stars scheduled to be in Ohio for the annual selection process … so it’s obviously a big bummer for the CB.

But, Farley’s draft night should still be a memorable one nonetheless — he’s been projected by draft experts to possibly go as high as #9 overall to the Denver Broncos.

Farley — who opted to sit out the 2020 season over COVID concerns — played in 23 games in his 2-year career at Virginia Tech, logging six total interceptions.