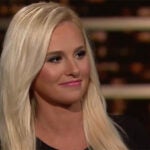 In response to one clip from an airport in Detroit, Federalist editor Christopher Bedford observed “people acting like animals and staff and stewardesses who are treating people like cattle.” He commented on people’s appearances and lamented that he can no longer order an in-flight beer “because people want to act like animals.”

Former White House press secretary and “Outnumbered” co-host Kayleigh McEnany said people should treat flight attendants and staff with more kindness, adding that they have experienced a challenging year. She added that airlines should lift mask mandates, especially for those already vaccinated.

Lahren disagreed. That’s when she said some flight attendants are “becoming almost Nazis of the air.”

On social media, Lahren has called people who wear masks “sheep,” urged people to burn their masks and announced that she will not be getting vaccinated.

See the video clip from Thursday’s show up top.